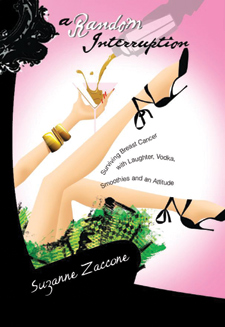 Upon her diagnosis in 2007, Hinsdale resident Suzanne Zaccone began writing emails to friends and family concerned about her condition. These missives were filled with test details, opinions, fears, and tips.

Eventually, the grateful people on her email list, which grew to include 175 people in 15 different countries, suggested she write a book.

The book chronicles her journey from diagnosis to the last of her procedures. It also includes the stories of several patients she met along the way, because she wanted to convey that everyone’s experience with cancer is different. Suzanne’s goal was to help people who are diagnosed to know what types of questions they should ask their doctors.

With more than 4,500 copies of the book sold, doctors are reporting back that patients are indeed asking the right questions, many as they visit the doctor’s office with a copy of the book in hand.

Proceeds from the book are being directed toward creating a fellowship for doctors interested in learning microsurgical techniques at The University of Chicago Cancer Research Hospital. The book, along with events supported by the Zaccone Family Foundation have funded three fellowships, plus a fourth that is currently under way.

While being useful to anyone diagnosed with the disease, Suzanne also sees the book as relevant to anyone facing a major life challenge or period of transition. Reading her words is like having this warm, funny, accomplished woman by your side, telling you that she got through this and you can, too. Available at zacconefamilyfoundation.com and arandominterruption.com. 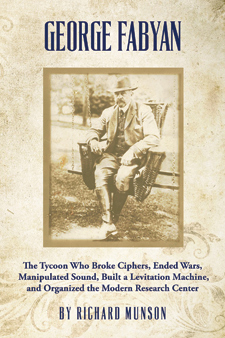 The top-secret National Security Agency has been so buzzed about in 2013 that it is surprising to learn of an eccentric man of great wealth named George Fabyan who put the foundation for the organization in place nearly 100 years ago.

This Gilded Age tycoon sponsored and inspired a “community of thinkers” who changed how we wage wars and keep secrets, how we transmit sound and design buildings, and how we stimulate scientific advances. Fabyan created perhaps the first independent research center, and even helped end World War I by breaking German codes, capturing foreign terrorists, and developing more effective trench mortars.

Fabyan also funded some follies. He tried to create a levitation machine that would defy gravity, and he spent millions trying to prove that Sir Francis Bacon was the actual author of William Shakespeare’s plays.

Despite this whimsical streak, Fabyan stands alone among American businessmen, receiving the French Medal of Honor, Japan’s Order of the Rising Sun, and commendations from the United States National Security Agency.

This is Hinsdale resident Richard Munson’s fourth book. His previous titles are From Edison to Enron, a history of the electricity industry, The Cardinals of Capitol Hill, a behind-the-scenes look at appropriations, and Cousteau: The Captain and His World, about the undersea explorer. He has a wonderful way of engaging the reader through his choice of subjects and deft tale-telling.   Available on amazon.com.