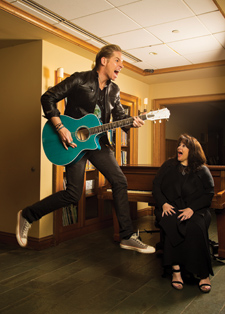 Celebrities often attach their names to various products: perfumes, shoes, skin care—even bottled water. Sometimes it reflects their personal style; more rarely, it directly correlates with their line of work.  Local celeb and Lovehammers lead singer Marty Casey, however, infuses a bit of his music into every piece of jewelry he designs for the Marty Casey Silver Elements Collection.

“The pieces initially come from the lyrics of a song,” says Marty, pointing to a dog tag necklace with an engraved tree motif.  The pendant is the first piece he designed, and it is inspired by his hit single, “Trees,” which first aired on the reality TV show Rock Star: INXS that launched him to international stardom.

The latest item is a silver guitar pick charm that ties into the collection’s newest endeavor: Strike a Chord.  After seeing fans, friends, and business associates afflicted with cancer, Marty decided to donate a portion of the sales from the charm to the American Cancer Association.  At an affordable $40 price point, it’s the perfect gift that keeps on giving.

“It has a great message to promote awareness, especially during the holiday season, when one thinks of giving back,” says Marty.

Marty is no stranger to giving back, both to the community around which he was raised and the world at large.  In 2009, he toured New Zealand to raise money for cancer.  His “Trees” pendant donated sales to American Forests. Teaming up with Hinsdale’s fashion veteran Marla Zegart for the jewelry line was his personal way of doing something local; he grew up in Hickory Hills and attended Stagg High School.

“I’ve been around the world many times, but Chicago is still my home and everything that I know—my family and friends are the nucleus of who I am,” says Marty.  “Charity and doing great things really starts at home.”

It was a fate meeting five years ago when Marla approached  Marty after a Lovehammers concert with an idea for collaboration. Marty jumped on board to design a piece, but he had no idea it would lead to the cult following it is today.

“In order to be taken seriously, you have to put the time into it…and it takes a long time to be ready, kind of like a band with music,” says Marty. “By the time you get to a label, you have to have the whole album in play.”

The chemistry between the two electrifies the air in a way that one could almost feel the creativity bouncing between the dynamic duo.  Marla, dressed every bit fashionista in head-to-toe black with red lips, and Marty, wearing low-top sneakers and a leather jacket, are both donning trinkets from the line. Marla describes her style as “dramatic, classic with a twist, a modern edge—but still timeless.” Marty, on the other hand, likes pieces that attract attention without truly asking for it.

“They have to be dynamic enough to be inquisitive, like, ‘What is that? I haven’t seen it before’…a piece with a story behind it,” says Marty.

Their complementary styles combine into ready-to-wear statement pieces that are subtle yet eye-catching, and of course, rock and roll. Although the market is mostly female, most of the items are unisex. In keeping with contemporary, the go-to metal is silver, although they are toying with adding touches of gold. The partners are always brainstorming new ideas and experimenting with fabrics and materials, such as onyx, semi-precious stones and, leather.  A recent collaboration with Swarovski will produce a bar ring showcasing its crystals.

“You have to have things that reflect your point of view, taste level, but also have something that the customer is going to respond to,” Marla explains.

After successfully launching the collection, Marty and Marla realized just how much synergy exists between the music and fashion industries. A trunk show usually accompanies Marty’s rock concerts, and fans can be seen mixing and matching the jewelry, leather bags, and scarves. Before they offered earrings, they saw a fan turn the charms into earrings, or another took two bracelets to form a necklace. “They’re remixing it,” laughs Marty. “They’re doing mash ups.”

The jewelry line thrives off of the feedback of the fans, too. Last year, they held a contest where fans submitted ideas of what they’d like to see in the collection, with the winner being a lock and key necklace. A fan approached them saying she’d love more earrings—they added more earrings. The one-on-one interaction with Marty’s fans is an invaluable gain for the line, for they make a vehemently loyal and tight-knit community.

“Through Marty’s music, the fans have created lasting friendships,” says Marla. “That’s how this initially took off.”

“Just like with music, you have to get people that support you, and stand behind you, and believe in what you’re doing,” adds Marty.

Aside from trunk shows, the Silver Elements Collection has seasonal shows throughout the year, where those in attendance are also treated to a personal performance from the singer. Past venues have included the House of Blues, Crimson Lounge, Zebra Lounge, and the Art Institute. On December 7, there will be a show held at Marla’s pop-up store in Oak Brook, a space on York Road above Alan Rocca Fine Jewelry. The collection can be viewed or purchased online at silverelementscollection.com. The site also updates information on future trunk shows, events, and tour dates.

“What can we do next? What haven’t we done yet? That’s what we’re figuring out,” says Marty. “You have to change enough and grow enough yet stay the same at the core.”

Marla Zegart’s Excentrique Elements will be opening up a pop up store at 3824 York Road, located on the 2nd Floor above Alan Rocca jewelers in Oak Brook. The store will open on Friday November 29 and will be open until December 31.