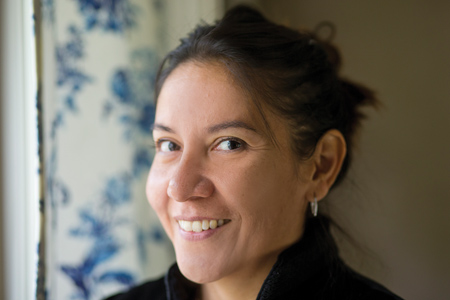 Step into The Lashe Spot in Hinsdale and a soft-spoken woman with a welcoming smile will look up from her chair in the lavender-painted sanctuary to greet you. For five years, Graciela “Shelly” Calderon, an eyelash technician, has amassed a devoted following thanks to her skill and sensitivity. From students who save up for a set of homecoming or prom lashes to a septuagenarian who visits for regular fill-ins, Shelly treats everyone with kindness and care.

These happy clients are invariably surprised to learn that Shelly spent 18 years in the United States Army, including extensive time in Afghanistan. To illustrate her length of service, she explains, “I went through three uniform changes; the camouflage to the desert camouflage to the digital camouflage that is worn now.”

Petite and with a reserved bearing, Shelly may not fit the image many of us have of a soldier, but she enjoyed her time in the armed forces. “I liked what I did, and I feel like it mattered. In the same way that when a teacher is teaching, I feel like I left my footprint,” she says.

For her, the Army was a calling, first felt when watching M*A*S*H on television with her dad. “Camaraderie helps you get through any situation that you think might be tough,” she says. She shares that most of the people she served with also felt this calling, many of them following the terrorist attacks of 2001.

“I was always curious about how the soldiers got through wartime. It was people—whether it was letters from home or a friend in the field—people help you through,” she says. Shelly adds that the care packages that churches and other groups put together to send to the soldiers stationed overseas mean a great deal to those who receive them. This is a good reminder for all of us to think about from Veteran’s Day through the end of the year and beyond. If it’s been a while since your organization put together some comforts from home for those serving, it might be time to do it again.

Back in civilian life, Shelly finds time to honor her service and the service of those before and after her. On Veterans Day 2011, she joined a group of veterans at her nephew’s school in Naperville. After the formal presentation, the students were broken into groups for discussion with a veteran who had served in Vietnam or Korea and one who had served more recently. As the children asked questions, Shelly says her partner, a Vietnam veteran, who deferred to her several times in the discussion, impressed her by his openness to and obvious respect for a female soldier.

She also says it’s important to have people to talk to who have been through the service and can understand what it’s like. “I learned from the people who went before me and passed along what I learned to the group behind us,” she says.

“I’m glad to be here, alive and kicking. That’s what most of us feel, we’re glad to be alive. Maybe not with all of our limbs, but alive and that’s something to be happy about,” she says.

The Lashe Spot has three Chicago locations, in addition to the Hinsdale salon located at 6 W. Hinsdale Avenue. For more information, call 630-908-7591, or visit lashespotchicago.com.