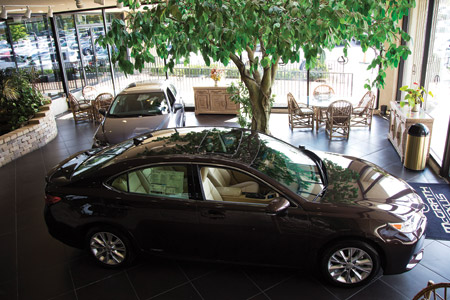 From the paperwork to the long waits, it’s not typically considered the most enjoyable experience. McGrath Lexus of Westmont, however, is working to change that perception. “Lexus really came up with the idea to pamper each person like they’re a guest in our own homes,” McGrath Lexus General Manager Tracy Isselhardt says. “That’s our whole philosophy.”

After an extensive remodel several years ago, the McGrath Lexus of Westmont facility is nothing short of impressive. With dark wood and private paintings, the showroom feels more like a five-star hotel than a car dealership. “We wanted it to seem like you’re walking into a Ritz Carlton or a Four Seasons,” Tracy says. “Most people don’t like to come to a car dealership, so we try to make it as comfortable as possible.”

The dealership also has an array of services and amenities to make customers feel at home. The facility include two koi ponds, a supervised children’s play area, quiet rooms with free internet access, and the Lux Café–which serves a variety of coffee, breakfast pastries, and Panini sandwiches. Customers can also enjoy free car washes any day of the week, along with complementary neck massages on Mondays and complementary shoe shines on Fridays. With all of these comforts, people tend to stick around for a while. “It’s not uncommon to see the same customer here two or three different times on a Saturday,” Tracy says.

McGrath Lexus’ service area is also highly organized–to help customers get their cars in and out as quickly as possible. The service reception area has four lanes, each with a television screen. When a customer drives up, the identification tag (provided for all cars purchased there) is scanned, and the customer’s service representative is notified that one of their customers has arrived. The television screen also lights up with a welcome message, as well as a photo of that customer’s service associate. It’s just one of the many services that makes the maintenance process smooth and hassle-free.

The staff at McGrath Lexus is also committed to making the car buying and maintenance process easy and comfortable for all clients, including female customers. “We have four female sales associates, a female service advisor, and several female greeters,” Tracy says. With its diverse team, the dealership is better able to meet its goal of making each customer feel at ease.

Yet, equally important to exceptional service is a superior product, according to Tracy. McGrath Lexus has 10 Lexus models, both new and pre-owned. “Our bread and butter car that everyone loves and that’s a good starter Lexus is our RX Crossover; it’s one of our best sellers,” Tracy says. “It sits up a little higher and is considered and SUV but it drives a lot like a car.” Lexus is also known for innovative technology, especially in its newest models. The 2014 IS has live Doppler radar and a navigation system that predicts traffic patterns along the driver’s route. For parents with teenage drivers, the 2014 IS can also be programmed to alert a parent via text message if the driver goes above a certain speed limit or drives out of a designated area.

With its high-quality vehicles and superior service, it’s no wonder that the McGrath Lexus dealership has many loyal customers. “Nationally, once you own a Lexus, we have the biggest chance of keeping you in a Lexus than any other automaker, and that’s because of the services that Lexus dealers provide,” Tracy says. In fact, the dedicated team at McGrath Lexus is continually looking for ways to make each customer’s experience the best that it can be. “There are a lot of nice cars out there, but there aren’t a lot of nice dealers,” Tracy says. “We try to be the difference.”

McGrath Lexus of Westmont is located at 500 E. Ogden Avenue in Westmont. For more information, call 630-323-5600, or visit mcgrathlex.com.