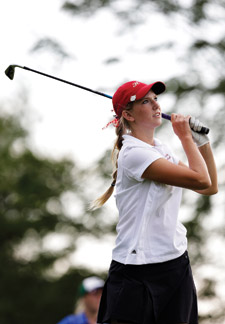 Madelynn Swank was a second-grader when her father, Tom, took her to her first Ladies Professional Golf Association Tournament.

Now a senior golfer at Hinsdale Central High School, Madelynn found herself surrounded by pros wearing pink back then, notably Paula Creamer—nicknamed “The Pink Panther” because of her fondness for pink togs.

Madelynn got Creamer’s autograph, turning a grand day into an unforgettable one. “Pink is my favorite color, the best color ever,” the 5-foot-10 Swank says. “It’s a fun color. Everything is better when it’s pink.”

But the best color in golf, when it comes to scoring, is red. A red number is a below-par score, and it’s what she and her Red Devil teammates will shoot for as they aim to improve upon Hinsdale Central’s fourth-place finish as last year’s Class 2A state tournament in Decatur.

“Madelynn’s length [off the tee] is great; she bombs it,” first-year Red Devils Coach Nick Latorre says. “She’s a great ball striker, and she’s solid around the greens. “Madelynn loves the sport, loves the competition.”

Swank put together an impressive string of showings at Mid-American Junior Golf Tour events this past summer, earning three consecutive runner-up finishes between July 10 and August 9. She went 78-78 at Plum Tree National Golf Club in Harvard, IL, finishing four shots behind the champion.

College coaches witnessed the action during the second round. “One of the most stressful rounds of golf I’ve ever played, mostly because I knew [the coaches] were watching me,” admits Madelynn, who kept her nerves in check nearly three months ago while shooting a round of 74 at the Jack Nicklaus-designed Ohio State University Golf Club.

Nothing rattles her on links these days, as long as she’s around talented, driven Red Devils whom she lauds for pushing her to greater heights in golf—and lower scores.“My teammates have inspired and motivated me,” she says.

Around golf courses, Madelynn knows when to tamp down her fun-loving ways and assume her serious side. “Her putting is consistent, and she hits her drives far, so far,” freshman teammate Jessica Lee says. “She hits it yards and yards ahead of my shots.”

During her sophomore year, Swank was hit with the realization that golf could be one of her outlets, despite the sport’s numerous mental and physical challenges. She liked golf after her encounter with Creamer. She started to love it at the age of 16.

“I thought, ‘Hey, maybe I have potential, maybe I can be a decent golfer,” Madelynn says.

She has spent considerable time working on her putting since then, completing drill after drill on what is, for many, golf’s make-or-break aspect. Her favorite short-game practice sessions are those that require her to read uphill putts.

“I get to hit those harder,” she says.

Coach Latorre is thankful he gets to watch Madelynn battle courses and lead Red Devils in a variety of ways for about three more weeks. The plan is to end the season again in Decatur on October 19, after securing a fifth consecutive state term berth. Such a destination would leave more than a few people tickled pink, one in particular.

“Madelynn leads either by example or by rallying the troops,” Coach Latorre says. “She’s definitely a team-first teammate, a player who knows the value of being part of good team chemistry. She’s very positive and she’s in a good mood every day.”