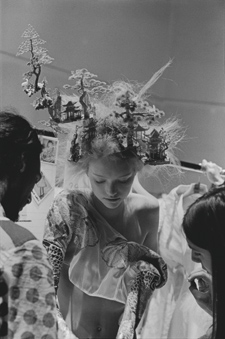 The Costume Institute of the Metropolitan Museum of Art is a national treasure, and a summer trip to New York to see the latest blockbuster exhibit has become de rigueur.

These days there is often fashion to be found in smaller cities, where curators lovingly tell the story of a single designer or plan extraordinary shows around a theme.

The André Leon Talley-curated Little Black Dress exhibit at the Savannah College of Art and Design Museum of Art was such a blockbuster that it shipped across the Atlantic to Paris after closing in South Carolina.

Whether as an artful addition to a business trip or the centerpiece of an unexpected weekend getaway, any one of these exquisite exhibits is sure to be an enjoyable experience.

Bulgari, the regal Roman jewelry house founded in 1884, has become synonymous with innovation and luxury in jewelry design.

This exhibition focuses on the decades of the 1950s through the 1980s. There is a focus on the period after World War II when Bulgari began to create a unique style inspired by Greco-Roman Classicism, the Italian Renaissance, and the 19th century Roman school of goldsmiths.

The hallmarks of the house are all here, including combinations of semi-precious stones and diamonds as well as gold coins mounted in gold and unusual color combinations.

The Art of Bulgari: La Dolce Vita & Beyond, 1950–1990 presents approximately 150 showstopping pieces from this era, along with sketches and other materials from the Bulgari archives. The exhibition takes a decade-by-decade look at Bulgari’s innovations in jewelry design with a particular focus on important American clients and on several striking pieces from the Elizabeth Taylor collection. deyoung.famsf.org

Yahoo CEO Marissa Mayer is a regular at the de Young’s opening night parties. Get in the proper tech mogul spirit by staying at the Four Seasons San Francisco (757 Market Street), where Mayer maintains her city residence. The hotel is also blissfully close to the jewelry stores of Union Square and Maiden Lane. Should the exhibit so move you, the Bulgari Boutique is at 200 Stockton Street.

A Queen Within: Adorned Archetypes, Fashion, and Chess

This more conceptual exhibit explores a dichotomy that exists in chess. The queen is considered one of the most powerful but also most unpredictable figures in the game of chess. The focus is on storytelling and how the archetype of the queen continually captures the imagination of fashion designers.

Rare pieces from a large private collection of Alexander McQueen will be on display, including a dress emblazoned with an image of muse Isabella Blow. Memorable works from Gianfranco Ferrè, Gucci, Viktor & Rolf, and more will also delight any fan of runway shows or fashion history.

McQueen, which highlight McQueen’s working process and fashion shows, will be on view. worldchesshof.org/a-queen-within

The Chase Park Plaza Hotel, located a quick walk away from the Hall of Fame, has a storied history of hosting every president from the 1920s through the 1990s. Legendary performers including Frank Sinatra, Sammy Davis Jr., and Dean Martin graced the stage of The Chase Club—now home to a five-screen cinema. Following a massive renovation, the hotel now seamlessly blends the grandeur of the past with a fresh, modern take on style. (212-232 Kingshighway Boulevard)

A first for a presidential library, this retrospective of the Dominican designer’s 50 years in fashion features 30 of Oscar de la Renta’s dresses and insights into his life and influences. There are inaugural dresses worn by Hillary Clinton and Laura Bush, red carpet looks from Jessica Chastain and Sarah Jessica Parker, and even the recent Great Gatsby-inspired dress that Carey Mulligan modeled on the cover of Vogue’s May issue.

The joy in this exhibit is the opportunity to examine the intricate work that goes into these very special dresses, to see the continuity in de la Renta’s work, and to glimpse firsthand the joyful spirit which fashion’s gentleman brings to his work. clintonlibrary.gov

While Little Rock is a little short on five-star sleeps, we love the ultra-glamorous duplex suites, including the over-the-top Governor’s Suite at the DoubleTree Downtown (424 W. Markham Street). All rooms are spacious, and the hotel has a welcoming vibe and amenities that includes chocolate chip cookies—and a well-equipped Fitness Center.