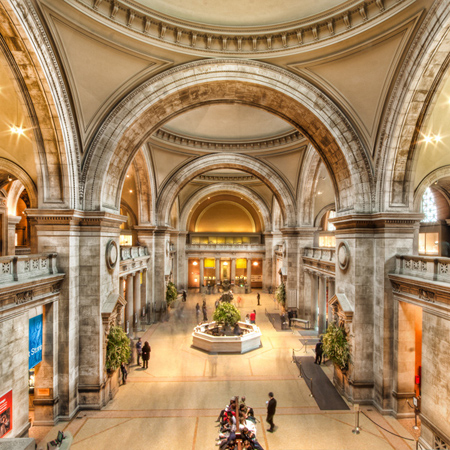 People are always falling in love in New York—both on the big screen and in real life. Maybe that’s because the city itself provides the perfect backdrop for romance. Speaking of, The Carlton Hotel, 88 W. Madison Avenue in Midtown, is a good place to start. Opened in 1904 as The Seville Hotel, the elegant Beaux-Arts style boutique hotel—with its breathtaking two-story lobby—offers a storied past (Frank Sinatra was a frequent guest, and Harpo Marx was once a bellhop), Hollywood glamour (the hotel has served as a location for such shows as The Good Wife and Curb Your Enthusiasm), and well-appointed rooms that are surprisingly and thankfully large by New York standards. The Carlton also offers a 24-hour fitness center, several chic bars/salons, an award-winning seafood brasserie (Millesime), and Anthony Bourdain’s Les Halles restaurant right around the corner.

Start out the weekend right, with coffee, pastries, and an “I Love You” bauble from Tiffany & Co., 727 Fifth Avenue. Holly Golightly may have had to window shop in Breakfast at Tiffany’s, but you don’t.

Even the most cynical New Yorker has a soft spot for Central Park, a magical urban oasis that houses everything from carousels to carriages, theaters to zoos. While a carriage ride is a must for any romantic NYC weekend, perhaps one of the most romantic spots in the park is Wollman Rink, where Ali MacGraw skated with Ryan O’Neal in Love Story and John Cusack skated with Kate Beckinsale in Serendipity. The rink, located between East 62nd and 63rd Streets, opens October 1, just in time for sweater weather.

There’s hardly a more beautiful place for lunch in NYC than the Boathouse Café (Central Park at 72nd Street) overlooking Central Park Lake, where Meg Ryan dished about romance in When Harry Met Sally. Afterwards, work off the calories together on a paddleboat, available for rent at Central Park Lake’sLoeb Boathouse (74th Street and East Drive).

Woody Allen made his love sonnet to the city, Manhattan, more than 30 years ago; today, he’s still spreading the love with his weekly Monday night jazz band performances at the über-sophisticated Café Carlyle on the tony Upper East Side (35 E. 76th Street). If you’re able to extend your stay through Monday (the only night the band plays), the two of you might be able to enjoy what is perhaps the quintessential New York experience.

What better way to cap off your romantic weekend in NYC than with a visit to the top of the Empire State Building (350 Fifth Avenue), the scene of the climactic ending in both An Affair to Remember and Sleepless in Seattle. It’s just a few short blocks away from the Carlton and, more importantly, “the nearest thing we have to heaven in New York.” —KK

While there is no better accessory for a NYC shopping getaway than your best girlfriends, a close second would have to be staying at the Waldorf Astoria Hotel (301 Park Avenue). The New York City landmark, conveniently located within walking distance to great shopping and dining, is a hallmark of glamour and elegance (and the perfect respite for a few weary shoppers). This historic hotel boasts upscale amenities, luxurious furnishings, expansive marble bathrooms, generous floor plans—and that’s just the hotel room. The property possesses authentic Art Deco motifs, four exclusive restaurants, and lounge options along with the renowned Waldorf Astoria service.

Start the weekend off on the right foot by spending the evening at Lincoln Center (10 Lincoln Center Plaza), the filming location for Darren Aronosfky’s elegant thriller Black Swan and home of the New York City Ballet, which opens its fall season with six performances of Peter Martins’ full-length production of the classically stunning “Swan Lake” (September 17 through October 13).

You cannot have a girls’ weekend in New York without mentioning Sex and the City. The iconic HBO show (and, okay, movies) have inspired many a girls vacation in the Big City—and rightfully so! Carrie and her gang offer great inspiration for a glam weekend. Start the day off with a jaunt down Fifth Avenue. Conveniently located two blocks west of The Waldorf, the fabled Fifth Avenue is a mecca for all things merchandise, and it only makes sense to start out atSaks Fifth Avenue (611 Fifth Avenue). This isn’t your average Saks; the store boasts 10 floors and a shoe department so massive, it rivals Ms. Bradshaw’s collection.

Give your wallet a break, and head over to The Metropolitan Museum of Art (1000 Fifth Avenue), whose famous steps have been seen in countless episodes of Gossip Girl. But, unlike the girls, don’t just spend your time on the steps of the famed museum. This September, The Met unveils a fascinating exhibition, “Interwoven Globe: The Worldwide Textile Trade” (September 16 through January 5), which explores the intricate designs and luxurious fabrics from all over the world, some dating back as far as the 16th century.

Head to Lower Manhattan’s mecca for all things designer at the NYC legend, Century 21 Department Store (22 Cortlandt Street), and pull a Rebecca Bloomwood from Confessions of a Shopaholic. But, unlike the movie heroine, this shopping trip won’t break the bank. Century 21 is known for its deep designer discount and splurge-less steals. The store has a chic following of fashionistas who know that 65 percent off is always in style. And, if you and your crew are in need of a little refreshment after an intense bout of power shopping, head three blocks over to Financier Patisserie (35 Cedar Street) for the power shopper’s power lunch of a freshly baked croissant sandwich.

After shopping until you drop, commandeer the nearest taxi back to The Waldorf to indulge in an afternoon of pampering at the hotel’s Guerlain Spa. With tailor-made treatments, including facials, body treatments, and soothing massages, you’ll feel recharged and ready to conquer the streets of New York once again. End the evening on a quiet note with the aptly named Waldorf Salad from the hotel’s 24-hour Room Service menu.

After a relaxing evening, grab a cappuccino to-go on the West Side at Café Grumpy (224 W 20th Street) and escape the city feel with a stroll through New York’s famous High Line (Gansevoort Street, between 10th and 11th Avenue), a public park built on Manhattan’s old elevated freight train line. While the High Line is a little different than when it appeared in the classic film Working Girl, it is a fresh and inspiring take on an urban environment, and the perfect farewell to an exciting weekend in the Big Apple. —KM

Coming to NYC This Fall:

This 10th annual celebration of dance features five different exciting programs, including two free evenings of dance at the Delacorte Theater in Central Park, September 16 and 17, with performances by the New York City Ballet, Paul Taylor Dance Company, and more.

Get a jump on the office Oscar pool this year and take in some of the best cinema of the year, as well as a number of panel discussions, at the Film Society of Lincoln Center’s New York Film Festival.

If you’re tired of the candy fest that Halloween has become, how about a parade to feast the eyes instead? This thrillingly theatrical event, which takes place on Sixth Avenue in Greenwich Village, features giant puppets and over-the-top, eye-popping costumes. —KK