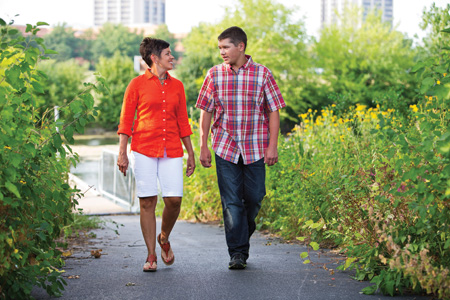 The Gold Coast Fashion Award Show is a signature event of the Children’s Service Board, one of the most successful affiliates of Ann & Robert H. Lurie Children’s Hospital. It’s a high-spirited affair that attracts more than 1,300 dynamic people in their early fall best. Runway Glamour Sponsors are Server Farm Realty and Digital Realty, and Gold Coast Style Sponsors are The Africa Channel, Beacon Capital, and Hearn and Turner. Along with individuals, these corporate sponsors ensure the prosperity of the show, which raises over $400,000 for the Division of Pediatric Surgery.

This show offers guests a unique way to see the fall collections from both Chicago’s top retailers and a group of emerging designers who compete in the opening segment of the show for the audience vote.

It is Gustavo Cadile’s designs that Children’s Service Board Treasurer Janette Acton cites as her favorite of all the collections in all of the years she has supported the show, including a two-year stint as chair. 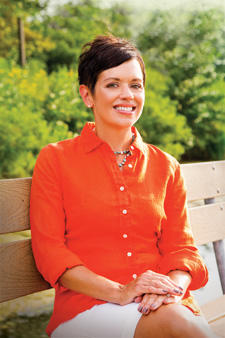 Janette says she explored different volunteer opportunities with the hospital, which was still called Children’s Memorial Hospital (CMH) six or seven years ago, and has found the experience very rewarding, especially volunteering at the hospital and spending time with the young patients and their families.

So, in the in the spring of 2010, when her son Garrett was hit in the head with a baseball while pitching a tournament at Benedictine University, she had two thoughts when told he was being transferred to CMH. First was, “Thank God they’re calling Children’s.” This was followed closely by, “This must be really bad.”

Garrett was transferred from Edward Hospital in Naperville, where the doctors had assured him and his father that he would soon be joining a large group for his birthday dinner at Benihana, to the Lincoln Park campus of CMH by ambulance. It was a difficult trip, as he was strapped to a board and unable to take pain medicine because it was a head injury.

“When the ambulance doors opened, everyone was there. Children’s had assembled the best of the best, and they were able to operate right away,” says Janette. Garrett’s skull was fractured in four places, and he would have died in the night from bleeding had everyone not acted so quickly to get him to the team of experts at CMH.

Once out of surgery, Garrett wanted nothing more than to return to the Benedictine baseball tournament. He made it back to a standing ovation, but not before Coach Joel Quenneville stopped by the hospital with the 2010 Stanley Cup.

These days, the young pitcher loves playing more than ever and has participated in several invitation-only showcase events at Midwestern colleges. He volunteered for setup at last year’s Gold Coast Fashion Award Show and also spoke to the crowd. Known for being a boisterous group, we asked if he found the room loud while speaking. “They were totally quiet when I was talking,” says Garrett.

Proud mom Janette says he did a great job telling the attendees about his treatment and time at the hospital.

Since the new facility opened in Streeterville as the Ann & Robert H. Lurie Children’s Hospital of Chicago, the facilities are larger and more modern, but the spirit of everyone who works, volunteers, or is treated there remains as remarkable as ever.

The Gold Coast Fashion Award Show directly supports the Division of Pediatric Surgery, helping kids like Garrett get the treatment they need.

Janette says that her son’s time in the hospital, though brief, gave her family much insight into what other families experience and has made her volunteer work with the Children’s Service Board even more meaningful. “You realize what so many people are going through every day,” she says.

Janette would love to see more women from our area become involved with the Children’s Service Board, which currently has more women from Chicago and the North Shore and significantly fewer from the western suburbs.

She advises anyone who might be interested to join the group for this event. “It’s a really fun event. We start with a cocktail party, followed by lunch and the show.”

Interspersed with the fun and fashion, guests hear amazing stories like Garrett’s. It’s the perfect mix of fashion and philanthropy.

Working in the area gives Janette Acton unique insight into spots to host a client lunch or grab something quick and nourishing. Her recommendations include:

Fresh, yummy food that evolves with the calendar, always with delightfully right portions that allow diners to get some work done in the afternoon. 3 Oakbrook Center, 630-571-4752

The Gold Coast Fashion Award Show is Friday, September 27 at the Hilton Chicago, 720 S. Michigan Avenue. For information or to purchase tickets, visit gcfas.com. To purchase tickets or learn more about volunteer opportunities with the Children’s Service Board, call Lauren Pedi at 312-227-7306. To learn more about the Ann & Robert H. Lurie Children’s Hospital of Chicago, visit luriechildrens.org.