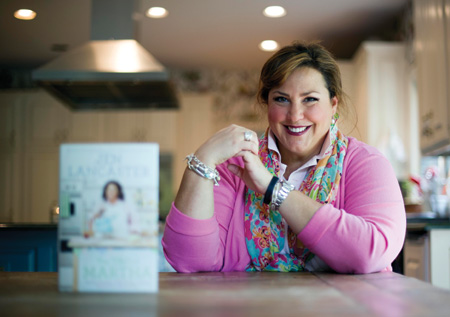 Lake Forest resident and bestselling author Jen Lancaster upped the lifestyle factor of everyone’s summer reading list this year with the release of her newest memoir, The Tao of Martha: My Year of LIVING, or Why I’m Never Getting All That Glitter Off of the Dog. By immersing herself in Martha Stewart’s teachings, Jen embarked on a yearlong quest to take herself, her house, her husband (and even her pets) to the next level—from closet organization to craft making, from party planning to kitchen prep. She gives readers a front seat to the successes and the lessons learned. Over coffee, Jen enthusiastically reflected on whether living as Martha Stewart was a good thing after all.

Hinsdale Living: At the risk of being presumptuous, Martha Stewart doesn’t seem to be someone you’d naturally gravitate to. Are we right?

Jen Lancaster: While I’m very organized when it comes to business, I’m not at all organized in my personal 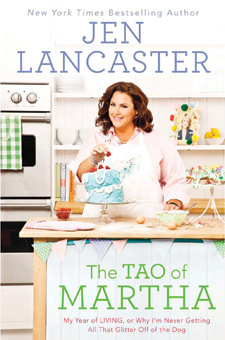 life. When we moved, we unpacked things where the boxes landed. The kitchen has been a disaster for two years. It looked fine, but if you opened any drawer or cabinet, it would be the most random assortment of things that I had swept off the counter to clean it.

At the end of 2011, I was so frustrated with everything. I just wanted it to be over, to even skip Christmas. But my husband said, “We’re going to give 2011 the bird by having the biggest Christmas ever.” So we went crazy. We hired landscapers to decorate the outside trees. I was going to make this fabulous Italian dinner. I have a Bolognese sauce that I love. But to make it, I have to use the actual, physical hard copy of the recipe, with the notes in the margin. Everything hinged on this recipe, and, of course, I couldn’t find it. After three-and-a-half hours, I found it—in the gun cabinet, in our kitchen. We didn’t put the gun cabinet in our kitchen. The house came with it. Anyway, after I found the recipe, my husband said, “I bet Martha Stewart doesn’t keep her important documents in the gun cabinet.”

Martha Stewart has always been who we compare ourselves to when we do something wrong. So with 2011 behind us, my husband and I decided to do whatever it took to make 2012 our best year yet. My husband’s plan was to grow a beard. I decided I was going to take on a yearlong happiness project. What if I spent a year of my life living by Martha Stewart’s dictates?

What did you learn about Martha Stewart?

About three or four months into the project, I realized that there is a lot more to Martha Stewart—there’s a whole Zen to the way she does things. Everything she does, she does for a reason. For example, if you see her do a show on canning, she’s not going to do it in March. She’s going to do it in the fall when those fruits and vegetables are ready to be canned. There is a purpose. There’s no wasted time, no wasted steps.

Was there anything about Martha’s way of doing things that you didn’t like?

I was prepping for a Fourth of July party, and her instructions were, “Take a dip in the pool.” What I actually did was go to Costco four times that day. I was so angry that she was a level of organized that she could actually relax before having people over.

What is your biggest takeaway from this experience?

Don’t be afraid to try. I didn’t know I could be successful at this. And, I learned to stop taking shortcuts. I now take that extra step. It might require a little more effort, but it’s worth it. I also now know how to be in the moment and enjoy it.

The Tao of Martha is available at Barbara’s Bookstore in Burr Ridge. For more information about Jen Lancaster and her other books, visit jennsylvania.com.