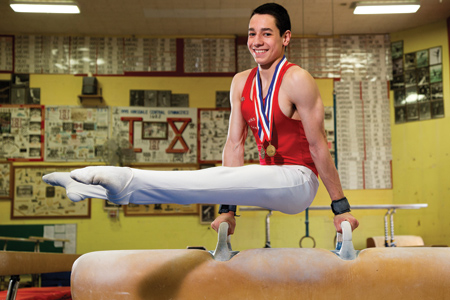 “I didn’t break anything,” Brian recalls. “But the floor usually ended up a little chalky.”

Which meant he usually had to grip the end of a running vacuum cleaner after gripping the apparatus during all those in-house workouts.

His talent and strength secured the prizes.

The 5-foot-7, 130-pound Red Devil—a first year prep gymnast, after tirelessly developing his craft for more than 10 years as an elite gymnast at Premier Gymnastics Academy in Downers Grove—finished first on the pommel horse (9.55) and high bar (9.55) events and captured state runner-up honors in the all-around (55.95).

“Brian is so smooth, so stretched out when he’s on the pommel horse,” Hinsdale Central Gymnastics Coach Mark Wanner says. “When he competes, he makes everything look so effortless. That comes from putting in the time, and time commitment is what the sport of gymnastics is all about.”

Thompson didn’t opt to come out for Hinsdale Central’s gymnastics team until a week into the season. Indecisiveness had contributed to the delay.

“I’m glad I got to compete for my school,” Brian says. “It was awesome representing Hinsdale Central. During the season, I learned how to handle pressure…pressure I didn’t feel while competing at the club level.”

He certainly handled it well at the state meet, pacing the Red Devils’ sixth-place (149.65 points) showing. Brian became the fifth Hinsdale Central gymnast in program history to top the state pommel horse field and the first since Jeff Means bowed for the event’s gold medal in ’94.

A specialist usually wins the event, not an all-arounder like Brian.

“That’s what made that pretty cool,” Mark says.

Only one other Red Devil [Scott Haglund, in ’88] had captured state gold on the high bar before Brian beat the runner-up [Downers Grove North senior John Schubert] by a tenth of a point in the event last month.

“The addition of Brian to our program was seamless; he fit in right away,” Mark says. “The entire team was excited when he joined us. He brought with him an impressive skill level and work ethic to the gym. Others noticed, and they all benefited.”

Brian wasn’t working out or performing when he experienced one of his season’s many highlights.

“I was in a set of bleachers, with my teammates, when we found out we had won conference [West Suburban Silver],” he recalls. “That was an awesome feeling, being a part of a championship team.”

Well before Brian began helicoptering around his mini pommel horse under his roof at home, he was honing his routines under the tutelage of Premier coach and Ukraine native Andriy Stepanchenko, now an United States Olympic Training Center coach.

“He taught me so much, from technique to style,” Brian says. “He also stressed that you can’t cheat yourself on the way to properly performing and executing routines. It takes consistent hard work, lots of repetition.”

Brian intends to focus primarily on bytes and algorithms, rather than on pommel flairs and double-leg circles, as a computer science major at the University of Illinois.

“I took a computer class my junior year and enjoyed it,” he says. “There’s logic to it, and I’ve always liked math.”

But Brian hasn’t subtracted himself completely from the sport of gymnastics—and applying chalk to his hands. Illinois fields a club gymnastics team called Flipping Illini.

Brian will flip. And soar. And land cleanly.

It will likely all add up to more success for a living [room] legend.