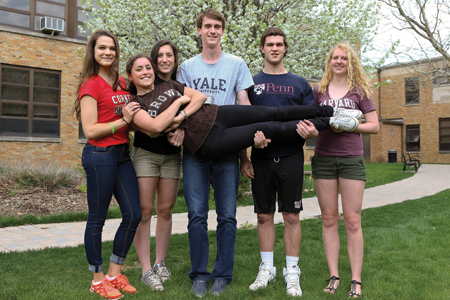 One sure-fire method of résumé padding for life is to get accepted to an Ivy League school, but with most of them accepting fewer than 10 percent of applicants, how does one achieve this difficult task? We rounded up six graduating seniors from Hinsdale Central, each attending a different Ivy League school in the fall, to ask them what set them apart from the rest of the pack and what helped them decide where they’ll be spending the next four years.

It’s great for the subject I’m looking to go into—political science. Also, it gave me the opportunity to play tennis, which was something I was looking for the opportunity to do. I wasn’t recruited. I got into Yale on my own power and then I talked to the coach about playing. Also, the campus and people. The people seemed really intelligent and ambitious.

I did it on some public service and volunteering I did that helps poor Hispanic children on the West Side of Chicago. It gives them a safe place to play sports, away from gangs. I started a middle school basketball league there, and I’ve been doing that for two years.

I think [volunteer work] was a big part of it. I think that definitely helped me stand out. I’d also worked for Congressman Bill Foster over the summer, going door-to-door and cold calling for him. I wrote another essay on that.

It’s a great school for academics, which is important to me. I want to go into biomedical engineering, and there are great opportunities for research at Harvard. I also like the area. Boston’s a fun place. We visited last year. I liked the atmosphere, and the students seemed nice and welcoming.

I wrote about my grandpa and how I admire that he follows whatever he wants to do and isn’t afraid of other people’s opinions. It’s about confidence.

I play violin. Maybe they wanted a violinist for the orchestra. In my application, I mentioned I might like to join an orchestra. I’ve been playing since I was 4.

Lots of reasons. I play golf, so I was recruited. Brown was my first choice though, so I’m really lucky how that worked out. I really like the atmosphere of the school. They don’t have requirements, so I can take what I want. It’ll be really nice because I’m interested in a lot of different things. So I can take an art class if I want. I never got to do that in high school because of all the AP stuff.

Weight lifting. I love to work out and golf is a weird sport because you don’t really need to be that strong, you just need to be flexible. But I love lifting weights. I wrote my essay about a day in the life of weight training and how weird it is that girls do it, but how necessary it is for a lot of things in life.

I think I’m well-rounded. I obviously have good grades and good test scores, but I play guitar, piano, ukulele, and I sing. So I wrote a few essays on gigs and how I’ve learned a lot through music. Obviously, I play sports. I just have a lot of different hobbies.

I’m going there for football, so I just really liked the combination of academics and their competitiveness within the Ivy League. That, along with the urban campus. I was looking for a more urban experience.

I wrote one on Ben Franklin, because he founded the school.

The combination of academics and athletics. Also, being proactive by reaching out to coaches and finding my options. I reached out to them. I sent them tape and made phone calls and started the relationship. They started coming out my junior year. I went out there for a camp last summer, and that’s where they offered me the chance, and August of my senior year is when I committed.

I’ve always wanted to go to an Ivy League school, because it’s the best education. I play hockey and soccer, so I was lucky for that to help me have a chance at an Ivy league school. I chose Princeton because I love the coaches there and the whole atmosphere. You get a great education, but a well-rounded student body. Everything at Princeton made me feel at home. Everyone I talked to had different reasons for why they liked it there.

I wrote about going to Morocco with my family. It was not what I expected. I learned how lucky I am and how, hopefully, when I graduate with a Princeton degree, I can go to another country and help.

I think it has to do with being well-rounded because of grades and extracurriculars and everything. Being smart is one thing, but I think you’ve got to have a hook. Sports were my hook.

I was accepted into their pre-vet program. My dream has always been to be a veterinarian. It was a really big honor to get into that program, and it’ll allow me to study equine medicine. I’ve been riding for 12 years. Right now I’m in jumping, but I’ve ridden every other type of discipline, too.

I wrote about a project that I did in the National Art Honor Society, which I’m president of. We did 12 hours of painting, which started at 6 p.m. and ended at 6 a.m. We got sponsors for every hour that we painted, and all the money that we raised, we made art packages for the kids at Children’s Memorial. So that was one of my essays.

That I already knew what I wanted to do. Cornell has 11 schools that are very specific. I was very set on wanting to be a vet, so that’s what I really expressed. I think schools are into the kids that really know what they want to do. Also, the things that I’ve done. I’ve really tried to build my résumé. I’m an athlete, president of a couple clubs, I’ve tried to do as much as I can to get involved.