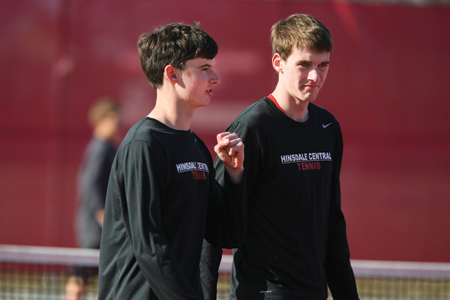 Minutes after another tennis victory last month, Hinsdale Central senior doubles partners Alex Hagermoser and Peter Heneghan sit next to each other in a lobby area at Deerfield High School.

A table, not a net, stands between the pair of captains and an inquisitive scribbler. It’s Canadian doubles—without rackets and tennis balls.

The sport of basketball arises as a topic of conversation because Hagermoser is 6’6″ and Heneghan is 6’3″. “Peter is better than I am,” Alex admits. “And I can’t dunk a basketball. I can’t even dunk a tennis ball. I have zero hops.”

But he owns one Illinois High School Association state doubles championship, a feat he and Peter produced as juniors for the Red Devils last spring. It paced Hinsdale Central’s 21st boys tennis state title and launched more than a few jumps for joy. The duo aims to capture another state doubles title later this month and match what former Red Devils Dan Ballantine and Ian Tesmond accomplished in 2009–10.

They’re different in many ways, which is a good thing in doubles. Alex, a big server with a frighteningly effective net game, is the calm and steady one; Peter, a master blaster as a service returner, is the animated and passionate one. Together, they never panic on the court and always set each other up for resounding winners. 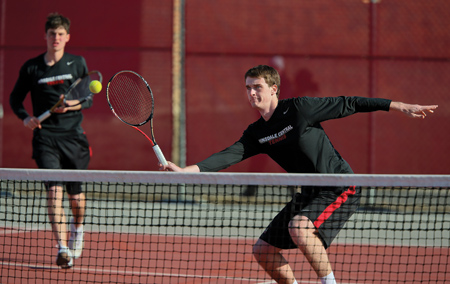 “I need Alex as a doubles partner,” the gregarious Peter insists. “He’s quieter, a guy with a demeanor that calms me down. You don’t want two of me on the same side of the net, because that would be too much of a roller coaster.”

It wasn’t much of a contest when they first played against each other in a singles match as grade-schoolers. Alex won 6-0, 6-1. In the rematch a few weeks later, they split 6-0 sets before Peter edged his future teammate 10-7 in a super tiebreaker.

“We didn’t like each other at first,” Peter recalls. “But that changed in high school. We’re close and we like to joke around, even on the court at times. We play around 30 matches in a season, and there’s a lot of dead time out there between points. You have to have a good time out there, and we do.”
After starting their varsity doubles career with a 7-6, 7-6 win at No. 4 as freshmen (in a dual meet with Deerfield), they reached the doubles quarterfinals at state as sophomores. Hagermoser/Heneghan entered last year’s state meet as a third-fourth seed and knocked off top-seeded Michael Levin/Michael Sellitto of Glenbrook South 7-6, 7-6 in the final.

Hagermoser/Heneghan needed a 6-3 third set to down both a Boylan Catholic High School Rockford pair in the fourth round and an Edwardsville duo in a semifinal.

“They’re confident whenever they go into a third set; they’re never frazzled,” John says. “Alex and Peter are very cerebral and make adjustments on the fly. Doubles—it’s often a chess match, and they’re grandmasters.”

A son of a former Michigan prep state doubles champ (Herb), Yale-bound Alex doesn’t have to check where his mate is when an opponent lifts a lob. It’s his, all his, to smack. His excitable partner never minds getting out of the way to watch—and hear—the ensuing loud show. “Alex is in charge of all overheads,” Notre Dame-bound Peter says.

Alex, the reticent one, uttered the last two words in a 6-0, 7-5 No. 1 doubles victory at Deerfield on April 3. Peter, on match point, had just scorched a backhand service return that barely cleared the net and ate up the approaching Warrior near the “T.”

There was no need to raise his voice and, therefore, no need for an exclamation point. Peter’s shot had been emphatic enough.