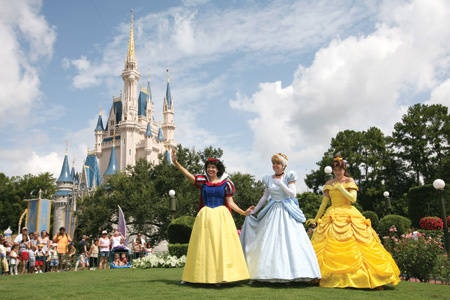 This spring, my husband and I decided it was finally time to book our first visit to Walt Disney World. With our oldest daughter turning 13 and our youngest son turning 5, we felt the children were finally at the perfect ages to make the pilgrimage to see Mickey Mouse.

To make your vacation its most magical, here are some tips we picked up along the way in planning and traveling to Disney.

Research. Research. Research. Because Disney is one of the most popular travel destinations in the world, there are countless online and print resources to help you make your plans. Two of our favorites were mousesavers.com and The Unofficial Guide to Walt Disney World 2013 by Bob Sehlinger and Len Testa. Additionally, we downloaded an app from touringplans.com that gave us up-to-date information on wait times for various rides and exhibits. Before we started each day, we entered the things we wanted to see and do, and it would produce the most efficient way for us to do so, including when it made sense to take advantage of the Disney “golden ticket”—the FASTPASS. (If you’re not familiar with the FASTPASS, it’s a Disney dream invention where you pick up a ticket to ride on a popular attraction later in the day. Instead of waiting in line, you pass all crowds and go right to the front.)

Focus. If you’re like us, your time in Walt Disney World will be short. Ask yourself if it’s necessary to see all of the parks on this visit, or if it might be better off spending time in just one or two. Because we drove to Florida and only had four days for touring, we opted to buy passes to only the Magic Kingdom and Epcot on this visit—two days in each park. Two days was the perfect amount of time for the Magic Kingdom and one day too many in Epcot. If we were to take this trip again, we may have added another park to our vacation (see sidebar), or broken up our park visits with some breaks by the pool. There’s very little downtime on a Disney trip, so an hour or two poolside will do wonders to recharge your batteries.

Stay on the Park’s Grounds. Given the little time you’ll be spending in your hotel room, the temptation will be to save money on your lodging and book yourself in a more remote location. However, the more you pay to stay on the Disney campus will save you hours in commuting time, especially if you reserve deluxe accommodations along the monorail or Disney boat line. Additionally, if you drive to Disney or rent a car, parking is generally free at the parks—putting you in control of your schedule, not the bus drivers.

Invest in a Meal Plan. As expensive as they are, meal plans end up being more economical than purchasing meals and snacks on your own within the parks. A nice perk of the meal plan is the souvenir mug each family member gets to fill up with free soft drinks, coffee, or juices.

Book a Dinner or Two with the Characters. While many of the Disney characters roam the park freely or have stations to sign autographs throughout the Magic Kingdom, the main five—Mickey Mouse, Minnie Mouse, Donald Duck, Goofy, and Pluto—are hard to find. Unless you make reservations at a meal where the characters are promised to attend, you may only see these Disney favorites at a distance on a parade float, or in a show outside of Cinderella’s Castle. If given the choice, pick a character dinner over breakfast. Better to get a jump on the crowds and be at the parks early.

Push Yourself (and the Kiddos, Too!). There is so much to see and do at all of the Disney Parks. While I tend to be a stickler about bedtimes, it’s worth it to bend the rules to see the amazing evening parades and fireworks displays hosted at the parks in the evening. It’s truly then when the parks are the most magical.

The Force is With Us 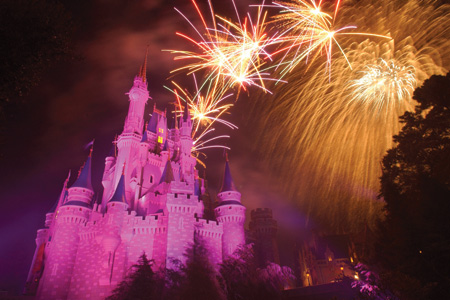 Late spring in Central Florida brings heat, humidity, and the opportunity to watch Chewbacca bust a move to “YMCA” in a dance-off competition. May 17–19, 24–26, May 31–June 2, and June 7–9, Disney’s Hollywood Studios is guarded by Stormtroopers and Mickey Mouse becomes a Jedi Knight.

For families with children who regularly practice their lightsaber technique, it is a super-exciting time to visit the park. Characters from the Star Wars Universe are on hand throughout the day for photos, and there are opportunities to meet and greet actors from the movies and the animated Clone Wars series.

The mid-day Legends of the Force Parade features a huge showing from the Florida Garrison of the 501st Legion. These costume enthusiasts deserve every cheer they receive, not only for their elaborate costumes, but also for wearing them in 96-degree heat under the noontime sun.

The evening hours bring the Hyperspace Hoopla, where the two sides of The Force face off in a dance competition.

Of course, special merchandise is created for the event and it’s fun to see how the creative minds behind the design merge the two worlds of beloved Disney characters and the science fiction world of the Star Wars galaxy. Do be prepared for a high geek quotient and don’t be surprised when one of said geeks goes slightly apoplectic when you open the box of a special-edition toy and actually allow your child to play with it.