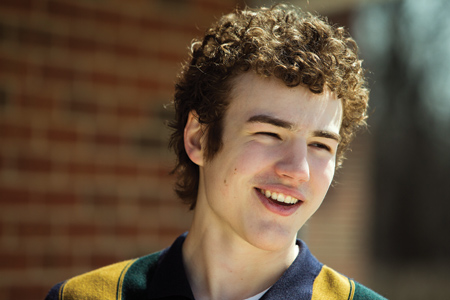 Regular folks get plucked from soda shoppes and community centers, then dropped into leading films roles for a brand-new life of fame, fortune, and accolades galore. The simple truth of making it as an actor has a lot less to do with being discovered than it does with creating your own opportunities. Hinsdale has been exporting quite a few talented young actors and singers to the bright lights of Hollywood lately. Many of them have appeared here in our pages. But most success stories are written as if the subject’s new big project is the first chapter. Most of the time, that’s overlooking a prelude that could be a novel all its own.

Parker Mack is a 16-year-old actor. Just lately he’s appeared on Chicago Fire opposite Jesse Spencer (House, M.D.) and Taylor Kinney (Zero Dark Thirty) as a young man involved in a car accident. Appearing on a primetime network TV show is a huge achievement, but Parker didn’t get the job by hanging out and waiting for opportunity to stumble across him. He’s been working at it for years. 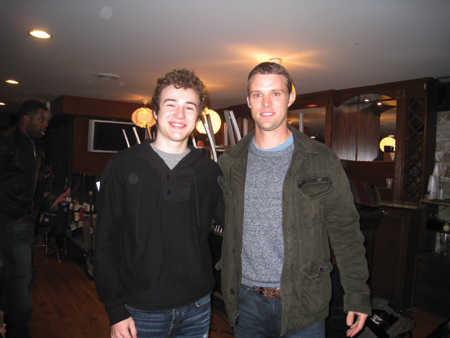 Parker has been represented by an agent since he was 6 years old and has been going to acting auditions for as long as he can remember. “I went to this agency that had a program for kids who wanted to start in the industry,” says Parker. “I went in for an interview, they liked my 6-year-old self, and that’s it. The first real thing I got was a commercial for this inflatable bounce around gym. I just jumped around in that bouncy thing all day.”

At this point, Parker has been on so many auditions that it’s just another part of his day. Any working actor will tell you that if you’re booking one out of every five things you audition for, you’re way ahead of the curve. “Now when I go, I work really hard on everything I’m given and I try my hardest, but I don’t think about it more than I need to, I just do it. I don’t think about the other people there or any of my competition. I just go in and do my audition, then I forget about it and move on to other stuff.”

Since most TV and films are shot out of California and Vancouver, the Chicago on-camera acting market is heavily weighted for commercials and student films. Parker has done a lot of commercial work. He’s acted in campaigns for companies like Bank of America, Froot Loops, Culver’s, and many others. But he’s also done his share of student films for schools like Columbia College, Tribeca Flashpoint Academy, and New York University.

“I like to meet a lot of the people that are on the set,” says Parker. “Everyone is really nice. On commercials, everything feels a little bit faster. On a short film, it’s mostly produced by college students, so it’s a little more lenient; everybody’s just having a good time. On the TV shows it feels extremely professional, so you’ll spend a lot of time on individual things—like hours at a time just to get that one scene perfect. So far, short films have been a lot of fun to work on. I think those are my favorite, because I like spending a lot of time with the people that I meet on set. On commercials you don’t really get to know everybody.”

Acting can also be a costly pursuit, between getting a great headshot and résumé together, volunteering your time to no-pay short films in order to build your reel, joining the unions, and working with acting coaches and classes to build your craft and establish vital relationships, it can start to add up. “He got his SAG card when he was 14,” says Kristen Klebenow, Parker’s mother. “We don’t even think about [the costs]. It’s investing in him. And he’s made more money than we’ve put in at this point. If you start worrying about the money, it just gets crazy.”

In such a competitive industry, surrounded by so much rejection, it’s easy to become discouraged. That’s why Parker’s take-it-as-it-comes temperament has him nicely positioned to put in the hours, days, and years of effort it takes to finally break through into the industry. It’s a bonus that he’s talented, but you can credit his determination with why we’re seeing him show up on our TV screens more and more often now.

For those looking for their own way into the industry, Parker has these words of wisdom: “My advice is to memorize a good monologue. When an agency doesn’t see much on your résumé, they don’t know what you can do. They’ll ask you to prepare a monologue, and if they like what they see, it’ll give you a good boost; maybe they’ll take you on. If you have a passion for acting, it doesn’t matter if someone out there has a similar look to you. If you have the passion to train and get work, you will get out there. Nothing will hold you back.”