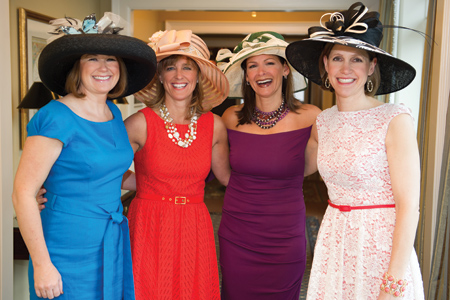 For 58 years, the Hinsdale Auxiliary of Children’s Home + Aid (CH+A) has brought some of the area’s most dedicated volunteers together to improve the lives of children, youth, and families. For 56 of those years, the Auxiliary’s Kentucky Derby Day Party was a daytime event that centered on watching the Kentucky Derby live.

Last year, the group decided that a post-race party would not only be a fun date night, but would be free of the inevitable springtime conflicts, like First Communion ceremonies and little league games. Though initially nervous about the switch, a member who is originally from Louisville assured them that the post parties are the most highly anticipated and well-attended soirees of the weekend.

The ladies don colorful dresses and will possibly indulge in this season’s equestrian-themed accessories. The gentlemen enjoy an opportunity to wear the seersucker and chino suits that otherwise only make an appearance at summer Southern weddings. “Everyone likes the theme. It’s fun to put on a bright spring dress and enjoy the nice weather that’s just arriving,” says Ann Bynan, one of the three event chairs.

Guests attending the 2013 party will enjoy a particularly lively program. Eric Ferguson, co-host of The Eric & Kathy Show on The MIX 101.9 and former Hinsdale Living cover man is serving as celebrity host. His wife, Jen Ferguson, is a new member of CH+A, and traditionally a member’s husband has volunteered to serve as host. Such is the power of this everyone-pitches-in group that this member’s husband has more than a little experience in the field of keeping conversation flowing and moving things along.

Eric will introduce Laurien Hessels-Schroeder, a glamorous auctioneer formerly of Christie’s Amsterdam office, who will lead bidders on an exhilarating bidding period that promises edge-of-your-seat excitement.

Because it’s unlikely that anyone will want to miss a minute of the live auction action, the silent auction, which will open online one week before the party, is going mobile, giving people the ability to bid from a smartphone.

“Another exciting speaker this year is an alum of Children’s Home + Aid. He was adopted through the program and is expected to speak on his experiences in the CH+A foster program,” says event co-chair Stephanie Silva.

The Hinsdale Auxiliary of Children’s Home + Aid is a deeply rooted organization of women making a difference in the lives of children through authentic gestures and efforts over time. “You know when you join that you’re going to be asked to do something significant, which instantly makes you feel like an integral part of the group,” says Auxiliary President Heather Hester.

The Auxiliary offers members many opportunities for field visits to CH+A facilities in Englewood, Evanston, and Schaumburg. They are able to spend time working on craft projects with the children, “which is amazing for us, because they’re so appreciative,” says Stephanie.

“We support one cause. It pulls at your heartstrings, but it also makes people very willing to give to CH+A. Whether they are making a monetary donation or giving an item for the auction, people understand that it is a gift for the children,” says member and former Auxiliary President Meg Berger.

Meg’s mother, Ethelmae Waters, will receive The Help, Hope, and Opportunity Award at the party. The award honors a member who embodies the mission of CH+A, which is to give children help, hope, and opportunity. “It’s a way to honor an associate member who has given so much of her time to the organization,” says Heather.

“She taught me good habits. I can remember friends and I parking cars for CH+A parties while I was growing up, so we understood that raising money and helping others is something that you do in life. You give back,” Meg says.

Ethelmae remains an active supporter of CH+A. “She always brings friends to the Derby Party and friends to the Sherry Party in December. Those friends are always happy to support her and her efforts—and they’re thrilled for her that she’s being honored by the organization to whom she’s given so much,” Meg says with a smile.

To Hat or Not to Hat

With the move from day to evening, many wonder if this is an occasion to don hats or if chapeaux should be left at home. CH+A operatives report that as with many style-related questions these days, there is a “Middleton Effect.” “There were more fascinators last year, people seemed to enjoy experimenting with them,” says co-chair Stephanie Silva.

Fascinators can easily be worn at night because they stay close to the head and attach to an updo or loose hair with a comb or headband.

If HRH The Duchess of Cambridge’s insouciant wearing of interesting headpieces is intriguing, this may be just the moment to try out a fascinator of one’s own.