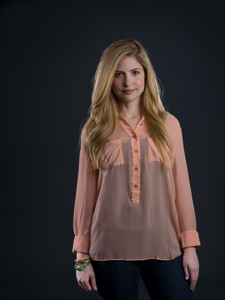 There are countless angles and paths that can be taken—people just need to find what they are good at and the type of music they are passionate about. Music can be a part of anyone’s life,” Jayne Jaeger says as we talk in a coffee shop in downtown Ann Arbor, Michigan. Jayne, a freshman at the University of Michigan’s School of Music, Theater & Dance and a Hinsdale Central High School graduate, has made her love and passion for music a huge part of her life. According to Jayne, this love stems from her supportive and musical family.

“We are a very artsy family,” she says with a huge smile on her face as she talks about them. “We are also really into going to see musicals, plays, dance performances, etc.—it is just how we are. My parents raised me to appreciate all the different styles of music and art.” Jayne and her parents are not the only members of her family who love music and art—all three of her younger sisters participate in the arts. In fact, all are dancers and the second oldest of the four girls is also a singer. “She is more of a pop singer than me, so she will probably try out for American Idol next year.”

While her sister may audition for the reality show, it was Jayne who auditioned when American Idol came to Chicago last summer. She decided to do it because she did not want to miss such an amazing opportunity. “I have always been a huge fan of the show and I always thought it would be fun to audition for it. I figured why not since auditions were only going to be held 30 minutes from my house.”

When Jayne arrived at the auditions, she was amazed not only at the sheer number of contestants, but also how talented everyone auditioning was. “I was really nervous and just plain scared,” Jayne recalls with a laugh. “I first auditioned for the producers of the show before I went to audition for the judges. I had to listen to the girls who auditioned before me—it was nerve-wracking. There were girls there who could belt like crazy, but they were getting cut.”

When her number was finally called, Jayne performed a version of The Beatles’ hit song “I Want to Hold Your Hand” from the film Across the Universe for the judges. “I think a lot of it has to do with the potential the producers see in your personality,” she says. Those producers must have seen 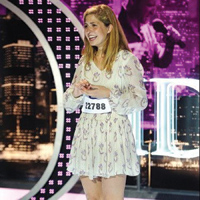 something in her that they liked because Jayne received a coveted “golden ticket.” “I was on verge on tears the entire time. As soon as I got the ticket, I burst into tears of relief that the audition was over!” Jayne laughs.

The golden ticket sent Jayne into the next round of auditions, and this time they were held much farther than 30 minutes from her home. Jayne traveled to California for the Hollywood round of the popular show, where she sang “Over the Rainbow” for the panel of judges. “It was my own version of the song—it had a lot of elements of jazz in it,” she says. “The scariest part of the whole process was singing for the judges. It almost seemed surreal that I was in front of these talented and famous artists and that I was singing for them!” And yet, as Jayne continues, it was also an emotionally draining experience. “They were debating about my singing in front of me and being all dramatic. In the end, they said I did not know who I was as an artist and I did not move into the next round.”

While Jayne did not move forward in the auditions, she says she enjoyed every aspect of the audition procedure. “I learned so much—not only about myself as an artist but also the entire process behind the show.” In fact, Jayne says she was amazed at how much is caught on camera. “It was so cool to see how everything works, like what footage and interviews end up being chosen. They had so much to choose from because they learned so much about everyone, even the people who didn’t make it. They interviewed family members and shot footage of people just walking around. It was amazing.” For Jayne, the opportunity to see all of this was worth the long plane ride and hours of anticipation. “It was really, really cool,” she says.

American Idol was just one experience in what Jayne hopes will be a long career in music. While she is not sure what path in the music industry she wants to take, she knows that music is in her future. “I am not really sure what I wish to do. I can either continue pursuing classical music, or I may go in a different direction. I am just trying to soak in life right now,” the 19-year-old explains. As of now, Jayne is studying classical music at the University of Michigan, as well as continuing with voice and piano lessons, all of which she started learning and taking at an early age.

“In fifth grade, I started to take private voice lessons, and then as a sophomore at Hinsdale Central, I started taking voice lessons at school.” In fact, Jayne says that she was most influenced as a singer by her voice teacher. “My voice teacher, Danielle Yilmaz, who was recommended to me from a friend, is an inspiration to me as a singer. She has taught me everything I know,” shares Jayne. But Danielle is not the only teacher who has influenced her, and her second mentor is known throughout all the Hinsdale singers, according to Jayne. “One of my high school teachers also had a huge impact on me. Patricia Hurd, my voice teacher at Hinsdale Central, was extremely helpful in and supportive of my singing career. Pat shaped me into becoming who I am now as a singer.”

And a very impressive artist Jayne Jaeger is. At only 19, Jayne has participated in various competitions, starred in school musicals, and most importantly, had the courage to audition in front of the infamous American Idol panel of judges. She has let her passion for music guide her throughout her life and plans on continuing to let it lead her into her future. “I just love music. It is just a part of who I am and I don’t remember a time when it wasn’t part of my life,” Jayne says with a nonchalant shrug.