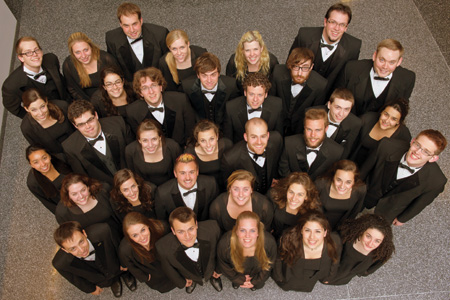 Carina DiGianfilippo has traveled the United States and Canada in her time with the Syracuse University Singers, including stops in Washington, D.C. and San Francisco. On March 10, she’ll be back in her hometown of Hinsdale with the group as they perform at The Union Church, part of a whirlwind weekend that will take them from St. Charles to the North Shore with a stop on Michigan Avenue in between.

“I’m really excited to be back. It’s nice for my family to have a chance to see what I’m doing. Because Syracuse is so far away, it’s hard for my cousins and others to make the trip,” Carina says.

A senior at Syracuse University (SU), who is currently auditioning for graduate programs in operatic performance, Carina sang in the choir at Clarendon Hills Middle School and Hinsdale Central High School. She enjoyed performing in musicals both as part of the theater program at Central and in productions outside the school. “Central has always been known for having strong performance programs,” she says.

Dr. John F. Warren, Associate Professor of Music and Director of Choral Activities at SU conducts the University Singers. Carina cites the conductor as a valuable mentor, saying, “Dr. Warren has always been great. I’ve worked with him for all four years at Syracuse and he wrote my recommendation for graduate school.”

The ensemble is comprised of 36 undergraduate and graduate students from a variety of disciplines and is known for performing a diverse repertoire with excellence and exquisite attention to detail. Their performances may include a Renaissance motet, an African-American spiritual, a grand orchestral masterwork, or the premiere of a contemporary composition, each of which they sing with a great understanding of style.

The Syracuse University Singers will perform at The Union Church of Hinsdale, 137 S. Garfield Avenue, at 4:30 p.m. on Sunday, March 10.