ST. BARTS: THE SAINT TROPEZ OF THE CARIBBEAN

The French West Indies island of Saint Barthélemy, also known as St. Barths or St. Barts, has long been considered a playground for the rich and famous, thanks to its white sand beaches, clear turquoise waters, gorgeous mountain vistas, gourmet French restaurants, and chic luxury boutiques (think Cartier, Chanel, Longchamp, etc.). While superlatives rule on this exclusive, sophisticated island, you won’t find anything oversized here except for the yachts—all-inclusive resorts, casinos, mega-cruise ships, and high-rise hotels are not permitted to destroy the distinct French charm. Neither is bad weather. The climate on St. Barts is as close to paradise as it gets, with average daily temperatures ranging from 72 to 86 degrees.

GETTING THERE: St. Barts is a 15-minute flight from St. Maarten, or an hour flight from Puerto Rico, eliminating the St. Maarten airport and its many potential hassles.

ROCK STAR ACCOMODATIONS: When in Rome, do as the Romans do, and when in St. Barts, stay at the aptly named Eden Rock, a collection of luxurious Fantasy Island-style villas located on a rocky promontory overlooking coral reefs and the blue waters of St. Jean Bay. The hotel’s ultra-luxe Villa Rockstar boasts a recording studio, Villa Nina, its own art gallery, and Fregate Suite has a private spa pool by the ocean side. And while top-notch French restaurants abound in St. Barts, dining at the hotel’s multi-leveled On the Rocks, which offers premium water views and Asian-inspired cuisine from world renowned chef Jean-Georges Vongerichten, is a must. edenrockhotel.com

FRIEND OF A FRIEND: If you don’t happen to know a Russian billionaire with a mega-yacht, perhaps you have a friend who does. The best parties in St. Barts are held on yachts moored in Gustavia Harbor, and as the long-standing tradition goes, if you’re the friend of a friend, you’re in. If not, consider completely crashing the party, another long-standing island tradition. After all, where else are you going to bump into the likes of Demi Moore, Orlando Bloom, Miranda Kerr, Kanye West, Martha Stewart, Salma Hayek, Marc Jacobs, Stephanie Seymour, Ellen DeGeneres, George Lucas, Jon Bon Jovi, Prince, Tamara Mellon, and Paul Allen? All have been guests at Russian oligarch Roman Abramovich’s over-the-top yacht parties over the years.

TWINKLING STARS 24/7: If you can’t score an invitation to a yacht party, no worries. On an island that measures only 10 square miles, celebrities dot every single corner. Singer Jimmy Buffett owns a house, as do David Letterman, Steve Martin, art dealer Larry Gagosian, photographer Patrick Demarchelier, and French singer Johnny Hallyday. No wonder St. Barts is known as the most glamorous island under the Caribbean sun.

TURKS & CAICOS: THE PRIVATE SANCTUARY OF THE CARIBBEAN 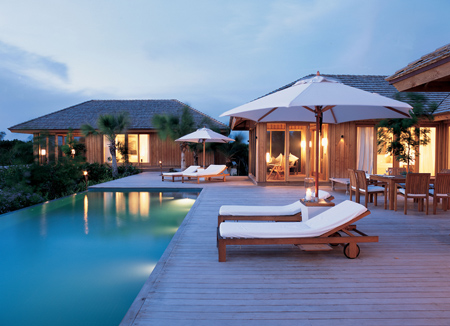 It’s hard to believe that a quick 90-minute flight from Miami can transport you to an entirely different world, but Turks and Caicos Islands proves it. Turks and Caicos boasts some of the best beaches and most exclusive resorts offered in the Caribbean, and the world. With eight main islands and over 200 additional smaller islands, planning a tropical trip to the British-reigned island can be a little daunting. Luckily, celebrities such as Donna Karan and Oprah have simplified the task: Parrot Cay Island. Situated on the northern end of Turks and Caicos’ eight island string in the area known as the Providenciales, Parrot Cay Island is as close as you’ll ever get (hopefully) to a deserted island. Accessible exclusively via boat, Parrot Cay has no streetlights or cars, thus no light or air pollution (relatively speaking), ensuring a quintessentially private island experience. The exclusive atoll plays host to a bevy of A-listers and their million dollar vacation homes, but the real riches are the island’s pristine beaches and cerulean waters that look virtually photoshopped.

GETTING THERE: Due to the exclusivity of Parrot Cay Island, you’ll need a little help getting there. A swift 35-minute boat ride (from the Providenciales International Airport) can be arranged pre-departure through your intended resort or can be hired via service.

PARROT CAY IS A-OKAY: Unless you’re invited to the vacation homes of either Bruce Willis or Michael J. Fox, Parrot Cay Resort is the place to stay whilst visiting the island. The aptly named hotel offers every amenity imaginable and has won countless awards for excellence in service and accommodations. The exclusive resort has thought of every small touch to make your stay as unique as the island it resides on. From the moment a Parrot Cay representative greets you and whisks you to the island, to the cheerful staff replenishing your poolside drink before you’ve even realized it was finished, the hotel makes it easy to let go and focus on relaxing.

SPAAHHHHH: Not only is Parrot Cay Resort home to the best accommodations on the island (aside from, maybe Keith Richard’s vacation pad), it also boasts the Shambhala Retreat Spa. Boasting an extensive laundry list of treatments and relaxation, this 6,600-square-foot holistic glass spa overlooking the island is the perfect companion to your island escape.  Offering everything from your standard deep-tissue massage to acupuncture, Parrot Cay’s world-class spa is proof there is paradise on earth.

LIFE’S A BEACH: Due to the island’s exclusivity, the beaches that encompass the island are some of the best in the world. Practically untouched by modern-day standards, the white sand and vibrant blue waters are mesmerizing, and offer plenty of activity. Teeming with marine wildlife and coral reefs, Turks and Caicos offers plenty of snorkeling and scuba diving adventures. If that is not your cup of tea, don’t fear—along with Parrot Cay’s surplus of water sports, the resort can arrange for private dining experiences in secluded areas and excursions to neighboring islands.

GRAND CAYMAN: THE ADVENTURE HOT SPOT OF THE CARIBBEAN 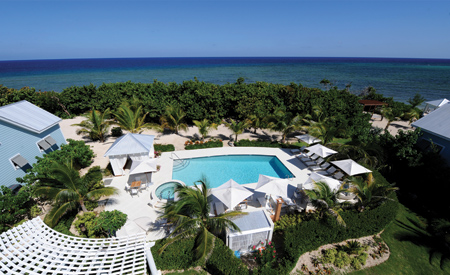 Grand Cayman isn’t called “grand” for no reason; as the largest of the three Cayman Islands, Grand Cayman features world-class dining, breathtaking beaches, and a multitude of thrills (swimming with dolphins or stingrays, anyone?) Located just south of Miami, the island’s carefree, adventuresome spirit is evident everywhere. As you pack to visit Grand Cayman, keep in mind that the temperatures range from the upper 70s to low 90s most of the year—in other words, prepare for near-perfect vacation weather.

GETTING THERE: Most major airlines offer flights from Chicago (with a stop in Miami). Non-stop flights are available from Chicago on Cayman Airways.

A LITTLE BIT OF HEAVEN: Most boutique hotels aren’t great for families, but the Cotton Tree Grand Cayman is a very luxurious exception. Each of the Cotton Tree’s four unique plantation-style cottages feature two bedrooms, living room and dining rooms, gourmet kitchens, spa-like bathrooms, plasma TVs, WIFI, Apple TVs, and a sparkling pool mere steps away from the beach. Think of it as your very own beach home—complete with your own staff, private chef, and a first-class spa. Did we mention massages are available on your private beach?

DIVE RIGHT IN: Besides its breathtaking beaches, Grand Cayman is known for offering some of the best scuba diving in the Caribbean, featuring amazing wall dives, beautiful coral reefs, and visibility that often reaches more than 100 feet, with opportunities to see everything from spotted eagle rays to sea turtles, stingrays to reef sharks. Divers will also see plenty of real life shipwrecks, including big freighters, small island cargo vessels, landing craft, and even some confiscated drug runners. If you’re in the mood for even more thrills, go on a night dive, which uses UV illumination to light your way underwater.  When you tire of diving, check out The Turtle Farm in the West Bay, The Butterfly Farm at Seven Mile Beach, which features more than 70 species of butterflies, or take the kids swimming with the dolphins. That’s certainly something to squeal about!

THE GOOD LIFE: Known as one of the best culinary destinations in the Caribbean, one of the toughest decisions you’ll have to make on your Grand Cayman visit is where to dine. From the fish tacos and burgers at Sunshine Grill to the Ritz Carlton’s Blue by Eric Ripert (of Le Bernardin fame) featuring locally-caught seafood and more than 800 wine selections, to the Indian-inspired Blue Cilantro, one of the Cayman’s newest additions, it’s best to leave the diet behind. But bring plenty of spending money, because the shopping on Grand Cayman is tax-free—and with luxury brands such as Versace, Gucci, and Tiffany & Co. to be found on the island, it will be hard to resist taking home a few goodies.