“We want to do a show that appeals to 22-year-olds, 45-year-olds, and their moms,” Eric Ferguson says about the sustained success of 101.9 The Mix’s The Eric & Kathy Show, which has entertained Chicagoans for 17 years and counting. “Our goal is to span different generations with a show that has something for everyone.” The long-standing team certainly is accomplishing that goal.

The morning show is tops in the ratings and truly dominates the 25-to-54-year-old demographic. Eric and Kathy Hart’s mix of celebrities, personal anecdotes, and a “we’re all in this together” approach to navigating personal relationships—both familial and romantic—keeps listeners laughing in recognition and discussing the topics well into each day.

This generational interplay also factored into the Ferguson family’s decision to make Hinsdale home after 15 years in Lincoln Park. With a brother in Hinsdale, in-laws in Burr Ridge, and other family members in Darien, they had spent plenty of time here. “We always said that if we ever left the city, it would be for Hinsdale.”

So while many families consider several communities before settling here, the lure of family nearby, with cousins to play with and casual cookouts to throw together, added to the other pluses of the village, and the Fergusons only scouted for homes here in Hinsdale.

After years of casually checking out properties around town, they decided that 2012 was the time to buy. Yet sometimes, even when the moment is right, the inventory isn’t and you just need to build something extra special.

Working with J. Jordan Homes, the Ferguson family built a home that is just right for their needs. The residence was finished last summer, and they were moved in by the start of the school year at the end of August.

“It’s a bit of a shift culturally,” Eric says with the understated delivery that makes him so beloved on air. He adds that while it is definitely an adjustment, the transition is going well. Echoing the sentiments of many who move here from the city, he says, “We love how beautiful and peaceful Hinsdale is, we love how safe it seems to be.”

Eric likes his work, saying, “The stars and moons aligned when our show came together,” but he is definitely enjoying his after-work hours without the din that comes with downtown living. “There is a calming element here. For me, the peaceful environment is very soothing—much more so than coming home to the noise of Lincoln Park.” Certainly anyone with a high-pressure job can appreciate the idea of decompressing in a beautiful backyard when the day is done.

The kids are enjoying what he calls the “freedom and flexibility” of riding bikes into town to meet up with friends or stop for a snack at Dips & Dogs. It’s a contrast to his upbringing in Elburn, which is a smaller, more rural town of only 1,200 people. “This is that kind of quintessential Pleasantville suburban experience,” Eric states. 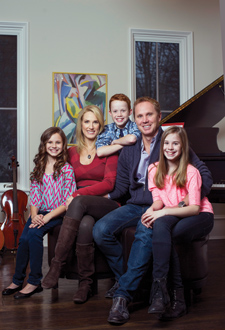 The kids like their schools. Eric and Jen say, “The schools are great. Very challenging, but that kind of structure is good for kids. It helps with whatever life brings.” The school ecosystems have also been a highlight for the couple, both of whom are enjoying getting to know other parents. “The parents are really welcoming, really friendly, and seem to take an interest in all the kids.” They’ve all gotten into a groove with the group, many of whom they also encountered when Eric co-hosted the 2012 Hinsdale Junior Woman’s Club (HJWC) fundraiser, Clubbing for a Cause, with actor Colin Egglesfield. “That was our first real foray into meeting a lot of Hinsdale residents,” Eric says, adding, “We met a cross section of people and many of them became the people we socialize with now.”

That party, with its luxe lounge atmosphere, was a very successful fundraiser for HJWC, contributing greatly to the $200,000 that the members presented to Ronald McDonald House Charities at the end of their season. Eric says, “The chairs of that event [Courtney McCarthy and Michelle Spellman] just did an incredible job. It was a lot of fun.”

HJWC will present their 2013 fundraiser, “The Gatsby Gala,” on February 9 at The Hyatt Lodge in Oak Brook, and this year’s team is definitely feeling the pressure from last year’s success.

HJWC is supporting Hephzibah House, a much smaller charity this year. The ladies are still expected to pull off another fantastic evening. Newcomers to the area should take a page from Eric and Jen’s playbook, round up a group of neighbors and parents to head for Gatsby’s Terrace and Casino. “Those ladies did an amazing job,” Eric graciously says one more time.

Beyond getting together with their circle of friends, Eric says that they’ve ventured into town to dine at some of the restaurants, calling out CiNe in particular. Peter and Dana Burdi’s modern tacqueria has quickly become a favorite with residents and foodies from the area since its early November opening, so it comes as no surprise that the Fergusons would want to give it a try.

So while our dining scene may not rival that of Chicago’s 60614, we do have some standout spots like this one. Plus, it’s easier to park. “We love the downtown area,” Eric says. “It’s quaint and charming and just what you want when you think of suburban living.”

When asked about the signature billboards that pop up on area highways to promote The Eric & Kathy Show each year, Eric remains mum. “You’ll have to wait and see. We just might surprise everyone.”

Hinsdale Living wishes the Ferguson family continued good fortune and even more enjoyment of the community this year.