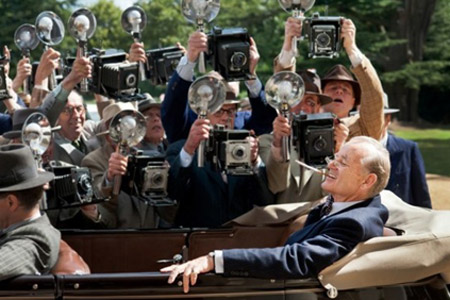 Within a few minutes of the film opening, FDR (Bill Murray, Moonrise Kingdom) takes his sixth cousin, Daisy (Laura Linney, The Big C) out to a beautiful idyllic field, places her hand on his knee, and offers her a very unexpected kind of new deal. From that moment on, he feels like a slimy, adulterous, coercer and it just gets worse as the movie goes on. Thankfully, a sympathetic figure arrives in the form of King George VI (Samuel West, Notting Hill), still struggling with his King’s Speech stutter, who must find a way to get America’s support in the looming war. He also must quietly battle the admonitions of his wife, Queen Consort Elizabeth (Olivia Colman, The Iron Lady), that he behave in a more dignified and royal manner, not stooping to the level of these country bumpkin Americans. Any time the Brits aren’t around, FDR hits the bottle and tries to balance the women in his life under the nose of his wife, Eleanor (Olivia Williams, Anna Karenina). 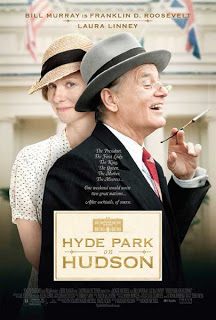 The problem with Hyde Park of Hudson is that it’s tonally conflicted. Instead of deciding to be a light hearted look at powerful historical figures learning to see each other as people or a dark look at the sexual obsessions and machinations of a powerful man, it decided to be both at once. The tonal tug of war that follows keeps the audience mistrustful of the lighter moments and uncomfortably complicit in the dark ones. The performances are fine, but the only character the film seems to truly like is King George, who must step down of his wife’s enforced pedestal to forge an alliance with a nation that still resents him. I’m not sure why Bill Murray would want to play this version of FDR. This rendition is apparently based on letters and journals found after the death of the real-life version of Daisy and it’s unflattering to the point of devaluing the dime.

The cinematic panoramas are beautiful, but much like the tonal indecision, the editor took a little bit of all the coverage shot and overcut each non dialogue moment. Where one beautiful tracking shot would get our characters and plot from A to B, they chose between two to five truncated segments of beautiful shots. It makes it feel slapped together instead of designed.

I realize that I keep throwing Lincoln back in the face of every other bio-pic this season, but there is just a world of difference between Daniel Day Lewis invoking the words “I am the President” in pursuit of the 13th Amendment and Bill Murray shouting “I am the President” so that his aging mother will let him have a cocktail. Maybe the difference is that Hyde Park on Hudson was made by a British director with money from the UK Film Fund. Hmm. Interesting.

My personal opinion: I was kept uncomfortable through the entire movie. I would have preferred to see either the dark or light version of this story instead of the conflicted, bipolar one it currently is.