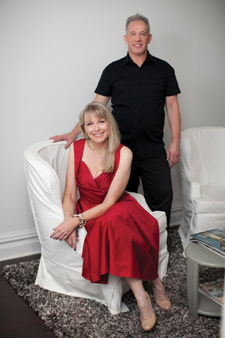 Leaving The Faceloft after my initial treatment, a feeling of happiness enveloped me. I had been told that the treatment had a calming effect and I believe it, but I also think that spending time around the delightful people behind the discreet Harrison Place aerie had a lot to do with the feeling of peace and contentment.

Owner Heather McNair Stoffer was a client of celebrity aesthetician Steven Miller, a skin guru trusted by such luminous beauties as Sofia Vergara, Winona Ryder, and Julianna Margulies, during her own days as a successful actress in Los Angeles.

Well, client, yes, but the two have always gotten on like gangbusters, so much so that she was asked to make her standing appointment near closing time to keep their giggles from distracting the hushed environment.

Three years ago, both were living in the Chicago area and the recently relocated Steven began setting up shop in Heather’s guest room one day a week, first to perform the treatment she so missed on his friend and quickly thereafter on an ever-growing group of local women.

It’s not the first time Steven has created a makeshift skin care center in a high-profile friend’s home. In the early 1990s, he did the same thing with Vogue Contributing Editor and International Best Dressed List Hall of Fame member Marina Rust.

With gleaming floors, soft slipcovered seating, and original photography of Hinsdale by a local young man, Heather has created an oasis for Midwestern men and women to receive the same effective approach to skin care as those who live on the coasts. “It’s really a holistic, sensible approach to skin care,” she says. Clients range from teenagers seeking relief from breakouts to older people looking to smooth and firm their skin.

Steven is a one of only a few highly skilled practitioners of the IDerm Deep Skin Ionization System created in 1937 by German scientist and chemist Dr. Paul Meminger.

The central feature of Dr. Meminger’s technology was the application of electrical currents to treat the skin. This electrical current (commonly known as a galvanic current) introduces vitamin-rich solutions into the skin. Following Dr. Meminger’s discovery, a galvanic treatment machine was designed and developed, now known as the IDerm Deep Skin Ionization Process. The treatment plumps, balances the body’s pH, and provides a calming effect.

Entering The Faceloft, I was slightly nervous because my skin hasn’t been at its best recently. Redness and bumps have been a problem for the past few months. The issues had been alleviated a bit by a series of expensive dermatologist treatments, but had recently grown worse, and I was worried about being judged by someone with a client list full of A-list stars and top entertainment industry executives. Instead, I found myself laughing through the most thorough cleansing my face has ever received.

Steven explained everything he was doing and why. He kindly answered questions about trendy skin care regimens and the benefits of manual exfoliation and oxygen. Everything was customized to my skin and my experience. The IDerm portion of the treatment was pleasant, with a mild tingling and indeed a sensation of calmness.

After the treatment, my skin looked better than it had in months—quite possibly years. It felt smooth and soft. I had to look very closely to see a pore and the blotchy redness was greatly diminished, much more so than with those dermatologist treatments. Heather had graciously set out fresh fruit and water for me, and she and Steven prepared some samples of products to take home.

These products, like my service, were specific to the needs of my skin. In keeping with the friendly atmosphere of The Faceloft, there is no hard sell. No row of products lined up at the desk with dire predictions of a lackluster complexion if they aren’t all purchased. “The service complements loyalty,” Steven says. He knows that no one wants to feel pressured and often you want to try a product or regimen out at home.

The Faceloft is intimate, as benefits the service and the personalized approach. The treatment lasts 60–70 minutes and is the perfect break in the day for an individual or pair—Steven and Heather have hosted siblings bonding and mid-day girls’ getaways.

Treatments can be applied as frequently as every third day, or Steven will design a custom program of visits for those who are planning for a special event that might be a few weeks or months away. “It’s just like going to the gym,” Steven explains, “but better.” I can vouch for the fact that you will see plumping, firming, and smoothing results after a single visit, meaning that it is the perfect special event service to book before a fundraiser or reunion. Steven calls it “revenge beautification” that transcends simply looking looking great, instead leaving people, or just one person, with the knowledge that the one who got away looks better than ever.