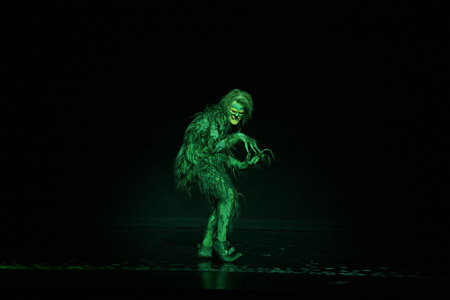 The story is familiar to those who have cherished the Boris Karloff narrated special for years. Frustrated by the continually happy existence of the Whos, the charming group of people who live below his mountaintop lair, the always irascible Grinch decides to teach his unknowing nemeses a lesson. Donning Santa garb, Grinch descends on Whoville and proceeds to steal every Christmas decoration and present in sight. But, the surprising reaction of these cheerful townsfolk soon changes our gleeful bad guy’s outlook forever. 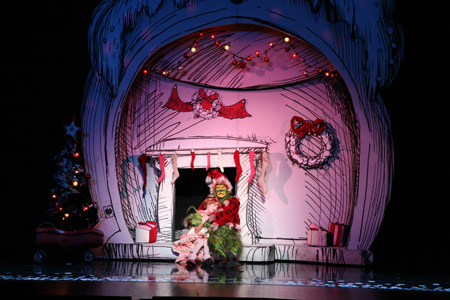 Granted this adaptation, by Timothy Mason and Mel Marvin, has a bit of unnecessary padding to elongate Seuss’ short story to production length. But the retention of Seuss’ original songs, co-authored with Albert Hague, and the brilliant sets by John Lee Beatty, costumes by Robert Morgan and wigs by Thomas Augustine do much to make this a magical evening of escape. Simplicity has a play in things, too. The show’s production highlight occurs as Grinch and his beleaguered dog, Max, head down through the skies upon the tiny village, outlined by a plain black backdrop. 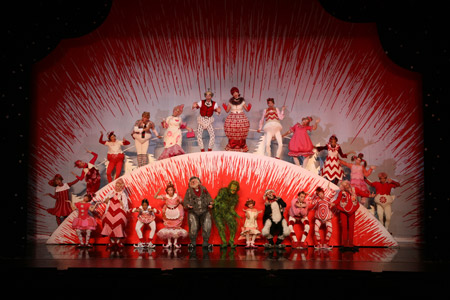 Most importantly, director Matt August guides skilled Stefan Karl to a masterfully fun – and scary – performance as the Grinch. Karl radiates with energy and is obviously finding delight in every opportunity for comic villainy within the character. Further excellence is provided by Bob Lauder whose exquisite baritone marks the show’s narration with a distinguished quality. Seth Bazacas, meanwhile, provides plenty of squirmy heart as ever faithful Max. Extra audience points are earned for these two as they lead a sing-a-along of “You’re a Mean One, Mister Grinch.”

Dr. Seuss’ How the Grinch Stole Christmas! The Musical runs through December 16th at the Cadillac Palace Theater, 151 West Randolph Street. Tickets are $18-$95 can be purchased at broadwayinchicago.com or by calling 800-775-2000.