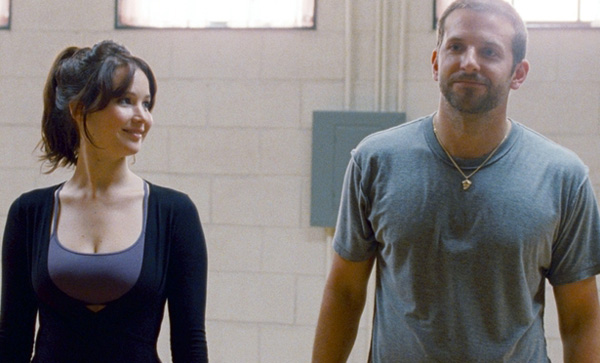 Pat (Bradley Cooper, The Words) lost his mind when he found his wife cheating on him and nearly beat her lover to death, landing him in a mental institution. When he gets back home to his quirky, OCD, bookie father (Robert De Niro, New Year’s Eve) and his loving mother (Jackie Weaver, The Five Year Engagement) he’s determined that love can cross all restraining orders and he can get her back. His whole plan for a reunion hinges on Tiffany (Jennifer Lawrence, The Hunger Games), a neurotic whirlwind of a widow, who agrees to help him get his wife back if he’ll be her partner for a dance competition. 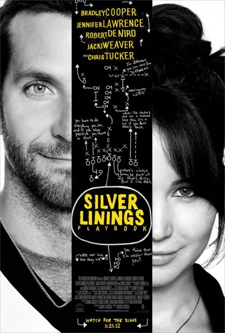 Man, people are going to keep underestimating Bradley Cooper if no one goes to see these movies he’s really good in. This flick and The Words both prove he’s more than just a Hangover or an A-Team, but they’re just not lighting up the box office. His bi-polar swings as Pat are in turns hilarious and devastating, and watching him opposite Jennifer Lawrence is great. She’s just fantastic. Tiffany is about as far from Katniss Everdeen in The Hunger Games as she could get as she curses a blue streak and tries to dance her way back from a history of notorious promiscuity after losing her husband.

Following these two socially maladjusted characters is fascinating, because you never know what they’re going to do next. The first hour and a half had me on the edge of my seat as Pat and Tiffany proved in situation after situation that they’d say whatever they felt like at any time and had no regard of its affect on those around them. Each of the supporting characters are also given their own journey, fleshing out the picture with a wonderful array of interesting puzzle pieces on their own. The only problem is when the filmmakers decide they need to use those pieces to quickly assemble a puzzle. Suddenly, the movie takes a series of sharp, counterintuitive turns to force a climax to happen. It stops feeling exploratory and unique and starts to feel very manipulated.

Writer/director David O. Russell (The Fighter, I Heart Huckabees) goes back to one of his favorite staples, overly self-analytical, neurotic characters in therapy who can tell you everything that’s going on inside of themselves; what makes them tick, what their challenges are. This one is based on a book of the same name, but it seems like he was only interested in the first half and compressed the second half into as few screenplay pages as he could. At the end, characters are tying everything up with mini-speeches as bizarre alliances, revelations, and changes of heart appear out of nowhere, unearned.

My personal opinion: For grown-ups only. I enjoyed it because of the unexpected journey of the first three quarters of its running time. That last quarter bumps it down to rental territory though. Jennifer Lawrence is just as loveable as all get-out in this, and her corset coat is one of the cooler movie character fashion statements of 2012.