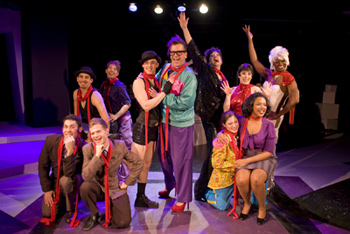 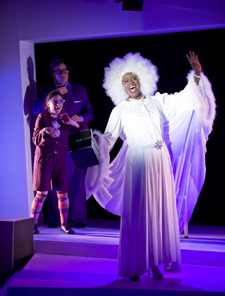 Yes, there are only two Minnelli’s here and that may be this often delightful show’s primary disappointment. One also senses that the anticipation that builds to their arrival, in the latter half of the show, could have been streamlined a bit. Still, as playwright and lyricist, Bradley creates a go-for-broke universe that often resonates with emotional power. With wise comic undertones, he establishes how we could all learn a thing or two from Minnelli’s Energizer Bunny attitude. In fact, lyrics like “Liza can’t act, Liza can’t sing. Liza can’t bring what her Mama could bring. But Liza showed up and she kicked in the door. She opened her mouth and they fell on the floor” have to be some of the most potent ever written in musical theater.

Meanwhile, with valued assistance from the show’s varied designing team, director Scott Ferguson creates an exciting and eye popping universe. He establishes a true heart beneath the florescent proceedings, as well. 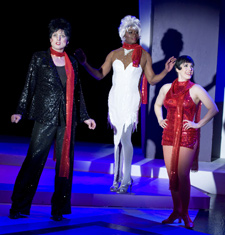 The show’s many visual and sonic wonders include some amazing feats of athleticism from ensemble member Sean Michael Hunt and Sean Blake’s fluid power as Mystique, the drag persona who guides Ticklebottom and Reggie on their journey with sass and strength. Of course, the show’s success is measured by those who embody Minnelli and Danielle Plisz, as Liza Then, and Bradley, as Liza Now, beguile with comic snap and true vitality. All involved, though, create a merry and delightfully alternative take on seasonal celebrating that is sure to reverberate with everyone with an open heart and mind.