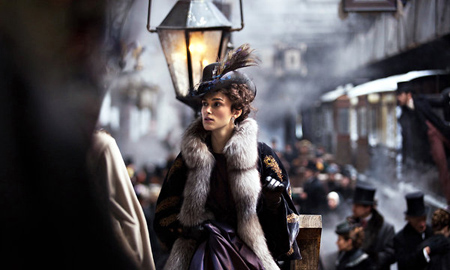 Anna (Keira Knightley, Seeking a Friend for the End of the World) is the wife of a respected politician (Jude Law, Sherlock Holmes: A Game of Shadows), who substitutes any display of affection with devotion and reliability. When a passionate young soldier (Aaron Taylor-Johnson, Savages) sweeps her off her feet, she must choose between romantic love and her place in society. This is a woman without any good options. 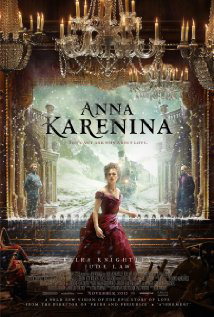 I’ve not read Tolstoy’s book and I haven’t seen any of the 11 previous film versions, so experiencing this story fresh for the first time, I loved it. Wright chooses a very specific device to keep the audience separated from the characters right from the beginning. The story is told as if on the stage, scene changes happen in front of our eyes with magnificent sets dropping from above in complexly choreographed, single-shot sequences. Deliberately staged extras move in complete synchronization and suddenly freeze into poses for elaborate visual metaphors. It sounds SO pretentious, but it’s just so pretty. It’s initially jarring as actors walk from grandiose environs into a bare bones backstage area, past stage ropes and people still in character, up into the catwalk, which serves as the location of dock and street life, and the scene continues. But once acclimated to it, it’s wonderful. More than once the combination of set design, camera work, lighting, and choreography gave me chills. Everything is intricately considered and designed. Nothing feels organic, nor is it supposed to. Stoppard’s at it too. Characters speak in impossibly composed sentences full of veiled meaning and wit.

The fact that you’re drawn into the relationships and story despite the constant pull of an aesthetic barrage is thanks to wonderful performances from every actor. Knightley helps us empathize with Anna even as she loses our sympathy, Law takes Karenin from cold and unfeeling to enraged to compassion and sadness with awesome subtlety, and Matthew MacFadyen (Pride and Prejudice) is hilarious as Anna’s philandering brother.

It also has to be said that the Director of Photography, Seamus McGarvey (Avengers), who last worked with Wright on Atonement outdoes himself. From making the most of haze-filtered natural sunlight to very theatrically dramatic lighting, this is the most technically ambitious film of the year, and he nails it in every scene. It’s absolutely amazing.

My personal opinion: I love when people skillfully play with the form of a movie. Joe Wright and his team are the stars of this show; also the movie to beat for the Art Direction and Costume Design Oscars this year. All of the adultery makes it a pretty tough story, but if you have any interest in it, see it in the theater. It’s going to lose something if you watch it in your living room.