Nope. Despite lovely performances by unquestionably talented actors, an uninteresting screenplay and lifeless direction make Hitchcock a pretty dull visit with the Master of Suspense.

Alfred Hitchcock (Anthony Hopkins, Thor) has just come off of the success of North by Northwest and chooses a pulpy little horror novel based on the serial killings of Ed Gein called Psycho as his follow-up. Everyone thinks this is a grave mistake, including his indispensable collaborator and wife, Alma (Helen Mirren, The Debt), but she trusts his instincts enough to believe they will come out on top. Hitch spirals into increasing alcoholism, binge eating, and voyeuristic obsession with his leading ladies, Vera Miles (Jessica Biel, Total Recall) and Janet Leigh (Scarlett Johanssen, Avengers) as he works on the film, and Alma is pulled further into a side project that begins to look dangerously like the spark of an affair. If the film is to become a success, the two of them need to find their way back to each other and collaborate as they have before. 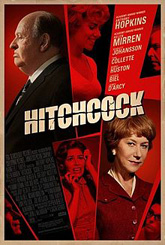 My biggest problem with the movie might be an unfair one. It’s based on what’s called the most comprehensive book about the making of a film ever and we visit the set of Psycho a handful of times for an accumulated screen time of maybe 15 minutes. The visits to memorable set pieces are brief, tepidly shot, and show director Sacha Gervasi’s disinterest in both Hitchcock’s abilities and the classic film that’s being made. The script hops over the interesting and amusing well-known tidbits of the making of the film and focuses instead on Hitch’s various personal excesses and on a growing rift between himself and Alma. Fine. So we never even see Hitchcock anywhere near the still standing and well preserved Psycho house on the Universal backlot. Okay. So they’re going to take the technical filmmaking innovation that took place over a three-day shoot as one of the most recognizable and emulated scenes in film history is shot and sum it up as one take of Hitchcock losing his temper in a jealous rage as he shows the Mrs. Bates stand-in how to wield the knife. I cry foul, movie. One of Hitchcock’s most celebrated achievements in his outstanding career is used as a metaphor for his weakness? Lame. Super disrespectfully lame. They wink at his public persona a few times and make several uses of his legendary dry wit, but none of his greatness as a filmmaker is explored. Any quality in his filmmaking is given over to Alma’s influence and we see Hitch as nothing more than a figurehead for the brand name. Even scenes that are meant to inspire, like his exuberantly conducting the screams of the audience from the lobby during the premiere of Psycho feel very staged and forced. Not to mention the super lazily written appearance of Ed Gein as Hitchcock’s sounding board when he’s alone, a sloppy, bipedal metaphor for Hitch’s darker impulses. Whoa. I apparently liked this movie less then I initially thought.

Hopkins’ Hitchcock is a fine impression of the man’s public face. The private moments carry the same reservation and dry delivery and his bouts into sadness and rage are very subtle, even at their most drastic swings. Maybe that’s because so much of his face is buried underneath a pretty convincing prosthetic and most of the work has to be done with his eyes, or maybe he was just trying to keep the anger from looking too Hannibal Lecter’y. Mirren delivers the most emotionally satisfying moments in the film and makes Alma a very strong, very talented, very conflicted woman. If the flick had just been called Alma, I might have had a better time with it.

It’s great to know that Hitchcock relied on Alma so much, and that her contributions were largely uncelebrated except by those in the inner circle and by Hitchcock himself in public speeches, but I would have liked to have seen some of the things that made him great too, not just the stuff that made him weak.

My personal opinion: I’d skip it. There are enough good things in the theater right now that you don’t need to waste any time with this. I would be interested to see what this could have been if it had been made by a filmmaker that liked movies.