Naturally, Second City’s habit for molding essential comedy stars has made improvisation a legendary art form in the Midwest. Becoming the next Steve Carell, John Belushi or Jane Lynch may be a far off dream, but the ensemble team at Laugh Out Loud is eclectic and winning, providing two evening shows every Friday and Saturday. The first, at 7:30 p.m., is family friendly while the 9:30 p.m. offering is far more adventurous.

A recent later night offering found troupe members running, wildly, with audience suggestions for different comedic exercises that definitely showed off their well honed skills. A game entitled “Emotional Rollercoaster” found the foursome careening between exaggerated happiness, overwrought despair and fierce intensity within moments of each other. “Interrogation” involves a clueless cast member trying to guess which audience generated crime he committed by the mild clues given him by his co-stars, whom are playing belligerent police officers. “Spelling Bee,” meanwhile, finds them creating sentences for imaginary words given to them by the crowd. 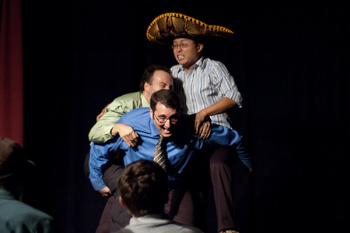 Participation is obviously the name of the game, here, but each Laugh Out Loud performer definitely shines in their own right, often taking awkward suggestions and building an amusing and intelligent base out of them. Thin Harz Sondericker, has the mobile face of a character actor, and the ability to make each situation unique. Guy Wicke and Jeremy Schaefer have pleasing everyman qualities and a jovial approach to creating their material on the spot. Lone female, Shelby Jones, is the spark that holds the show together. Her boisterous energy is appealing and draws the audience in, willingly.

Of course, those who want to try to match wits with these happy-go-lucky professionals have plenty of opportunities, as well. Laugh Out Loud offers classes for teens and adults along with bachelorette parties and a variety of themed shows, as well.

Tickets for weekend shows, presented at the Laugh Out Loud Theater on Streets of Woodfield, range from $12-$19. Information on classes and shows can be gained by visiting loltheater.com or by calling 847-240-0386.