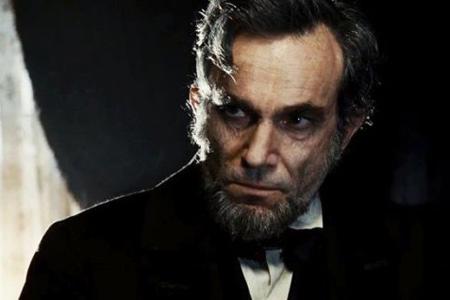 However, the dialogue is absolutely superb, Daniel Day Lewis is just…so…amazing, and I haven’t felt as riveted by passionate speechifying from a myriad of viewpoints in film since A Few Good Men.

President Abraham Lincoln (Daniel Day-Lewis, There Will Be Blood) has just been reelected to office and he’s determined to use the rising body count of the civil war to push through a constitutional amendment ending slavery. He must find a way to get the amendment through the House of Representatives while up against a brimstone spouting democrat (Lee Pace, Pushing Daisies) a passionate republican abolitionist (Tommy Lee Jones, Hope Springs) who thinks he’s not pushing hard enough, and the naysaying of his secretary of state (David Strathairn, The Bourne Legacy), as well as every other opinion in the capital and the nation. Shockingly, to have any hopes of passing the amendment he must find a way to buy democratic votes in the House and slow the approach of peace negotiations with the Confederates until a vote can be taken. 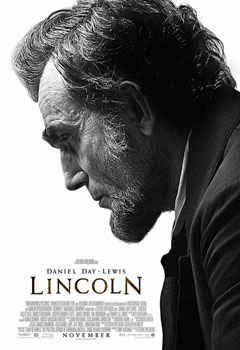 Screenwriter Tony Kushner (Angels in America) worked from the book A Team of Rivals to bring this movie to life. It is absolutely some of the best screenwriting I’ve seen all year. The points of view are so vivid and impassioned, the words so eloquent and convincing, and the way events unfold is spellbinding. A really outstanding task for a flick that’s 97 percent dialogue. It seems to stretch a bit toward the conclusion, but it’s important to see Lincoln processing the results of all of his decisions and machinations.

Spielberg’s hand is very subtle here and takes a back seat to his actor’s performances. His signature fast track/tilt up move was nowhere to be found. Instead, he favors really long tracking takes with barely perceptible motion until, before you know it, you’ve gone from a wide shot to a close-up while Day-Lewis holds you in rapt attention. Spielberg’s use of light is as masterful as ever though, several times Lincoln’s very long shadow enters a room well before him and as he exits the White House a very long shadow trails behind him. Simply awesome.

The entire cast is ridiculously good. Day-Lewis is a soft spoken Lincoln that captivates entire rooms with story after story, puts logs in his own fire, and lays on the floor of the White House next to his young son. When he does raise his voice at his wife or his nearest advisors it is more hypnotic than any action scene. It’s really something to witness. Tommy Lee Jones gives the best speech of his career and closes his contributions in perfect emotional silence. And then you have James Spader (Boston Legal), John Hawkes (Martha Marcy May Marlene), and Tim Blake Nelson (Oh Brother, Where Art Thou) running around hilariously trying to buy democrats on behalf of the president. Every character is given a chance to speak his or her peace and no actor wastes the opportunity.

My personal opinion: One of the best movies of the year. We’re going to see Daniel Day-Lewis walk the stage again. The audience of adults I saw it with audibly Oooh’ed after lines of intense dialogue and applauded the end of certain speeches. It was an awesome experience. And very moving.