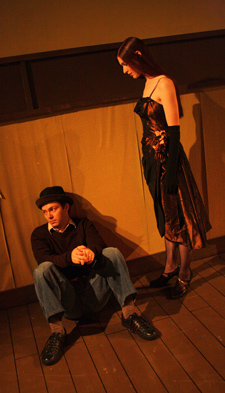 Two of these strangely wonderful exercises, 1955’s “Jack or The Submission” and 1951’s tart “The Lesson” are nicely collected together in Rare Terra Theatre’s adventurous “Disfunctioning: Two By Ionesco.”

Director Dragon Torbica chooses to open the evening with the more inscrutable of the two works, “Jack.” Seemingly a parable about   rebellion to conformity and adult responsibility, this piece details the pouty antics of a young man whom is encouraged to behave at an arranged meeting between his family and the parents of his fiancé. Ionesco uses dialogue like a short tone poem to emphasize the ridiculous nature of familial expectations. Meanwhile, the haunting images he conjures through the odd stories of Jack’s intended ultimately make the title character’s acceptance of his fate, comical and heart stopping, at once.

A favorite of dramatic literature classes, “The Lesson” is one of Ionesco’s better-known works. Detailing the fate filled meeting of a young female student and her learned tutor, this one act is intrinsically funny and menacing. Working a vibe similar to “Eyes Without a Face,” George Franju’s well-regarded film, Ionesco explores academia’s tragic underbelly, here. When the professor eventually takes his work to deadly serious levels, it is only the actions of a loving maid that can keep him in line – and out of jail! 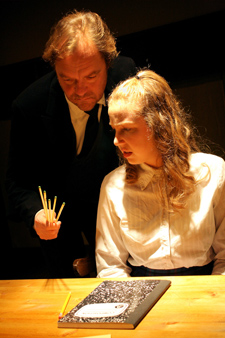 Torbica works with efficiency here, adding nice touches of movement and costuming to accentuate Ionesco’s points. His work on “Jack” has a playgrounds’ worth of enthusiasm. “The Lesson,” meanwhile, could benefit from tauter emotional constraints. One never feels a sense of apprehension for the vulnerable yet defiant student. Still, this is ultimately an incredibly solid evening of theater and a nice primer to a famed playwright.

Concerning the versatile cast, Nicholas Harrazin’s Jack and Vashti Emigh’s Young Pupil, both, shine with layered warmth and eclectic presences. Catherina Kusch’s Maid, in “The Lesson,” meanwhile, is an embellished wonder, pulling at your heartstrings and your funny bone, almost simultaneously.