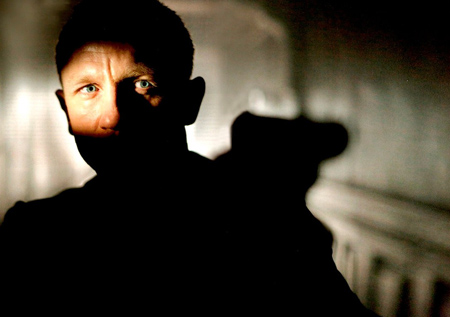 A hard drive containing the real identities of undercover MI6 British secret service agents is stolen by a ruthless hacker/murderer (Javier Bardem, No Country for Old Men). He threatens to reveal all identities to the world unless M (Judi Dench, The Best Exotic Marigold Hotel) accepts responsibility for her past sins, whatever those are. James Bond (Daniel Craig, The Girl with the Dragon Tattoo) must discover the identity of the hacker, retrieve the hard drive, and protect M, while proving that he is still up to the job after getting shot on a previous assignment. 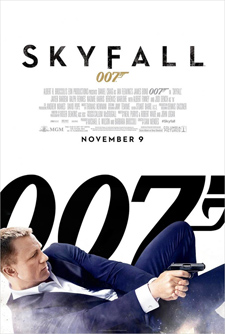 This movie is just so super cool. Ever since they rebooted James Bond with Daniel Craig in Casino Royale, two movies ago, it’s been about making Bond less a wisecracking superhero spy and more of a hard hitting, tight lipped, cynical assassin. Skyfall is the bridge between the sociopath and the ladies man. Watching all of the classic Bond puzzle pieces fall into place is nothing short of a delight and composer Thomas Newman threads little elements of the iconic Bond melody into the score until it finally bursts through in all its glory. Just awesome. Even as the sudden appearance of one of the more legendary Bond totems seemed like an unexplained logic leap, I absolutely didn’t care. I was just happy to sit in a movie theater and be a part of it. It’s nice to see Bond appreciate a shaken martini again and travel in style from rooftop pools in Shanghai to exotic casinos in Macau to deserted islands in location unknown.

Director Sam Mendes (American Beauty, Away We Go) is known for giving his cinematographers a lot of leeway, and Roger Deakins (The Shawshank Redemption, No Country for Old Men) did not waste any opportunity to make this picture gorgeous. One of the larger themes is whether there are enough shadows left in the world for a secret service to operate in when technology seems to have made all information accessible and every government operation transparent. That theme is heavily reflected in Deakins’ frames, from the first shot where Bond steps from the shadows into perfectly sculpted light. The darkness in this movie is absolutely exquisite. In fact, the coolest movie fistfight I’ve seen in years happens in one slow tracking shot with no cuts between two backlit silhouettes and involves small startling bursts of light from the muzzle flashes of a rifle. I can’t even… That’s just… Wow.

Now, there seems to be a controversial element here that people are making a lot of noise about, which I won’t say too much about, but I think people are just taking it wrong. The writers have simply found a new tact that no Bond villain has ever taken to try and get under Bond’s skin. And Bond just proves that even when tied to a chair he can be neither shaken nor stirred.

Caution to parents: Bond is very angry, very violent, back to bedding every woman he meets, and though every Bond film has plenty of explosions I think this is the first time they drop the F-bomb.

My personal opinion: I didn’t even know I cared about Bond’s backstory until they were already telling me. Then I loved it. The best reason to see this in IMAX has more to do with gorgeous helicopter shots of landscape than with action, but the opening action scene and title sequence, of course, also encourage paying the extra money. Bottom line, my favorite Bond picture.