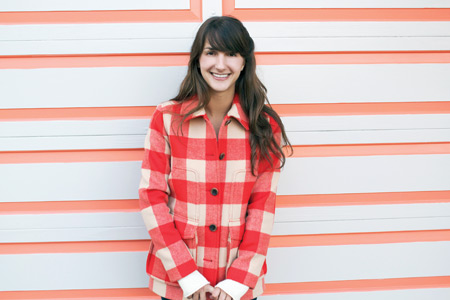 In December of 2011, Mia Christopher was deep into the final year of her BFA program at California College of the Arts, San Francisco, when she received an email from a buyer at Anthropologie inquiring about her interest in collaborating on a collection for their Made In Kind program. Mia was familiar with Made In Kind, the retailer’s limited-edition releases of clothes created with artists and designers, but wasn’t sure if the email was real or a prank. 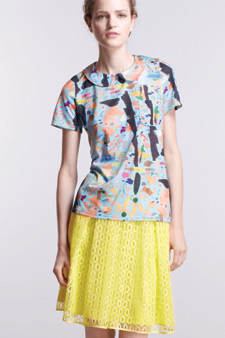 It turned out to be very real, and this June, one month after earning her degree with high honors, clothes adorned with her artwork landed in flagship Anthropologie stores in New York, Chicago, San Francisco, and other major cities.

In person, Mia is charming and energetic with a quiet grace and humble spirit that might leave you with the impression that her success is a matter of happenstance. Don’t be fooled. This young woman is incredibly hardworking.

Mia began taking classes at the School of the Art Institute of Chicago while she was still a student at Hinsdale Central High School. “That’s one great thing about Hinsdale, she says, “I would just walk to the station, take the train into the city, and walk to class at SAIC or spend time in the galleries of the Art Institute.”

She credits her parents, Barbara and Tom Christopher, with being very supportive of her endeavors, whether it was taking photography and painting at SAIC or coloring her hair blue. With their backing, Mia finished up high school in three-and-a-half years. Her first semester as a full-time SAIC student began that spring. 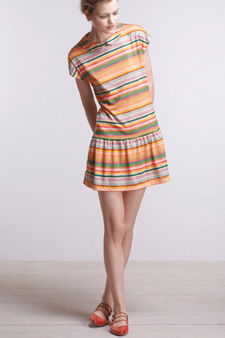 Mia sings the praises of Chicago as an inspiring place filled with artists and musicians, but found the winters less than motivating. “What good is it if an amazing band is playing or there is a great gallery opening if you have no desire to leave the house and go see it?”

The San Francisco Bay Area beckoned. Barbara, Tom, and Mia had moved around when she was young, but before settling in Hinsdale, the Bay Area had been home. Mia remembered it fondly and decided to take a break from her studies and move to Berkeley. “SAIC will hold your spot for up to five years, as long as your grades are good, so I knew I could come back here if California wasn’t how I remembered.”

Fast-forward a few years to find Mia immersed in the life of a successful art student circa 2011; earning good grades, securing solo exhibitions, participating in group exhibitions as far away as Beijing, hosting an Etsy shop and posting to Flickr.

Mia thinks it might have been an online posting that led the Anthropologie buyer to her. The trail might have begun with a friend’s blog post, or an image from her Flickr that someone used on Tumblr. 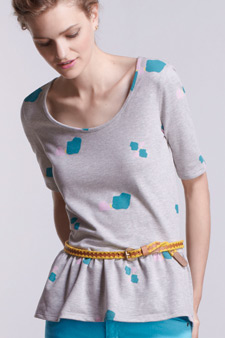 However it happened, she was open to the idea of a collaboration, and after a meeting with the buyer over coffee in L.A., she began an email correspondence with a production designer in Los Angeles and a large number of people in the company’s Philadelphia headquarters. “It was hundreds of emails,” Mia says. “Sometimes there would be 40 people included on the email. I really got a sense of how things work in a big company and how important it is to respond to people in a timely manner.”

The Anthropologie team was especially drawn to Mia’s “Test Sheet” series. These are small works on handmade Stonehenge Fawn Paper that she uses to test various materials—including colored pencil, paint, gouache, nail polish, and ink, to name a few—and then stashes away as a record of her artistic process.

“I might make a mark on a test sheet to clear away a little bit of another color that’s on a pen to keep whatever I’m working on how I want it to be. Or I might just be releasing energy.”

Over time, the test sheets become lovely works of abstract art and the Made In Kind team saw potential for them to become beautiful garments. Mia sent them a selection of works, and the whole group would weigh in with their feedback. Her prolific work habits served her well as she was often asked to send more pieces along the lines of specific selections.

Mia then worked with the production designer in Los Angeles, who was tasked with adapting the art so that it would repeat well when printed on fabric. She was also asked for her opinion on shapes, which were kept very simple. 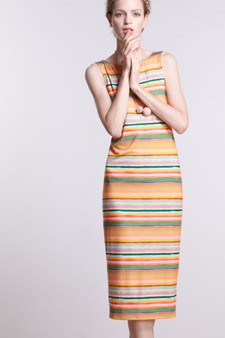 In the end, the collection included dresses derived from Mia’s painting Color Stack Spectrum, T-shirts, dresses, and a jumpsuit that evolved from various test sheets, plus peplum shirts and an infinitely wearable maxi dress.

“I have samples of everything, but I don’t really wear them,” says the very modest Mia, who isn’t one for launching into a humble brag about how she just happened to design a line of clothes for a favorite national retailer.

Currently, Mia has a solo exhibition at San Francisco’s famed Ritual Coffee Roasters and is exploring the juxtapositions of adolescence in her art.

She was also happy to be spending a few days back in Hinsdale with her mom, dad, and Yorkie named Toast. “It’s so nice here—the perfect place for a vacation.” 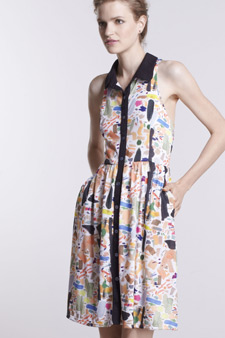 Made In Kind/Mia Christopher launched in June at Anthropologie stores, including 108 N. State Street in Chicago, and at anthropologie.com. Visit miachristopher.com to see Mia’s recent work and find links to the collection and her Etsy shop.