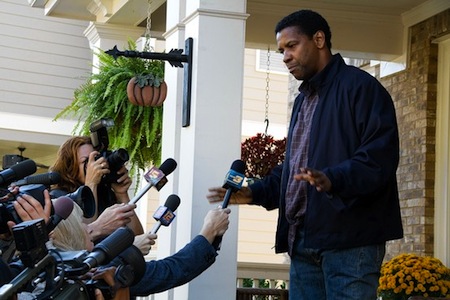 Robert Zemeckis, the director that brought us movies like Back to the Future and Forrest Gump, is back from a stint in strictly motion capture filmmaking to once again point a camera at real actors. For such an infamously visual filmmaker, Flight is a surprisingly low key, dialogue driven drama about alcoholism and addiction with a few Lifetime Original Movie’ish music cues thrown in for good measure and a startling suicide run in unsympathetic characterization by one of America’s most likable actors. It does, however, feature one of the most intense and amazing plane crash sequences I’ve ever seen.

When we first meet Captain Whip Whitaker (Denzel Washington, Unstoppable) he’s swearing at his ex-wife over the phone about paying for his son’s schooling while chain smoking as a flight attendant (Nadine Velazquez, My Name is Earl) walks around his hotel room nude, smoking marijuana. He then hops off the phone, downs some vodka, and snorts a line of cocaine. We will now spend another two hours following this man. He goes directly from the hotel to piloting a passenger plane that suffers catastrophic equipment failure. As everybody else panics, Whip pulls off the craziest stunt imaginable to emergency land the aircraft with minimal loss of life. The rest of the film follows Whip while he refuses to sober up with the help of his despicable dealer (John Goodman, Red State), much to the constant disappointment of his recovering heroine addict girlfriend (Kelly Reilly, Sherlock Holmes: Game of Shadows) and a defense lawyer (Don Cheadle, Iron Man 2) who’s trying to cover up a damning toxicology report from the day of the crash.

The first act of this picture is so riveting that it throws the pacing off for the rest of the film. The initial adrenaline burst brought on by the awe-inspiring plane wreck soon wears off and you realize that your protagonist is an alcoholic in deep denial and you have to watch him fail at accepting responsibility over and over again. It’s a tough ride. It needs to be, but it’s hard to sit through at a certain point.

I think it’s fitting for Zemeckis to publically battle his addiction to motion capture animation filmmaking (Polar Express, A Christmas Carol), where the actors performances are captured by computers and Zemeckis has unlimited access to impossible camera moves, by making a film about crippling addiction. I just picture Spielberg and Tom Hanks sitting him down one day for a mo-cap intervention and telling him that everything will be okay, Denzel Washington will help him through it.

Washington gives another outstanding performance. He was so good at being Whip that I forgot I ever considered him likable. In fact, aside from a lagging second act, the only other things I didn’t appreciate about the movie were some really odd, heavily scripted moments, like an overly long scene in a hospital stairwell with a chatty cancer patient about fate. There was also a rather unkind portrayal of devout Christians that seemed to brand them as naïve cultists.

My personal opinion: Parents beware. This picture is a very hard R in almost every category and the main character is a deeply flawed individual. As a big fan of both Zemeckis and Washington, I think Flight should be seen in the theaters, but brace for impact, because it’s a turbulent ride.