Based on a novel of the same name, Cloud Atlas is six stories in six different times—1850, 1931, 1975, 2012, 2144, and 106 winters after the fall of civilization. Each time has a very involving story of romance, the struggle for power, nefarious industrial schemes, the lasting influence of art, unlikely relationships, and/or brutal violence. 1850—a young businessman (Jim Sturgess, Across the Universe) tries to help a runaway slave (David Gyasi, Red Tails) while battling a rare disease, 1931—a young composer (Ben Whishaw, Bright Star) tries to get out from under the thumb of an aging maestro (Jim Broadbent, The Iron Lady), 1975—a courageous female journalist (Halle Berry, New Year’s Eve) tries to uncover a corporate conspiracy while being pursued by an assassin (Hugo Weaving, Captain America), 2012—a man tries to reunite with his lost love (Susan Saradon, The Big C) but gets trapped in a retirement home by his own brother (Hugh Grant, Love Actually), 2144—a cloned human (Doona Bae, The Host) must learn she is equal to natural born humans and inspire a revolution, after the fall—a tribesman (Tom Hanks, Larry Crowne) must learn to trust a foreigner who relies on technology and do battle with a tribe of cannibal warriors. Each story is directly influenced by writing, film, music, or theory that came from the story before showing how the work of one life can reach through time to touch another. There’s probably also something about soul mates and reincarnation going on here, but it’s not the interesting part. 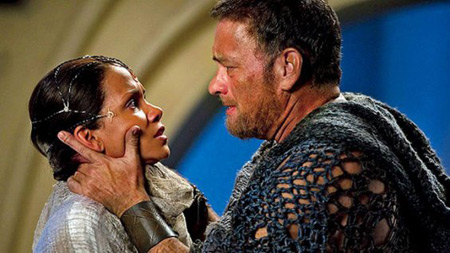 There’s clearly enough going on here without making things more complicated. The fact that Twyker and the Wachowskis manage to flesh out each of these stories, make them feel complete and considered, and manage to make the whole thing understandable while communicating their larger metaphors is a testament to their skills as storytellers. Twkyer took three of the stories, the Wachowskis the other three, and yet it feels like one whole story. As fragmented as the delivery is, it rarely feels jarring because of the switching between stories or ages. It’s jarring because they couldn’t leave well enough alone.

The jarring thing is that the actors are all plugged into each story as different characters with the help of a lot of makeup and theatrical voice alteration. They even go so far as to change the actor’s nationalities and genders. Presumably this technique should impress upon us that underneath the surface, a human is a human and should be treated as such. (As well as the fact that they have a very skilled team of makeup specialists and an extremely talented cast) Unfortunately, it sometimes has the opposite effect and it gets distracting. When you’re pushing a makeup team that hard, some things just aren’t going to be convincing. Particularly distracting are an Asian Hugo Weaving and a female Hugo Weaving. Tom Hanks is a wonderful actor but his cockney accent is as offensive to the ear as it is to Good Morning, America. And I don’t care how good a makeup job is, Hugh Grant will never ever EVER be convincing as a cannibal warrior. I can’t believe I actually got to type that sentence in earnest. Thank you Wachowskis.

The writing is outstanding and the visuals are top notch. These directors have always known how to point a camera. A few of the conventions—like an all too visible inner demon—do come off as ridiculous, though it’s surprisingly little given everything they’re up against. However, more sensitive viewers will be put off by the brutality of the violence and some of the sexuality.

My personal opinion: An interesting exercise and some very good storytelling. If any of this sounds interesting to you, the epic scope of this flick works beautifully on a massive screen. I do hope that next time they leave the cast swapping to off-Broadway theater troupes though.