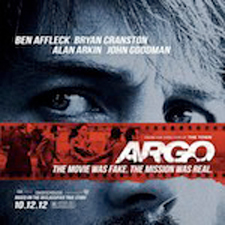 Ben Affleck is an outstanding filmmaker. Hollywood realized it after Gone, Baby, Gone and it was reaffirmed with the precisely paced, wonderfully performed The Town. Maybe Argo, his THIRD critically acclaimed feature film as a director, can finally make the general public stop thinking about him as Jennifer Lopez’s ex and smirking star of 90’s action spectacles.

Six Americans escape notice when the American consulate is seized during the Iranian revolution in 1979 and are sheltered in secret in the Canadian Ambassador’s home. While the American government and media are preoccupied with the 60 captured Americans being held hostage by the Iranians, the CIA tries to devise ways to extract the hidden six. CIA agent Tony Mendez (Affleck) ropes an Academy Award-winning make up artist (John Goodman, The Artist) and an established film producer (Alan Arkin, The Muppets) into helping him stage a fake science fiction film so he can pull the hidden Americans out as film personnel during a staged location scout in Iran. Everyone from his superior at the CIA (Bryan Cranston, Breaking Bad) to the hostages themselves knows this operation is a long shot, but they’re running out of time and people are getting hung in the streets. This is based on a true story, as backed up in the end credits with production stills running against pictures of their real life counterparts and a recorded statement from President Jimmy Carter.

Argo is intense. Anyone who saw either of Affleck’s last two movies will find the same expert balance of gripping tension, diverse character perspectives, and brief moments of welcome humor. He balances his documentary-feeling, grainy, high shutter speed, shaky cam, which gets the audience on the ground with the chanting protesters and soldiers, seamlessly with enough smooth dolly, crane, and tripod wides to allow us to step back enough to weigh things objectively and occasionally Hollywood-up the proceedings. 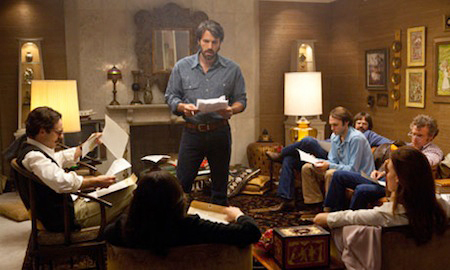 Everything sells the late-70s/early-80s time frame wonderfully, from the soundtrack to the mustaches, the cars to the collars; it’s like a window into the past. And every set and location they used to double Iran was fantastic. The handheld footage during the crowd scenes felt like it was pulled from the news cameras of the period. Plus, I have a soft spot for period movies that start with archival studio logos. The entire production team brought their A-game.

Same with the cast. A ton of familiar faces, all doing great work alongside one-scene characters who never speak a word of English, everyone on screen pulls you into their immediate fear, anger, and hope. It all feels authentic and it all feels like life and death.

My personal opinion: An exceptional thriller. One of my favorite movies I’ve seen all year. Back when Affleck was off Pearl Harbor’ing I always gave Matt Damon the lion’s share of the credit for the Good Will Hunting screenplay. But Affleck just refuses to stop proving how talented a storyteller he is. So, fine, I give in. Your move, Matt Damon. —Jake Jarvi