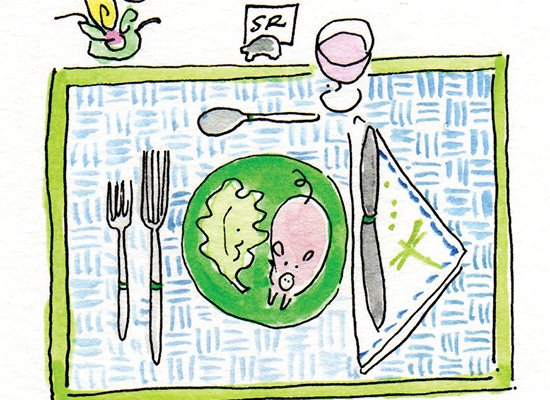 A few years ago, I was entertaining what I like to call “the grown-ups”—friends of my parents who, now that I am an adult myself, I not only have the privilege of calling by first name, but also feeding. As the guests arrived and made themselves at home with the soda siphon and the bowls of spiced nuts, one of the Female Grown-ups, or FGUs, picked up a hand-embroidered cocktail napkin (so cute—with little dragonflys picked out in contrasting stitch!) and said to me with the sweetest smile: “You know, if you’d brought these over to me earlier, I could have had my housekeeper iron them for you.”

And lo, on that night, my list of Dinner Party Rules was born. And on this night, I’m pleased to sit down at my humble desk here at Crooked Towers, and share a few of my meager tidbits with you, as we round the corner into fall and the upcoming social season. Stop me if you’ve heard them already…

I know a girl who will totally go through your medicine cabinets if you show her to a bathroom that has them. (She may also swipe any interesting-looking meds that are in there, too, but that’s another story.) This behavior is Not Nice. Nor is poking around in any rooms that have their doors firmly closed—this is dinner party code for Keep Out, and you really, really should—who knows what, or who, you might find behind them?

And while we’re on the subject…I’m sure you already know this, but a recent guest chez moi clearly didn’t: It’s tacky to flip the china over to check the stamp and provenance—if you think you’ve spotted the same much-beloved and now-impossible-to-find pattern your grandmother willed to your ungrateful second cousin who sold it all, just ask about it. Otherwise your hostess, spotting you pricing up the inventory, may feel judged, which will make her feel hostile.

And, while we’re at it, upgrading your placement is a no-no, too. (This rule, however, gets negged if you spot a Beautiful Single Man and get the all-clear to make the switch from your hostess, who probably invited him for just this reason, anyway.) But then, I’m not a huge lover of formal placement anyway—that whole look-to-the-left, 1,2,3 switch, look-to-the-right thing really should be relegated to the past, along with sandal-toed hose and the Betamax. Besides which, with the rise of social networking, it’s a rare bird indeed who goes into a dinner party—even one filled with strangers—blind. Most guests have already done most of the getting-to-know-you by Face-stalking or Twitter, which makes the need for the first hour to be spent in small talk fairly obsolete. So let the chips, and the guests, fall where they may (so that’s what was in that closed room!) and use your time together for what’s it’s there for…catching up with old friends, and maybe even making a new one.

Don’t Be a Bully

One thing that really wears me out is the Hospitality Bully. You know the type: the red-faced host who won’t accept no for an answer, who spends his evenings alternately pressing cocktails on his guests, and insisting that everyone Eat! Drink! Be Merry! Nothing kills a party faster than forced festivating—and, not only is it bad manners to make people eat or drink more than they want to, it can be downright dangerous to turn well-oiled guests onto the roads where they might do life-changing damage to themselves or to someone else.

Further, as someone who has spent more years than I care to recount on a series of restrictive diets, I can attest that willpower is a fleeting thing, and it can become more and more difficult to say “no” when one tray after another of piping-hot pieces of little food on sticks are continuously waved under my nose. Which means that I will eventually succumb (if for no other reason than to make you go away), which means that I will feel like a failure, which means that, on at least one level, I will blame you. And no one wants that.

While we’re on the subject, people need to stop pushing drinks at people who say no the first time. It’s a fair bet that anyone who turns down a cocktail at a cocktail party is doing so for a reason, which should be respected—either they don’t like it, or they used to like it way too much, or they’re driving, or any other of a million valid explanations, all of which are none of your business. Offer a soft drink (sparkling water is often the tipple of choice for the non-drinking crowd) and let it go.

Ask for What You Need

Often, as guests, we are afraid to ask our host for anything, out of fear of embarrassing her and making her feel less-than. But if, say, she forgot to put out the salt cellars (or, even better, those charming salt bowls with mother-of-pearl-handled spoons), then you can absolutely believe that she’s going to realize it at some point—probably the next morning when the hardcore clean-up crew arrives and asks what she wants them to do with the four sets of filled salt-and-peppers sitting in the butler’s pantry. And at that moment, she is going to feel terrible. Much like when you get home and spot a lovely piece of spinach in your teeth which you can easily backdate to a good five hours and six social encounters ago, and wonder why on Earth no one said anything about it, she’ll wonder why no one asked for the salt. Was the food too salty as it was? Was it inedible? Was it—God, the horrors—unidentifiable?

You don’t want to be responsible for these feelings, any more than you want to eat bland penne á la vodka—so don’t be afraid to ask. Same goes for napkins (of course she has them—are you eating in a barn?), cutlery (miscounts happen), or side-or-salad plates. In general, if your place is lacking in some dinner basic, it is perfectly acceptable to request it. No hard feelings. Just don’t spend the dinner snarking, sotto voce, about it. It’s really not a big deal, and it’s certainly not personal.

Eat What’s on Your Plate

The time for announcing that you’re a vegan, or fruitarian—or as one friend decided to be, a pesce-bacotarian, meaning that the only meat she would eat was either fish or bacon—is either when you accept the invitation, or never. No fair sitting down to an intimate little dinner for eight and suddenly coming over all faint at the lump of protein in front of you. This is Bad Manners and completely socially unacceptable.

That said, it is important to let your hostess know of any major problems with which she may not be familiar: Maybe you’re allergic to all nuts besides peanuts, as is a friend’s husband—I have a terrible time remembering this and almost always get it wrong the first time. I’m equipped for “no peanuts,” being the mother of a grade-schooler, but one of my favorite salads features toasted walnuts and I always had to do a double-think about it until I put a Post-it on my cabinet that read, “A peanut is not a nut,” which helped, in a Beckettian sort of way. Also, hostesses should always, always provide at least a few truly tasty vegetarian options—not just grilled portobellos, please—and it’s a good idea to offer something that’s dairy-free. I’ve included one of my favorite veggie sides here—if you’re having vegans to dinner, just ditch the cheese and use vegetable broth. And, if all that doesn’t work, major in bread rolls, hide the pork under a lettuce leaf, and move on.