Robert Miller (Richard Gere, Chicago) runs a very successful financial trading company, which has weathered a financial crisis very successfully…on paper. The truth is that if he can’t sell his company with enough profit to cover a 400 million dollar loss in the next few days, he will lose everything he’s spent his life building. On top of that, his wife (Susan Saradon, The Lovely Bones) won’t stop talking about a two million dollar donation to charity, his daughter (Brit Marling, Another Earth) won’t stop looking into the company’s financial records, a situation with his mistress (Laetitia Casta, War of the Buttons) keeps threatening to expose him, and a detective (Tim Roth, Lie To Me) is determined to prove his guilt. Like the song says “Mo’ Money, Mo Problems,” Mr. Gere.

This thing is more a morality play than it is escapist entertainment. Fortunately, despite being centered around a thoroughly unlikable protagonist, once all the pieces are in motion, it’s spellbinding. It’s actually a credit to Gere that as Robert Miller stacks unconscionable choices on top of reprehensible behavior, I sometimes found myself justifying his decisions as noble. Now, that’s a movie star. There’s a degree of Oscar buzz going around, but that’s pretty par for the course when an established actor decides to play against type. For guys like Gere, that means trading the white limo for a black one and smiling without teeth. He’s great in the role, but I don’t think it’s flashy enough to pull Best Actor. His most daring decision was saying yes to playing a bad guy after a couple years away from acting. He’s still a clever enough and rich enough bad guy to be the envy of the average joes sitting in the audience and have sex scenes with women a third his age. Sounds kind of like Gere’s good guys do. 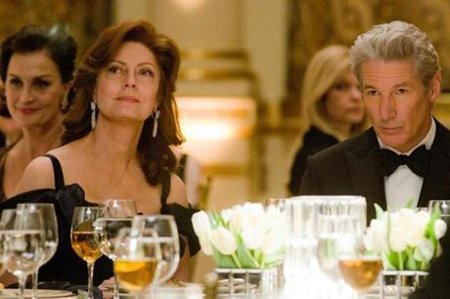 The real trick this movie pulls is in the tight screenwriting. Every character has distinct and clear motivations pulling the story in every direction. It’s complex, it’s dense, and it expects you to keep up. After a slow first act, this flick beautifully juggles a wide cast of characters and a series of intersecting plots. Supporting roles are really fleshed out and filled with wonderful actors. Tim Roth is fantastic as the clever cop we’ve seen him play before. Nate Parker (Red Tails) is outstanding as a blue collar kid caught in the crossfire. And it’s fun to see Vanity Fair’s Graydon Carter make an appearance as another billionaire that Miller has to face off against.

My personal opinion: A really fun night out for the grownups. It’ll invite conversation if not a little controversy. Really well accomplished by everyone involved.