Fresh off the plane from spending the summer in Los Angeles auditioning for parts and promoting her newest movie, Tyler Perry’s Madea’s Witness Protection, one might think Danielle Campbell would rather be curled up under the covers battling her cold, than sitting in a make-up chair. But, as the mark of a true professional, Danielle graciously forges on.

It wasn’t that long ago that Danielle was just a 10-year-old in Hinsdale. Yet on one fortuitous day, while Danielle was having her hair cut in a Chicago salon, a talent scout approached her about taking a meeting with a Hollywood agent.

“It all happened really fast,” Danielle cheerfully remembers. “My mom and I met with the agent and we really liked what she had to say. The next thing I knew, I was being asked to audition for different parts—it was crazy.” Soon, Danielle landed her first role as a guest star in the TV series Prison Break in 2006. And a few years later, with many more roles in between, Disney Channel came calling and cast Danielle in their original movie StarStruck. This led to her big screen debut as Simone Daniels in the movie Prom. 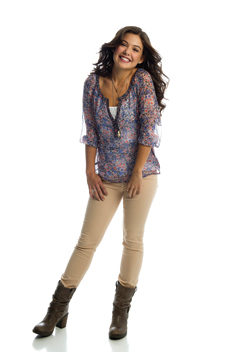 Danielle seems almost fearless when she talks about the audition process. “I know that I’m not going to get every part that I try out for,” she says, shrugging her shoulders at the fact that rejections do happen. “But sometimes it’s just getting in front of that right director—you never know where that might take you.”

Danielle’s confidence is heavily rooted in the cheering section of her family. The opposite of the cliché stage mother, Georganne, Danielle’s mother, is careful to guide her daughter but not push her. “Someone along the way gave me some really good advice,” says Georganne, in response to a question about the importance of an acting coach. “They said to trust Danielle’s instincts. They’re genuine and will serve her well,” she says.

Georganne and her husband John, both real estate fund managers, juggle their personal career demands, Danielle’s Hollywood aspirations, and the busy life of their musically inclined 16-year-old son Johnny. “We all have to work together to make this happen,” explains Georganne, “but it does all work. And it doesn’t hurt that Danielle and Johnny are best friends and support each other.”

This brotherly love may have had some influence on the roles that Danielle hopes to play, singling Emma Stone out as her favorite modern-day actress. “Someday I really want to be in an action film,” she says. “I love action movies. My brother and I are obsessed with them. Like Fast & Furious, those car movies, that would be amazing.”

Just a few months shy of her 18th birthday, the parts Danielle auditions for are somewhat limited at this stage in her career. Because she’s a minor, studios are regulated in the number of hours they can have Danielle on set. They’re also required to provide a tutor and to pay for a guardian to be with her. “Things will hopefully change for me next year when studios don’t have to worry about my age,” Danielle adds.

College is also on the horizon as Danielle completes her senior year. She and her mother visited a number of academic institutions in and around Los Angeles this past summer. “We have a lot to think about,” says Georganne. “Managing college and an acting career will be really challenging, but lots of actors do it—I’m sure Danielle can, too.” 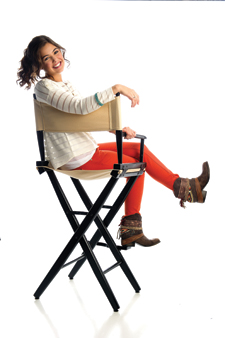 One thing is certain—however, the Campbell homebase will remain in Hinsdale. “I love that I can be in California during the summer, or next year for college, and then come home. We really do grow up differently here than the kids in L.A., which feels somewhat faster-paced, image-conscious, and fleeting. Many L.A. kids I have met have parents who are in the industry—whether actors or designers or authors. When you don’t have that industry focus, I think perhaps you’re more down to earth.”

When I’m home,” Danielle adds, “I’m really home. No one pays much attention to the acting thing. Every now and then a little girl might recognize me—and that makes me super happy—but for the most part when I’m in Hinsdale, acting is just something I do on the side. My life is very normal—I love it.”