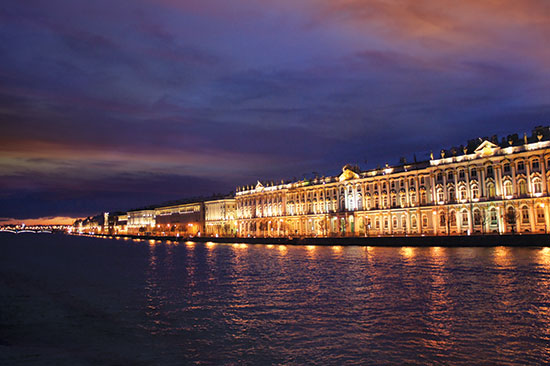 After brushing off years of Soviet neglect, Saint Petersburg is a world-class city once again.

I arrive a bit bleary-eyed not really knowing what time it is. The bright, blue sky beguiles me into thinking it is still daytime. It is not. So this is what the phenomenon known as White Nights is all about. It’s 10 p.m., and yet completely light outside. It isn’t until about midnight that the sky turns ablaze with reds and oranges, and the sun melts ever so slowly back beyond the horizon. Because of how far north Saint Petersburg is, the sun barely sets all summer long. As a result, everyone comes out to play, and there’s a palpable energy in the air.

It’s been a little more than two decades since the walls were torn down and the steely iron curtain of communism fell. Saint Petersburg (or you may remember it as Leningrad) has seen tremendous change since that time. The “Venice of the North” has come a long way from post-communist neglect to what is easily one of Europe’s most beautiful cities. But it’s what hasn’t changed that is most remarkable about this city. Saint Petersburg’s historical network of romantic canals, glittering onion domes, fabulous pastel-colored palaces, and ornate baroque architecture give the city a grand European flavor.

In fact, I soon realize that this “second city” of Russia has more in common with Chicago than meets the eye. It is the second largest city in Russia after Moscow, and home to about four million people. It is also the birthplace of the current president, Vladimir Putin, although the similarities between our two leaders may end there. Just as Chicago has gained more worldwide attention basking in the spotlight of its hometown president, Saint Petersburg has become a showcase for the “new Russia,” hosting summits and getting facelifts to its infrastructure. And it is a city built on and around the Neva River, which is spanned by 300 bridges. Unlike Chicago, these bridges are raised every night during the summer in a spectacle that many come out to witness.

This former Russian capital was taken from a swampy backwater to world-class city built by Peter the Great. He took his inspiration from the architecture of Paris, Vienna, and London. Over the last decade, this city, known for its revolutions, has had a new kind of uprising—the more trendy kind with hip hotels and restaurants opening up every week.

I established my home base at the trendy, year-old W St. Petersburg Hotel, the first of its kind in all of Eastern Europe and the first luxury designer hotel in the city. It may forever change the hotel landscape in Russia with its 137 modern, white-on-white guest rooms with floor-to-ceiling windows, and, my favorite, the white, ultra-fluffy, cloud-of-a-bed. Already popular with locals is the signature restaurant, by Michelin three-star chef Alain Ducasse, and a wood cabana-style rooftop bar, perfect for enjoying the warm summer months and white nights.

If you’re looking for a more traditional hotel, fit for a czar, with a little less flash and more grandeur, look no further than the Grand Hotel Europe. And, set to open next year, right across the street from the W Hotel, is the five-star Four Seasons, housed in the Lion Palace, making it possibly the city’s most luxurious “world-class” hotel. 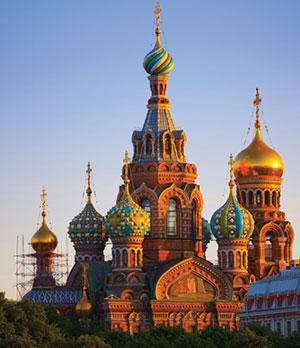 The State Hermitage Museum rivals the Louvre as the world’s best and largest art museum. This mint-green jewel box is housed in the over-the-top Winter Palace with room after room of masterpieces, from Monet to Matisse to van Gogh. I was just as impressed with the art collection as I was with the ornate building itself, dripping with gold leaf and opulence.

Nevsky Prospekt is Saint  Petersburg’s “Michigan Avenue.” This is the city’s famous major commercial thoroughfare and a great place for architecture buffs and people watching. Browse at the Dom Knigi bookstore, housed in the former headquarters of the Singer

Sewing Machine Company, or the one block long Gostiny Dvor, the famous 18th century department store, or shop at some boutiques (from Western names like Zegna to famous Russian designer Tatiana Parfenova). Then check out the imposing Kazan Cathedral and take a boat ride on one of the canals it crosses.

Take another ride on the engineering marvel of the Saint Petersburg Metro. Not only is it probably the most efficient metro I’ve ever taken, it is one of the most beautiful and elegant metros in the world. Many stations are adorned with columns,
chandeliers, and artwork. Adding another superlative to the list, it is also one of the world’s deepest—the stop near the W Hotel being the deepest in the entire system at nearly 350 feet below ground.

Church of the Savior on Spilled Blood is a confection of a church looking like something out of a Candy Land fairy tale. It was built on the site where Tsar Alexander II was assassinated and was dedicated in his memory.

Climbing up the 250 steps to the colonnade of the dome of St. Isaac’s Cathedral for 360-degree views of the canal-filled city is a must.

Finish off your day at the Mariinsky Theatre, home to what is arguably the best ballet company in the world, the Mariinsky Ballet (formerly known as the Kirov Ballet, its Soviet name). In a city mad for theater, ballet, opera, and music, there’s something going on almost every night.

When you think Russia, great food might not be the first thing that comes to mind, but those days are over. Saint Petersburg has upped its game to offer lots of international fare, many options for vegetarians, and tasty local dishes. Much of the food took me on a nostalgic trip down memory lane, reminding me of the dishes my grandparents ate, from herring and borscht (beet soup) to smoked salmon and kasha (buckwheat).

For a tasty lunch, try Zoom Café. There are a number of fresh fruit juices, soups, and salads at this below street-level, homey, multi-roomed café.

Just around the corner from the W Hotel and St. Isaac’s Cathedral, Teplo, a cute courtyard café, has an extensive menu of soups, salads, and main dishes. I devoured the potato pancakes topped with Danish creamed cheese, caviar, and melt-in-your mouth smoked salmon.

Part of the Ginza Restaurant Group (which has opened outposts in New York, London, and, soon, Los Angeles), Mari Vanna strives to take you back to Soviet times. The décor purposely makes you feel like you are eating in someone’s home, right down to the fact that you have to ring a doorbell to be welcomed in. It is a slightly kitschy affair, with tasty homemade food.

For a bit of rooftop glamour, another Ginza restaurant is making waves with the trendy set of Saint Petersburg. At Terrassa, you will enjoy fusion food from the open kitchen while enjoying the great views toward Kazan Cathedral just off Nevsky Prospekt.