Italian physician and educator Maria Montessori believed that, “If you free the child’s potential, you will transform him into the world.” Every child’s inner potential should have the chance to shine. Children’s Montessori Language Academy, located in The Community House in Hinsdale, applies the theories and teaching processes of Montessori practice to its own unique curriculum to create a hands-on and highly social learning environment.

The school opened its doors in 2000 with a staff of highly qualified teachers, with more than 30 years of combined experience, all certified by the American Montessori Society. One teacher, Miss Mona, speaks seven languages fluently. Miss Pat, who teaches the birth to 3-year-olds class, teaches sign language to accompany the songs children learn.

Children’s Montessori Language Academy offers curriculum for three different age groups: birth to 3-year-olds (with their parents), toddlers (2- and 3-year-olds without their parents), and 3- to 6-year-olds. The Montessori setting puts an emphasis on independence, a sense of community, and value of each child’s natural psychological development in society. It places great importance on adhering to and facilitating the innate characteristics and tendencies in human beings, such as self-preservation, order, and communication.

“It is a big misconception that Montessori lets the children do whatever they want,” says Rosalinda Turner, Executive Director since the school’s founding. “But there are rules. Children are allowed to take one work at a time, and they must put it away where they found it neatly, while being respectful to the materials and the other children and teachers.” 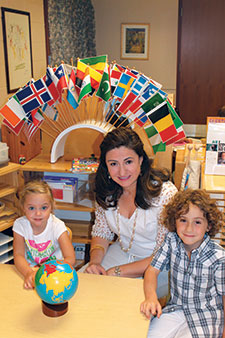 A typical half-day class starts with an uninterrupted block of independent classroom work, followed by music and singing, and then a communal snack before heading home. The snack is a perfect example of how Rosalinda and the other teachers highlight the crucial aspect of community in the curriculum. The daily snack is prepared by the children for the children. Classmates help each other spread cream cheese on bagels or cut up apples so they can enjoy the food and communicate as a group. “It is sometimes difficult for families to share a meal together, so we try to make up for it in the classroom,” explains Rosalinda.

One of the key differences between Montessori and a traditional preschool or kindergarten is that Montessori meets the individual needs of each student rather than having the students fit the mold of the school. Rosalinda gives us
a concrete example of how she and her staff cater and adjust to each child’s personal interests and experiences. A student returned to school after visiting his cousins in Texas. To relate the lesson for that day to his recent experience, one of the teachers helped him find Texas on the globe and then on a flat map to see its relation to Illinois and surrounding states. They went on to discuss the food, plants, language, and animals specific to Texas. By incorporating the student’s life into the lesson, the work and learning is matched to the specific social development of the child instead of following an inflexible unit-driven curriculum.

The language component of Children’s Montessori Language Academy is what sets it apart from traditional Montessori programs. Spanish is taught in the toddler classrooms, while the students in the 3- to 6-year-old community have the option to be fully immersed in a second language. The Spanish immersion program takes place for two hours after the normal half-day period during lunchtime. The teachers use active tools like music and movement to practice and celebrate the grace of another culture as well as peace and diversity through creativity.

Not only do the children have the opportunity to learn a non-native language, the Montessori students already come from varying backgrounds of ethnicity, race, and religion to create an encouraging and diverse educational atmosphere; English, Spanish, Greek, and Arabic are the various languages that can be heard among classmates and teachers.

Children’s Montessori Language Academy’s complete curriculum incorporates art, heritage, music, and language of another culture to make it an educational experience for preschoolers unlike any other in the area. Enrollment is still open for fall classes, which begin the last week of August.

For more information, stop by Children’s Montessori Language Academy on the second floor of The Community House at 415 West Eighth Street in Hinsdale, or call 630-468-5089.