Today, Hinsdale’s signature outdoor family event, Uniquely Thursdays, attracts more than 500 attendees every Thursday for 10 weeks in the summer. Uniquely Thursdays came about in response to a Hinsdale Chamber of Commerce survey in which community members expressed their desire for more local entertainment.

“Its strength is that we really focus on it being a family event, from tiny babies through grandparents,” says Jan Anderson, Executive Director of the Chamber. 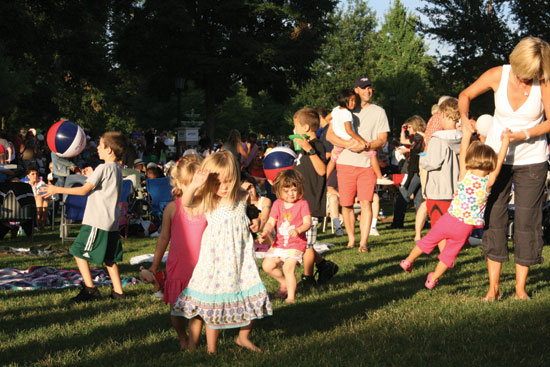 In the beginning, the Chamber sold beer and wine and provided entertainment. A few local eateries brought in food to sell. As the event gained popularity, it outgrew its space on First Street, moving to Burlington Park. Uniquely Thursdays is now supported by a number of local business sponsors, including Ettleson Auto Group, Hinsdale Bank & Trust, and the Village of Hinsdale. Local vendors provide  a variety of food, and Chamber businesses offer weekly activities for kids and families such as face painting, balloons, and raffles. Dubbed “The Popcorn Man” in the early days, John Karstrand still brings out his popcorn machine every week. The cornerstone of the event continues to be the local bands that provide entertainment. 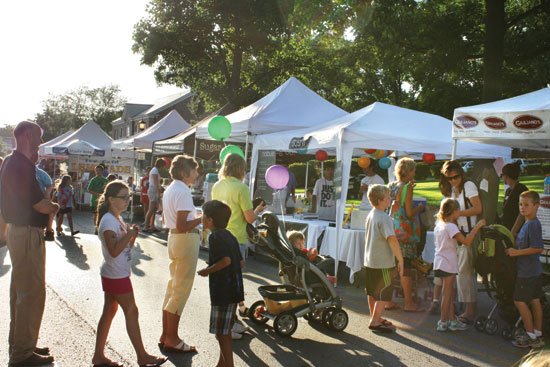 Paparockzzi will kick off the 10th anniversary of Uniquely Thursdays on June 14. On a damp May evening, Hinsdale Living caught up with the band as they rehearsed over the garage in Chris Catalano’s coach house.

“But some of us didn’t believe we had the time,” says Jim. “Chris Catalano was in Seattle, and he called every one of us to convince us to give the band a try.”

That Halloween, Tracy Isselhardt of McGrath Lexus was planning a fundraiser and asked the band to play. Their first gig was a huge success with more than 350 people in attendance—all in costume, including the band, and all dancing. Paparockzzi hasn’t looked back. After considering a couple of band names, including Recycled Souls and Midlife, the guys agreed that Paparockzzi sums them  up best.

All dads with day jobs, wives, and homes in Hinsdale, each brings his unique history, experience, and rock idol dreams to the band they say plays “everything from Johnny Cash to The Clash”—classic rock and roll, danceable ’60s, ’70s, and ’80s, and whatever else strikes their fancy. Their goal is simple—to make music and have fun. It’s clear that they do. Meet the band:

Chris “Barney” Barnard (described as the baby of the group at 40) on bass guitar is a financial planner with UBS. He describes his musical taste as more alternative—bands like Coldplay, Cracker, Big Head Todd, and the Monsters. The only music he won’t play: Bon Jovi.

Chris Catalano (48) on keyboards and vocals is CEO of School of Rock. Born and raised in Philadelphia, Chris fell for Jersey rock “with some horns in it” while roaming clubs like The Stone Pony on the Jersey Shore in hopes of a Bruce Springsteen sighting. “My musical muse was/is Bruce,” he says. Other ’70s rock icons include Led Zeppelin, The Rolling Stones, and  Elton John.

Jim “Jimmy” Conway (49) on guitar and vocals is in mergers and acquisitions and owns the title of “British rocker” in the group. His rock icons include The Beatles, The Rolling Stones, ’70s Top 40 pop, and, later, Tom Petty.

Ken Lawson (43) on guitar, keyboards, and some sax is a FOX TV executive who got his start in the USC Marching Band. “It’s a contradiction, but it works,” he laughs. His rock icon, bar none, is Eddie Van Halen.

Jim Nalepa (55) on vocals owns an executive search firm, grew up singing in musical comedy and musical classics, and was a soloist with West Point Glee Club. His rock icons, The Beach Boys, changed all of that for Jim. “It was a big transition from singing traditionally to singing rock and roll,” he says.

“Big Al” Wooldridge (52) on drums is a bond trader by day and owns Rock Academy. Al credits his musical heritage to being born three days after the legendary Buddy Holly died in a plane crash after performing at the Surf Ballroom in Clear Lake, Iowa—only a block away from where Al’s family lived. His rock icons are Keith Moon and Mick Fleetwood.

All the guys in the band agree that they couldn’t do this without the love and support of their beautiful wives, children, families, neighbors, and friends. Don’t miss the 10th anniversary kickoff of Uniquely Thursdays with Paparockzzi on June 14, from 6–9 p.m., in Burlington Park.