While it has long been customary to grouse about Florence, with its crush of tourists, navigating those crowds is a price all but a Philistine would gladly pay to catch a glimpse of da Vinci’s Annunciation, Michelangelo’s David, and Botticelli’s Primavera. As for the countryside, here as anywhere, you will find those—natives and seasoned travelers alike—who will tell you Tuscany is not what it once was. Perhaps not. But the light striking across the fields is the same, and the sight of small hilltop towns, mute in the distance, still make one’s mind wander in wonder of centuries past, when change came slowly.

Although the art treasures of Florence, the medieval towers of San Gimignano, and the daring and pageantry of Siena’s Palio are often the highlights of a Tuscan sojourn, for many visitors, the most memorable experience is a stay in the countryside, settling in to a tile-topped locanda and savoring la dolce vita. And one would be hard-pressed to find a more ideal spot to rusticate in high style than Borgo Santo Pietro, a 15-room property in the Val di Merse region, 35 minutes southwest of Siena. In the 13th century, the site was a way station for pilgrims en route to Rome. In fact, the path the pious took runs through the hotel grounds and across the wheat fields beyond to the remains of the Abbey of San Galgano, begun in 1218. When Londoners Jeanette and Claus Gron Thottrup bought Borgo Santo Pietro in 2001, the main house was a shambles; sheep and pigs had trod the land into a muddy mess. It took faith to imagine quality accommodations rising from such ruins. But, in 2008, the couple welcomed their first guests, and this still lesser-known corner of Tuscany found itself blessed with a retreat that even an ascetic would have to admit is heavenly.

Constituted as a country estate, the 33-acre Borgo Santo Pietro slowly reveals itself as one passes through formal gates and proceeds along the cypress- and lavender-lined drive to the main house, whose unpretentious stone façade rises above manicured grounds. (Eleanore, the chestnut-colored Shar Pei, forever snoozing out front, may raise her head in dubious interest as you step from the car, your feet crunching on the gravel). The air—tinged with the scent of burning wood if the weather is cool and the fireplaces are stoked—is immediately tonic. That’s the rub. Everything about Borgo Santo Pietro is restorative. Taking breakfast on the covered terrace (old-fashioned wicker chaises longues lined up on the grass below, like something out of Death in Venice), you spy birds flying against the distant hills. And, somehow, they register differently, because they are not your birds and those are not your hills.

The singularly styled villa and three garden cottages combine rustic Italian architectural motifs with a pan-European chic, a look that references English manors, French chateaux, and a hip Berlin hotel. Thanks to its essentially domestic scale and a staff that excels in unobtrusive attentiveness, a stay here registers like a house party, as people come and go, meals seem to appear whenever you wish, and the offer of a glass of wine is never far off. The hotel aims at self-sufficiency, keeping bees, maintaining an orchard, and tending biodynamic vegetable and herb gardens. And what is not produced on-site is sourced locally, from cheese (the sheep live right down the road) to the wine.

The open kitchen, with its great sideboard and cabinets filled with silver and crystal, is the heart of the house, shifting from breakfast room to rendezvous, as individuals come together to plan an outing or head off to the pool or tennis court. Staff can arrange transportation and guided tours to local villages, Siena, Florence, or the wine districts of Chianti or Montalcino. On property, devoted sommelier Mirko Favalli offers engaging wine tastings in which he urges guests to lead the conversation by offering their impressions, rather than sit back and let him do all the talking. And Executive Chef Richard Gynn welcomes guests to his private kitchen for a lesson in making ravioli—rolling out the golden dough, filling it with chard and ricotta, then sautéing it unabashedly in butter, adding a roughly smashed clove of garlic and some sage. And no stay would be complete without a visit to the spa, housed in the 800-year-old bakery, whose oven provided nourishment to those pilgrims long ago. 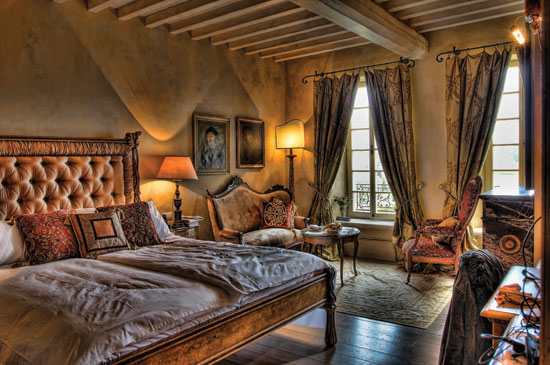 Whether you head off to golf (yes, Tuscany is not what it used to be) or make a jaunt to the beaches of Follonica, returning to Borgo Santo Pietro will be like coming home. In the evening, the house is candlelit—a huge candelabra flickering in the entry hall, the dining room and terrace aglow. After dinner (with Beetroot Tagliolini to start and an entrée of Bistecca alla Fiorentina, perhaps), you’ll want to linger over a cognac in the salon, or step outside and sit in the garden where water from the fountain flows past in channels at your feet.

For all it offers (and one should take advantage of all it offers), a great pleasure to be had at Borgo Santo Pietro is something so simple it may seem silly. Grab a pair of hiking boots from the front desk and follow the rough clay road that skirts the property, cutting through the wheat fields toward the Merse River. As you head for the water, take a moment to stand still. Surveying the landscape, you’ll spot Chiusdino, a humble town of 2,000 inhabitants, the birthplace of St. Galgano who inspired the founding of the abbey nearby. Early in the season, the farmers may be out with their equipment, and, in the fall, you’ll hear gunshots as rabbit and wild boar are hunted in the surrounding forests. But generally, you’ll hear nothing. Which is nothing short of astounding when you come to think of it.
Il silenzio è d’oro.

Accessible from Florence, Pisa, or Siena, Borgo Santo Pietro is open April through October. Rates (breakfast and tax included) are €335 to €1,760 per night. The entire villa can booked for weekends or weekly stays.