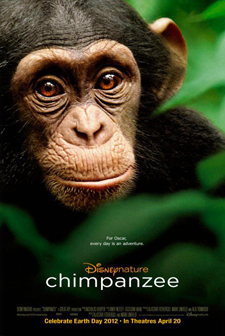 The talent behind the gorgeous BBC documentary series The Blue Planet and Planet Earth are the folks behind Chimpanzee. The cavorting of the animals and the simplicity of the narration are what make this a kids’ movie, but adults won’t be disappointed here either. The photography is astounding, the animals are adorable, and the story—although parts of it feel manipulated—is very touching.

The main baby chimpanzee, Oscar, is unbelievably cute when he’s just sitting still looking around, so imagine the impact of him wrestling with the other little chimps and trying to figure out how to use rocks to break open nuts. We’re talking ridiculous cute factor. There are two sides to Chimpanzee: The documentary side, in which we simply observe the habits of a group of chimpanzees as they look for food, groom each other, and there’s even a sequence in which they successfully hunt for monkeys to eat (though nothing graphic is shown). Then there’s the “story” side, which Tim Allen (voice of Buzz Lightyear in the Toy Story franchise) narrates as a rival group of chimpanzees competes against our protagonists for food and land rights, a very “good guys” versus “bad guys” idea and the main influence felt by the Disney side of the Disneynature umbrella under which this film was released.

The main conflict for little Oscar is the loss of his mother, due either to an attack of the rival group or a visit in the night by a jungle leopard, the documentarians never actually commit to what happened to her, but they make Oscar’s plight very plain. The second act is terribly sad as Oscar looks for a new mom in the group only to be pushed away and ostracized. Fortunately, he’s soon taken in by the male leader of the chimpanzee group, in a really touching turn of events that shocked even the team that was making the doc. Then the final battle between the good chimps and the bad chimps quickly plays out to give the story a feeling of resolution.

The film even lets Tim Allen wink at his Home Improvement days, referring to the bigger rocks the chimpanzees are using as “power tools” and doing his Tim “The Tool Man” Taylor grunt.

The adorable chimpanzees are the headliners here, but the cinematography of Chimpanzee is absolutely awe-inspiring. Anyone who has seen any of their previous efforts is familiar with the dazzling cinematic quality of their work. In between the chimpanzee dramas, the audience is presented with sweeping aerial shots of the jungle canopy and waterfalls, perfectly smooth tracking shots of plants and fungus growing in rapid time lapse shots, and stunning high speed photography of drops of water causing forest pods to explode that had to be shot at 2,000 frames-per-second with the Phantom camera system. There’s an mind-boggling sequence of mushrooms that glow during the night and a tracking time lapse shot that shows the glow in them dwindling as day dawns. Absolutely incredible.

My personal opinion: Nice to go to the theater to see a movie about animals that don’t talk. Beautiful filmmaking and an effectively maneuvered storyline make this a great time at the movies, and the perfect choice for Earth Day this weekend.