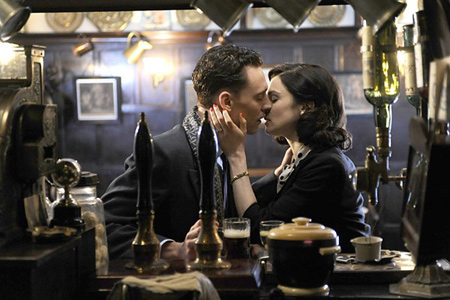 Based on a play, The Deep Blue Sea is predictably at it’s best when two people sit in a room and talk. The middle half hour is a really interesting character piece that works beautifully, unfortunately the beginning and the end stretch interminably, feeling more like a nine hour mini-series studying snails-paced camera moves, melodramatic violin, and the elegance of backlit cigarette smoke.

In post WWII London, Hester (Rachel Weisz, The Whistleblower) walks out on her passionless marriage to William, a wealthy judge (Simon Russell Beale, My Week With Marilyn), to take up with a vivacious and handsome ex-war pilot named Freddie (Tom Hiddleston, Midnight in Paris), who, though poor and uncultured, gives her the kind of romance of which she has always dreamed. As their affair turns into reality, she realizes that his passion for having fun trumps his passion for her. She tries to balance his lust for life with culture and domestication, but he resents her for her constant hovering. William returns to prove that he loves her in spite of everything, but she’s determined that a life without Freddie would be pointless.

The film announces whose side we’re supposed to take when Hester’s painfully clichéd, proper-yet-cruel, British mother-in-law announces, “Beware of passion, Hester, it always leads to something ugly. A guuuuaaaarded enthusiasm is much safer.” But then the rest of the movie makes living for passion look like the longest game of Russian roulette ever. Was the passion worth the pain? I vote no.

Weisz has received a lot of accolades for her performance as Hester, whose pain and confusion she plays very well, but for me, Beale brought all of the life to this movie as her tea-toting, mama’s boy of a husband. The first half swings between extremely long shots of Hester either idolizing Freddie or torturing herself by agonizing over his absence and intentions. Both Weisz and the filmmakers do an excellent job of showing us why she puts up with Freddie by including extended sequences of the delight he brings to her life, but after a short while it’s like watching her repeatedly drive at full speed into a brick wall. When William shows up again, his presence brings with it interesting questions about the ideals of passion and love, what exactly one has to do with the other, and if you had to choose between them, which would it be? Those conversations feel exploratory and worthwhile where the rest of the movie feels morose to the point of stagnation. I always know a movie is slow when I find myself composing the sentences of my review in my head instead of getting lost in the story. I spent probably an hour and 20 minutes of it’s 98-minute running time lining up what you’ve just read.

My personal opinion: If I had rented it, I would have turned it off way before it got to any of the good parts. Skip it.