In early January, I received an unexpected offer to take a press trip to Bora Bora, one of the top honeymoon and romantic destinations in the world. As it happened, I’d also be there on my birthday. The downside was I’d be alone, but who turns down an all-expense-paid trip to paradise? I’m sure glad I didn’t.

Formed by a volcanic eruption some 4 million years ago and considered a geological work of art, the island of Bora Bora is an inactive, sunken volcano ringed by a coral string of tiny islands, or motus, protecting the island and inner lagoons teeming with countless species of amazing marine life.

The island of Tahiti is an eight-hour plane ride from Los Angeles, but Air Tahiti made the experience pleasant with attentive flight attendants and a sleeping kit that included eye covers and earplugs. From there, I took the short flight to Bora Bora, where I was swept up by Four Seasons’ signature service and impeccable attention to detail. A young intern greeted me by name with a lei of fragrant Polynesian flowers and whisked me out to the dock and onto the hotel’s “taxi”—a smartly appointed catamaran. No waiting, no bags to retrieve—instead, a cool hand towel and bottle of water to refresh myself while we zoomed over to the private small islet Four Seasons shares with The St. Regis.

We docked alongside Four Seasons’ simple yet elegant open-air reception area where an entourage greeted me with fresh mango juice and a sincere warmth normally reserved for dear friends and family. Since water surrounds everything in French Polynesia, docks take the place of curbside pickups and drop-offs. In fact, except for cars on the main island, you can only get from place to place around the motus by boat, foot, or buggy cart. Four Seasons’ Manager Lucy Benyamina escorted me to our buggy and drove me to my “room” to freshen up before lunch and a tour of the resort. 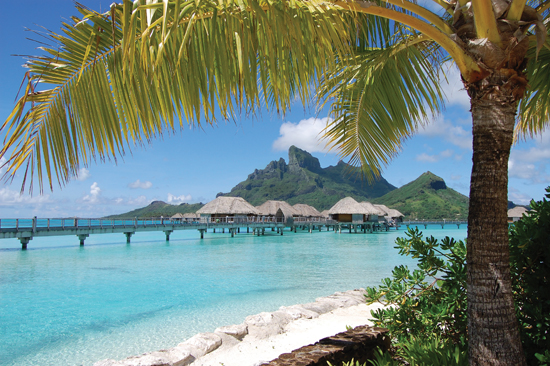 Perched On Stilts Over The Water

My room was actually one of those overwater bungalows pictured in luxury travel magazines. My 1,100-square-foot bungalow, large enough for a small family, was accessible by a pontoon jutting into the lagoon. They had upgraded me to a mountain view, but I would have been just as happy with the beach, lagoon, or resort views.

Covered by a charming, thatched roof made from the leaves of the indigenous pandanus trees that are woven by local craftsmen, every bungalow has a spacious living room, luxurious bath, grand master bedroom, and an outside deck that runs the full length of the backside. The architecture uses light wood to harness the island’s ample natural light and prevailing breezes. Outside, two private lounge chairs, a covered eating area, and private deck with outdoor shower mean you can sunbathe and snorkel (gear is conveniently stowed in a chest on the deck) without ever leaving your bungalow.

After giving me some time to get settled, Lucy retrieved me, and we rode through the resort’s winding trails amidst 54 acres of lush native vegetation that feels intimate despite its sprawling size. We concluded our tour at Tere Nui, the open-air restaurant overlooking the main infinity pool, enormous private cabanas, and beach.

I ate every bite of my Polynesian Platter, which included small colorful plates of Wagyu beef and green papaya, lagoon fish with coconut tree heart salad, and pineapple carpaccio. I felt so far away from home, I was certain it must be 5 p.m. in Chicago, so I had a glass of wine, too. Lucy dropped me back at my bungalow for a much-needed nap in my ultra-comfortable king size bed. 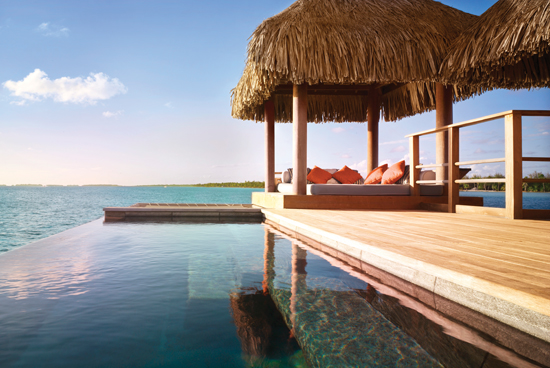 Don’t Forget To Look Up

Later, at dusk on my first evening, I ambled along the resort’s paths and footbridges, stopping to look at the tropical fish clearly visible from above the water’s surface, trying to snap a picture of the earth crabs as they scurried for cover. While sipping a sublime vanilla mojito at the appropriately named Sunset Lounge, I watched the fiery globe of sun melt behind Mount Otemanu’s proud profile—the ridge of the mountain resembles a Grecian male face tipped backwards looking up to the gods. The sky quickly melted into shades of dark salmon, golden papaya, and rich vermilion before darkness revealed the stars.

I was dining solo, but didn’t feel alone at all. A couple seated next to me were identifying the constellations above with their iPad app. Before I knew it, another couple and I had downloaded similar apps to our phones and were oohing and ahhing over the spectacular universe above. I dined on the freshest lagoon fish that had literally “been swimming a few hours earlier” and got a buggy ride back to my bungalow for more stargazing on my private deck—in my pajamas. I hoped the remainder of my experience wouldn’t pale in comparison to this magical evening. 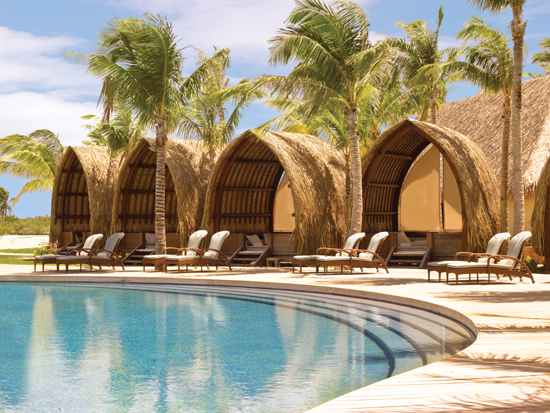 The next morning, after a breakfast buffet that offered both Japanese and American options—I had miso soup, smoked fish, and sushi rice, fresh coconuts pierced with straws for drinking, spicy marinated mango slices—I approached my afternoon itinerary with a bit of trepidation. Lucy had arranged a private lagoon snorkeling tour with Four Seasons’ own marine biologist, Oliver Martin. Not a strong swimmer, and definitely not a fan of even tepid water, I bravely trundled over to Oliver’s office at my appointed time with snorkel gear in hand.

The Ruahatu (meaning god of the Ocean) Lagoon Sanctuary is a research facility where Oliver has spent the last three years cultivating a coral nursery and reef restoration program to encourage growth of the delicate ecosystem. Pulling out large maps, Oliver gave me a brief primer on coral and showed me how he takes small coral nubbins, grafts them onto sticks under the water, and waits to see which ones will adapt. Fish and marine life naturally follow. I was so caught up in Oliver’s passion for his work that I plunged right into the lagoon water, which happened to be the perfect temperature. After feeding the plank fish with baguettes from his pockets (Oliver is French), we swam the length of the lagoon with Oliver in the lead. We swam over eel, tried to coax out the lagoon’s octopus, and examined the progress of his coral grafting.

Oliver’s lagoon tours are a great educational opportunity for children, who can spend their days at the resort’s Kids for All Seasons activity center with its fabulous splash pad, and teens, who’ve got their own Chill Island with its own private beach, clubhouse, beach volleyball, and water sports. I was now officially hooked on snorkeling, but had to hurry back to my room for an open-air bath and dinner with Lucy in the five-star Arii Moana Restaurant. 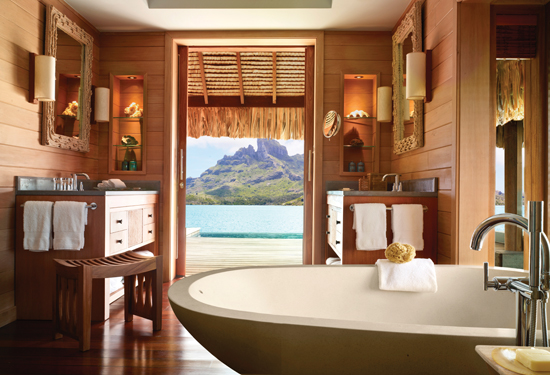 Sunday was my birthday, and with true Four Seasons’ hospitality and attention to detail, they didn’t forget. Everyone I encountered throughout the day, including staff members I hadn’t met, greeted me with “Happy Birthday.” The amiable concierge, Etienne, had booked me a half-day excursion to snorkel and swim among blacktip reef sharks, stingrays, and countless colorful species of fish and coral gardens. I shared my excursion with Houston Texan linebacker Mario Williams and his girlfriend, Erin.

Despite Mario’s commanding presence, even he was a bit reluctant to get into the water among the sharks. But Oliver explained that sharks don’t attack in the South Pacific because their habitats have not been destroyed. So Mario, Erin, and I jumped in together and marveled at the fish (and the 8-foot sharks!) swimming around us. From there, we pulled up anchor and went to feed stingrays that circled around our legs and snorkeled among breathtaking coral gardens befitting a royal palace. On the way back, our guide took us past the two-story presidential bungalow at the Hilton Bora Bora Nui Resort & Spa, the one the Kardashians stayed in last year.

Back on land, I hurried over to The Spa at the Four Seasons to a crisp glass of mint herbal infusion tea and a cooling towel, especially welcome after my morning out on the water. It’s obvious why the Four Seasons Spa has earned its many awards, including recent designation as best spa in the Pacific by Spa Magazine and best spa in French Polynesia by SpaFinder Magazine. With its towering 72-foot cathedral-like walls and ceiling, the spa is strategically situated on the high summit of the resort’s motu, where the energy of the Pacific Ocean on the east meets the tranquility of the lagoon to the west.

The staff’s singular focus was on my comfort and relaxation. Prior to my treatment, I spent some time in the indoor relaxation room, sipping vanilla tea until my spa therapist came in to escort me to the outside deck of my private treatment room for the two-hour Kahaia Haven spa treatment. She began with a Maeva foot ritual: washing, exfoliating, and then massaging my feet with a detox oil to cleanse the body of impurities and prepare me for the transformative treatments to come. Inside, with doors open to let in the sound of the Pacific, she gave me an exfoliating Kahaia body scrub with legendary Tahitian black pearl powder and native fragrant vanilla, followed by an exquisite hot stone massage, and concluded with a holistic express facial. Needless to say, I was de-stressed.

That evening, I was invited to dine with Resort Director Rajiv Malhotra and his wife, Susmeeta. He and Sue were easy, gracious hosts. We sampled a new sweet and savory cocktail the bartender was perfecting, shared sushi, and talked about our children, bucket lists, and the places we’ve traveled. A birthday platter of desserts with “Happy, Birthday, Elaine” written in raspberry sauce was literally the icing on the cake.

All too soon, it was time for my poignant departure from paradise. After boarding the 5 p.m. catamaran ride over to the main island, the staff, including Rajiv, Lucy, and Etienne, stood on the dock and waved goodbye until we were out of sight.