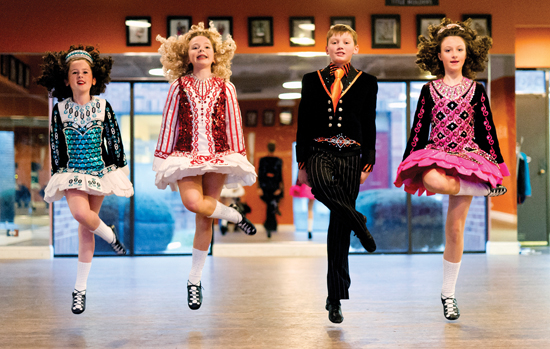 If it’s possible for Irish dancing to be in your blood, Eileen Mulhern O’Kane and her sister, Coleen Mulhern Malloy, both Hinsdale residents, would have it.

Their parents, Brian and Bridie Mulhern, emigrated from Ireland and enrolled all seven of the Mulhern children in lessons. But Coleen and Eileen, the youngest of the brood, were different—unlike their siblings, they never outgrew the sport. “We were the ones in the family that went the furthest with it,” says Eileen.

It was entertainer and dancer Pat Roche—“a huge figure in the Irish arts community,” says Eileen—who took notice of their talent and encouraged them to continue taking lessons. Among the Mulherns’ other teachers was the Lord of the Dance himself, Michael Flatley. The Mulhern sisters were students for the five years when the South Side native had his own Irish dancing school. “Looking back, you could tell he was really going to go someplace,” says Coleen.

Coleen and Eileen eventually started careers in business and engineering, respectively. Eileen says, “We were both successful in our careers, but dancing was our passion.” So, in 2001, they became certified to teach and opened their own studio. Now they’re proprietors of the Mulhern School of Irish Dance, 414 Plaza Drive in Westmont.

The sisters usually have between 150–175 students and divide their time between many locations. Besides their Westmont studio, where they’ve been since 2006, they teach at The Community House in Hinsdale, the Irish American Heritage Center in Chicago, and a location in St. Louis Park, Minnesota.

Irish dancing can bring to mind disparate elements from other dance traditions—the elegance of ballet and the speed of tap or clogging, for example. It can also be extremely competitive—there is usually an Irish dance competition going on someplace during any given week of the year, according to Eileen.

The real big leagues, however, is the Irish Dance World Championship, usually held during the Easter season in Ireland. Twenty-one of the Mulherns’ students qualified this year for the competition in Belfast, and four of those even qualified for the top 10 finishers in their categories.

The discipline and hard work it takes to go so far come as no surprise to the Mulherns. The classes “train them to be the best dancers all around,” Eileen says.

Most students develop an endurance that translates to other sports, according to Coleen. “Many of them become really good in soccer or gymnastics,” she says, adding that she and Eileen try to convey a sense of pride and excellence to their students. “Every child should get the most out of the sport; they know that they are going to have to work hard.”

The Mulherns say they’ve had some inquiries about taking on adult students. “We’ve had people say, ‘The Irish dancers are in such great shape, can we do that?’” Eileen shares. “I always say that I’ll do that when I decide to start teaching 10 days a week.”
The girl-to-boy ratio is quite high; there are only about 20 male students, at the Mulfords’ school. “The boys definitely are a minority,” says Eileen. “But the boys who are in it get quite a workout; girls bring a certain elegance to Irish dance, but boys have to be tough and physical.”

Not all students compete, of course. Some are content to perform at various recitals throughout the community. They’ve taken part in Hinsdale Hospital’s ice cream social and, of course, St. Patrick’s Day parades. “But we like to get out there for things that don’t have to do with St. Patrick’s Day,” Eileen says, laughing.

Both sisters say they’re glad to bring their own childhood love to students of the next generation.

“This is just something that we did,” says Eileen. “Many parents took their kids to gymnastics lessons, we went to Irish dance lessons—none of our friends knew what we were doing, but we never knew anything different.”

For more information about the Mulhern School of Irish Dance, visit mulhernschoolofirishdance.com, or call 630-789-1127.