Jean Seberg peddling the New York Herald Tribune along the Champs-Elysées…Fred Astaire, Audrey Hepburn, and Kay Thompson singing and dancing as they ascend the Eiffel Tower.

Much of what we think we know about the City of Light was dreamed up on Hollywood soundstages; there are many sides to Paris that movies cannot begin to capture. But there is no denying how much cinematic history is inscribed in the geography of the city.

With just a few days in the city’s most sumptuous arrondissements, movie lovers will come across countless locations that have inspired many of their most treasured film memories. A longtime cinephile, I recently headed to Paris to do just that. 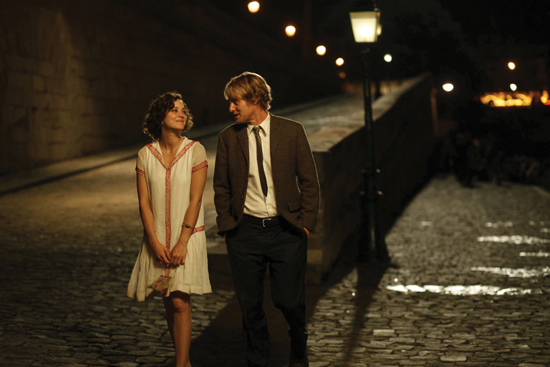 The film I watched on my Air France flight from Chicago to Paris, appropriately Midnight in Paris (2011), turned out to have been filmed at the first hotel I stayed at, Hotel Le Bristol (112 rue du Faubourg Saint Honoré 75008; lebristolparis.com).

Le Bristol was the home away from home for Gil Pender, Owen Wilson’s character, in between his time-traveling sojourns. It’s easy to see how Woody Allen would have chosen Le Bristol for a setting. It was one of eight hotels designated in early 2011 as a “palace” by the French government, meaning it excelled above all others in a number of realms, among them quality of service, quality of dining facilities, and historical significance.

As I was being led to my room, a white Persian cat crossed my path. This, I was told, was Fa-Roen, the hotel’s mascot, who’s allowed the run of the place. Lucky cat.

My suite overlooked a beautiful courtyard. Planters filled with bright red carnations dotted each balcony, and a fountain trickled peacefully at its center. Late that first night, as the clock struck midnight, a friend and I stood on the balcony and waited for the spotlight from the Eiffel Tower to shine overhead. It did so, precisely on schedule, illuminating the nighttime clouds and briefly shining upon the entire courtyard…a beautiful way to spend midnight in Paris. 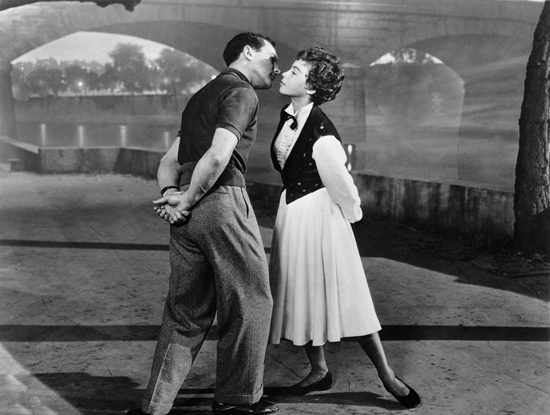 My second hotel, Shangri-La Paris (10 Avenue d’Iena 75116; shangri-la.com/en/property/paris/shangrila) is no stranger to movies either; a forthcoming comedy, Comme un chef (2012), stars Jean Reno as the hotel’s chef, and the hotel’s exterior can be very briefly glimpsed doubling as Miss Piggy’s Paris Vogue offices in The Muppets (2011). In the 1993 remake of Sabrina, Julia Ormond gets out of a cab on Avenue d’Iena outside the Shangri-La Paris; she’s also working for Paris Vogue.

The 16th arrondissement, where the hotel is located, is often referred to as one of the sleepier sides of Paris. It’s mainly a residential district, but what it lacks in nightlife, it more than makes up for in prestige—the Rothschilds and the Rainiers, to name just a few, have called it home. According to my old Let’s Go Paris Travel Guide, some of the residents “forbid their children to sing ‘La Marseillaise,’ the anthem of the revolutionaries who beheaded their ancestors.”

The most famous film to shoot in the 16th, however, did not show off the arrondissement’s regal side. Last Tango in Paris (1972) instead showed off the city at its steamiest. Filmed largely at 1 rue de l’Alboni, it featured Marlon Brando and Maria Schneider as lovers who regularly tryst in a shabby apartment, just after he’s widowed and just as she’s about to be married. Another famous location is seen in the film’s opening scene when Brando screams in agony under the Metro tracks at Pont de Bir-Hakeim—it’s a moment tourists often enjoy recreating. The same location features prominently in 2010’s Inception.

The 16th has one of the highest concentrations of museums in the world; visitors can spend days marveling at everything from Asian arts to the classical Impressionists. Musée Baccarat (11 Place des États-Unis 75116; baccarat.com), with a new décor by Philippe Starck, features “talking” vases and an underwater chandelier. In The Bourne Identity (2002), it was the home of the dictator who Clive Owen’s character assassinated.
The Shangri-La Paris, which opened in late 2010, is a restoration of Palais d’léna, the residence of Napoleon Bonaparte’s grandnephew Roland, a well-known geographer in his own right, to all its late 19th century brilliance. The interiors were restored by Pierre-Yves Rochon and fuse the “Empire” characteristics of the building’s original design with Asian flourishes that reflect the hotel’s Hong Kong-based owners.

My suite on the sixth floor opened up onto a spectacular view of the Seine and the Eiffel Tower. Jet lag usually hits me the second day of traveling, so I ended up waking at dawn. It was unseasonably warm for late September, and I sat on the balcony and watched the city, bathed in its characteristic pinkish-red light, come to life. 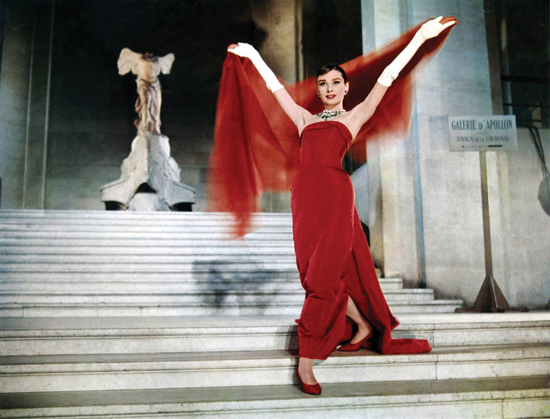 PUTTING ON THE RITZ

Two of cinema’s most frequent travelers to Paris were Audrey Hepburn and Fred Astaire. Few films have been as enthusiastic about armchair travel as their one film together, Funny Face (1957). The “Bonjour, Paris!” number marks their arrival in the City of Light, and along with their co-star, Kay Thompson, they each visit dozens of famous Parisian locales. It’s Thompson who ends up on the doorstep of the Ritz Paris (15 Place Vendôme 75001; ritzparis.com), where she happily engages the doormen and bellboys in a soft-shoe.

The Ritz, once home to Coco Chanel and site of the bar that Hemingway “liberated” from the Nazis, is scheduled to be closed for two years for renovations—reportedly because it missed out on the “palace” designation—but still looks pretty much the same as it did in the movies. The day I visited, a large bridal party was filing in and out of the hotel between wedding photographs in front of the entrance. Panhandlers and grifters stopped sightseers by distracting them with cheap jewelry they claimed to find on the ground.

The square is still dominated by the Colonne Vendôme, erected by Napoleon to celebrate the victory at Austerlitz. Maurice Chevalier used it to spy upon Gary Cooper, who was trysting inside the Ritz with Audrey Hepburn, in Love in the Afternoon (1957). Hepburn also visited the hotel again when she co-starred with Peter O’Toole in How to Steal a Million (1966). The hotel also hosted a Marx Brothers-themed ball in another Woody Allen film, Everyone Says I Love You (1996).

I was staying just around the corner at the Mandarin Oriental, (251 rue Saint-Honoré 75001; mandarinoriental.com/paris). Newly opened in 2011, the hotel seems a bit more New York than Paris, but its beautifully appointed Art Deco-inspired lobby opens onto a spacious open-air garden. The location is one of the hotel’s most distinctive amenities; rue Saint-Honore features some of Paris’ most exclusive shopping. The area is dotted with some of the most famous purveyors of luxury in the world: Chopard, Dior, Piaget, Christofle, Goyard, and Charvet, to name just a few. I expected Audrey Hepburn to step around the corner at any moment.