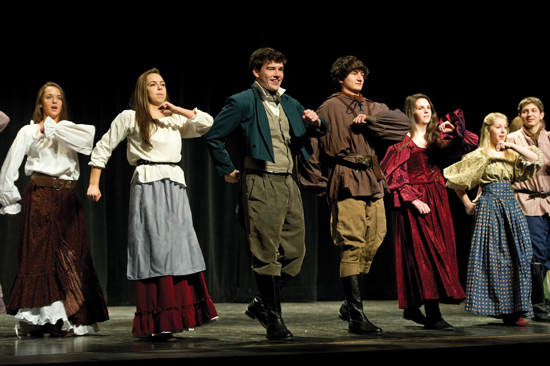 It will take 55 cast members, 45 orchestra members, 30 crew members, 20-plus parent volunteers, six school faculty and staff, six student assistant directors, two professional choreographers, and a professional set and lighting designer to pull off this year’s Hinsdale Central High School behemoth production of Les Misérables. It’s probably safe to say that not many high schools possess the experience, talent, and energy required to do this, and do it well.

Hinsdale Living sat down with Drama Director and English teacher Christine Hicks and Music Director Jennifer Burkemper to get the backstage scoop on what it takes to put on a production of this magnitude. Chris brings her extensive experience to the team—this will be her 61st musical with HCHS. Jennifer not only teaches and coaches vocals for the show, but will play clarinet and keyboard in the orchestra for the production.

Hinsdale Living: How do you go about selecting your annual musical and what motivated you to take on Les Misérables this year?

Christine Hicks: We look at our students [seniors] and strive to give them a variety of experiences over their four years. We look at what we can add to that four-year plan and at what kind of student talent we have available. We realized that if there were a year to do Les Miz, this would be it.

Jennifer Burkemper: We have a huge amount of talented students planning to study music in college. Two of our seniors have been accepted for early decision in drama and vocal performance at Northwestern University for the fall. We also have a great orchestra and a strong group of dancers too.

HL: A show of this scope must take a lot of planning and rehearsal. How did you prepare?

CH: We started earlier than normal this year with auditions in November. We wanted the kids to know they were cast so that they could limit their other outside commitments. We met a couple of times in December and have been at rehearsals every day after school from about 3:15 to 6 p.m. since final exams were over in January. Students also gave up the President’s Day holiday to rehearse.

JB: We gave them the scripts right away and homework over winter break to learn their music. We also added evening rehearsals when the cast comes in with the orchestra under Jeffrey Wirtz, Orchestra Director, to rehearse. We started this earlier than ever before because Les Miz is essentially an opera. With no spoken dialogue, everything is in the music. So it has got to be a collaborative effort, and both the orchestra and cast developed a sense of cohesiveness earlier.

HL: What are some of the challenges you’ve faced?

JB: Because there is no speaking in Les Miz, it’s been a big shift in gears for the kids and the coaches. All of the acting coaching happens within the music, so we have to figure out how to get that student to become that character while singing. Plus, there are so many solo lines [within the different numbers] so that every cast member is featured in the show at some point. But this makes it more intricate in terms of coaching and lighting and sound. It should all look seamless to our audience.

And, we are using a lot of body microphones for the production. For some, it’s their first opportunity to use a body mic, and there is a learning curve involved.

CH: Yes. So where they would typically learn dialogue, they have to learn pitch and rhythm. And they have to convey emotion through the structure given in the music, which is quite a challenge. And, we are dealing with a wide range of experience—for some, it is their first musical and for others their fourth. We also had a fight choreographer come in to help teach how to have fight scenes safely.

HL: How are the students handling the rigorous requirements?

JB: They have really lived up to our expectations, and teenagers are fun to work with. They know the importance of doing this and they respect the piece—and that is showing in their work ethic. The pressure is on, and expectations are high, but we all said, “If we’re going to do this, let’s really do it right.”

CH: We have four student assistant directors this year compared to the two we usually have. Scenes often have all 55 kids in them—the assistant directors help me with blocking, checking in forms and costumes. I asked one student to work with an actress to get more character out of her character. I had another student make a chart of each character’s entrance and exit in every scene, so that we could plan for the body microphones.

HL: What about set design and the crew’s role?

CH: The set includes a rolling staircase, an 8-foot high colonnade that stretches across the stage, and a barricade constructed out of large pieces furniture. The entire set was built by students under adult supervision. And the crews are masters at doing five things at once. They were working on Les Miz, then had to take a break to get ready for the Variety Show, then pick up again where they left off. Our mantra has been, “Keep out of the way of the moving stairs!”

HL: Is there anything else significant about the fact that you are producing Les Miz?

CH: I hope the students will see the parallel. While it is set in the 1820s, the script is really about young people being the agents of change. It is a story of redemption and the change they are trying to make in society—they are the impetus of a revolution, and change comes from young people. I hope it will remind them that as teenagers they will be in charge one of these days.