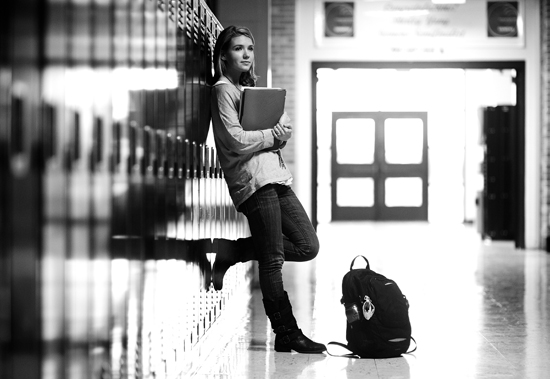 One can be a very lonely number. And one can be all it takes to make a difference in someone’s life—one person, one kind word, one three-minute video that shares a positive message. Hinsdale Central High School senior Sara Klepacki is determined to help teens struggling with issues such as bullying, self-esteem, and depression by using the medium of video.

She made her first anti-bullying video in November of her junior year and has since helped fellow students produce other inspirational videos. And, she’s one of a group of students who’ve started a club called Reel World Central aimed at sharing positive messages with teens everywhere. They just launched their website and released their first video, “The Greatest Advice I Ever Got.” It’s an upbeat, powerful video that the students filmed during their winter break in downtown Chicago.

Here, Sara shares with Hinsdale Living the “who, what, where, why, and when” of her journey.

Hinsdale Living: How did you discover your voice through video?

Sara Klepacki: You know when you find that someone or something, that one thing, that just comes into your life at the perfect time? For me that was film. When I was first getting started as a videographer, I was going through a difficult time in my life where my plans were completely changed. I’d been playing soccer since I could walk. But after I had my fourth concussion while wakeboarding at summer camp in Texas, I knew that my soccer career was over. The things that I thought defined me were taken away. I couldn’t focus and wasn’t doing well in school.

Then I got involved with our school’s Breaking Down the Walls club. I knew students who had been affected by bullying. At the same time, the school needed a video for the November assembly, and I made my “Anti-Bullying Campaign” video. I found that film was a cool way to spread ideas and knowledge. It was my saving grace.

HL: What is it about video that enables you to communicate your message so powerfully?

SK: After making a few small films, I’ve realized that it’s not just about the actual filming and editing. In fact, it’s not even about that at all. The reason I love making videos is because of its infinite capabilities. It is a medium that holds so much power—the power to make people stop and think, the power to improve somebody’s day, the power to spread knowledge. Sometimes, even the power to change people’s lives.

I’m not saying that I’m this mighty little girl that’s capable of changing the world. What I’m saying though is that maybe by making videos I’ll have the opportunity to touch somebody’s heart even if it is just for three minutes. For those three minutes, I can share something with them or make them laugh. One of my biggest dreams is to create a video channel that produces videos with the kinds of messages that are worth being shared. Sounds like some big crazy plans right?

HL: So, is that why you and some fellow students started Reel World Central?

SK: Yes. Reel World Central is a new online community for teens who are victims of, as well as those who wish to learn more about, cyber-bullying, abuse, selfesteem issues, suicide prevention, and other topics that pertain to high school life. We use the medium of video through the YouTube channel to share our videos with teens everywhere, not just at Hinsdale Central.

And I didn’t do it alone. Myself, 10 other passionate student leaders, and 50 students so far are all a part of our new club. I’m privileged to work alongside such remarkable, talented, and beautiful people. The other student leaders are Erik Maday, Meagan Yeh, Zach Wong, Elliott Arnold, Griffin Brewer, Claire Duffy, Ian Ferguson, Ryann Chioda, Alex Ritter, and Angad Ravanam.

Our hopes are to build this YouTube channel from the ground up and shape it into a well-developed online resource. Every other week, members of Reel World Central meet together to brainstorm and work on the upcoming video project, and every couple of months, we’ll release a video on YouTube for anybody and everybody to see.

HL: So your goal is to reach teens everywhere, not just Hinsdale Central?

SK: Yes. Our vision is that these videos will be seen by young people and students all over. Because YouTube is one of the most popular sources of media, hopefully young people will stumble upon our channel’s videos and think that our videos (and our messages) are worth sharing.

Part of the reason we chose the name “Reel World Central” is to keep our school’s name anonymous. We don’t want this channel to be strictly tied with just Hinsdale Central but to expand and be relatable to any high school student.

Hopefully, students will be interested in this club because it gives students a new medium and form of power to share a message to not just our school audience but the whole wide web.

HL: Where do you get your ideas and inspiration, and what are some of your upcoming video topics?

SK: For every video, I am truly inspired by the people that surround me in the halls and the people that I encounter daily. There are nearly 7 billion people out there right now and all of them have stories. That is what inspires me.

I wish I could give you a list of all of the future videos that we have on our Reel World Central To Do List, but the truth is that we are taking it one video at a time. Throughout the year, our list will continue changing and adapting based on the new ideas that come forward. All members of our club have a voice and play a strong role in making videos that weigh closely to their hearts or a message that they are passionate about pursuing.

Visit reelworldcentral.com and central.hinsdale86.org to view the videos that Sara and other HCHS students have produced.