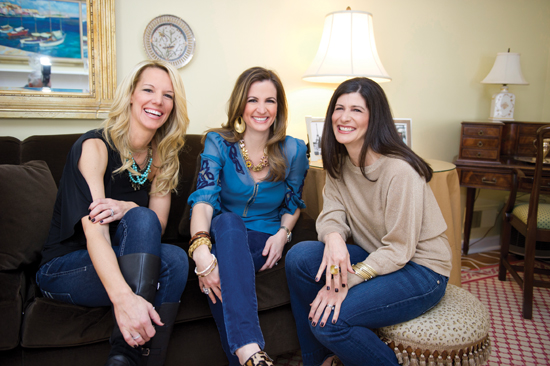 Meet the Hinsdale Junior Woman’s Club—a power-house of energetic young women, wives, and mothers who bring their career experience, passion for helping those less fortunate, and well-honed multi-tasking abilities to the causes they support.

Case in point—their upcoming annual benefit that promises to be the party of 2012. On Saturday, March 3, Hinsdale
Junior Woman’s Club (HJWC or “Juniors”) goes “Clubbin’ for a Cause”—hosting an ultra-hip nightclub benefit to support the families of critically ill young people.

Guests will forget they’re in the western suburbs once they enter the transformed Hyatt Lodge Oak Brook—transported to the chicest club in the South of France, New York, or Los Angeles. Chicago-based DJ Lee Michaels will be at the helm. Eric Ferguson from 101.9fm The Mix’s “Eric and Kathy Morning Show” and actor Colin Egglesfield (All My Children, Something Borrowed) will be the celebrity emcees and live auctioneers.

“What I love about our organization is that it is filled with people that make things happen,” says HJWC President Denise Howe who joined Juniors in 2004. “Women go out of their way to find the time to help others.”

HJWC has more members than ever before with 150 members, 67 who are new this year. Every two years, HJWC selects
a new philanthropy to support. This year’s benefit will raise funds to support Ronald McDonald House Charities of Chicagoland and Northwest Indiana, specifically to help build a “living room” at Edward Hospital in Naperville near the pediatric unit. The living room will provide a home away from home for families with critically ill children in the hospital—with computers, a playroom, televisions, and comfortable furniture. “The goal is to keep families together,” says Denise, “Our work with Ronald McDonald House has taught us that children heal faster when they are with their families.”

“We wanted to create a fresh, less formal event this year,” says Courtney McCarthy, benefit co-chair, now in her sixth year with HJWC. “I joined Juniors right when I moved to Hinsdale on the recommendation of friend. I wanted to do something with my time other that be a mom, to give back and keep my hand in the business world.”

Not only did they create something new, but something fabulous worthy of a night out for Carrie and her Sex and the City girlfriends. People will enter on a purple carpet to have their pictures taken before the wall of sponsors just like in Hollywood—underwritten by Action Photo, images will immediately be projected on big screens throughout the club.

“We’ll have white tufted furniture, glow bars, and a dance floor with glow-towers,” says co-chair Michelle Spellman, who has worked on the décor with event designer Ivan Carlson. Private lounge VIP seating areas tented under sheer curtains will each have a personal server and bottle service with top shelf liquor underwritten by Pernod Ricard. “I take great pride in helping others,” says Michelle, “If I can help one other person, it’s the best feeling I can have.”

Tickets include an all-night open bar, buffets of gourmet food like tenderloin or tuna sliders, chicken satay, and fried ravioli with gourmet sauce. Other highlights will be a magnificent ice sculpture, Tiffany “surprise” bags with values up to $1,000 inside, and 150 silent auction items. High-end live auction items are sure to be a hit: backstage tickets to Late Night with Jimmy Fallon, scouting seats behind home plate at a Chicago White Sox game, five star getaway trips, and a custom-built playhouse. At midnight, the Hyatt (which sits on the campus of McDonald’s headquarters) will bring out “Cheeseburgers in Paradise”—huge trays of McDonald’s cheeseburgers.

“We’re just moms with kids at home trying to make the world a better place,” sums up Courtney. “I feel that if you can leave this life and world having made a difference, it’s a life well lived.”