“Dream different dreams while on the same bed,” says an old Chinese proverb.

No better maxim reflects life in Hong Kong, where thousands of years of Eastern tradition has inexorably been fused to the fast paces of Western modernity.

The city’s character now reflects more than the social fabrics of China and England. The name Hong Kong means “fragrant harbor, “ and like New York City or Paris, everyone here seems to be from someplace else: job seekers from the mainland, European and American expats, tycoons from Japan and India. It’s a largely transient population—many here are looking to make money to take back home—but, for the traveler at least, life seems strangely in balance here.

Car horns blare. Sidewalks abruptly stop midblock. The temperature soars above 90 degrees. But come inside from the frenzied streets, and you’re likely to be greeted by three or four people who will smile and lead you to an exquisite meal, a stiff drink, or the most comfortable mattress you ever fell back on.

Provided you know where to look. With seven million people seeking their fortunes in a city ranked by The Wall Street Journal as the world’s freest economy, you can apply another bit of ancient Chinese wisdom to Hong Kong: “If you have money, you can make the devil push your grindstone.” I got the gist of that on the plane ride over.

Getting There in Your Pajamas

Chicago to Hong Kong is a long haul, and only one domestic airline has been offering direct flights from the Windy City. But starting in September, Cathay Pacific Airways, Hong Kong’s flagship airline, begins nonstop service.

If there was ever a time to splurge on first class, a 15-hour flight is it. The “seats” here are not quite seats, but are instead individual, spacious compartments ensuring ample space and privacy. On my flight from Toronto to Hong Kong, we were served a five-course lunch near the beginning of the flight. The starter, caviar and Balik salmon “Tsar Nicolaj,” was one of many culinary highlights of my entire trip—when was the last time you said that about something you ate on a plane?

Once we finished eating, flight attendants distributed pajamas and slippers as well as a toiletry kit. I rarely sleep on planes, but I had the flight attendant turn down the bed (yes, they did that on this plane). I then found the most New Agey music I could on the headset and closed my eyes. I only slept an hour, but I arrived in Hong Kong feeling more rested than ever. 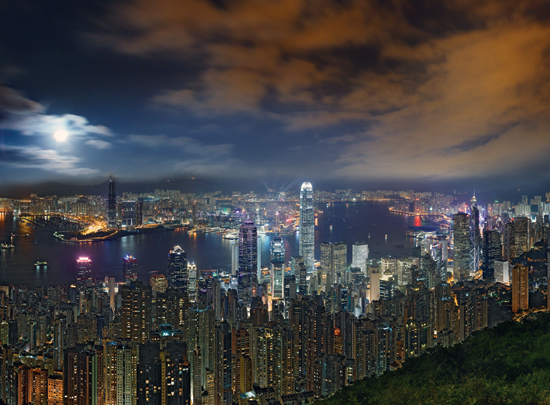 The Largest Chinese Landscape in the World

It’s impossible not to feel dwarfed when you first enter the city. Skyscrapers are stacked dozens of stories tall, but are still overshadowed by the island’s even-higher peaks. People are everywhere, nudging and rubbing up against one another with shopping bags and umbrellas—this is one of those places where, no matter how conscientious you are, you always seem to end up being in someone’s way.

There’s a constant feeling of being in flux. Construction cranes, which are everywhere, are jokingly referred to as “the national bird of China.” Another joke says, “Hong Kong will be a great city if they ever finish it.”
But that contrasts remarkably with Hong Kong’s hotels. The city is home to some of the most famous hospitality in the world—The Peninsula flagship, with its Rolls-Royce Phantom fleet, and the Mandarin Oriental, once the tallest building in the city, are two of the most recognizable.

I stayed at Island Shangri-La, located in the Central District across from Victoria Peak Park. My large, nicely appointed room was on the concierge floor and offered a magnificent view of Hong Kong Harbour. Though I hadn’t filled out a luggage tag anywhere, and I hadn’t seen my suitcase since customs, it somehow got to my room before I did.

I first headed out for a massage in the hotel spa. Outside my door, in the hotel’s large atrium, was a colorful 16-story silk mural, “The Great Motherland of China,” supposedly the largest such painting in the world. I peeked over the ledge of the atrium and was struck by the hotel’s quiet; after a nearly 24-hour journey, I could finally begin to slow down. 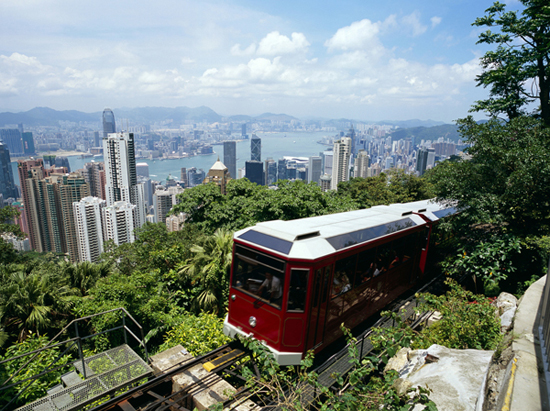 A storm hit the next day. Our trip to the top of Victoria Peak was postponed, and Fred Cheng, our guide, hastily reworked our itinerary so most of our tour was under cover. Our first stop was a Chinese medicine shop, near the Hong Kong Stock Exchange, where Fred explained the principles of yin and yang that go into Chinese food preparation. “We don’t wait until we get sick to take medicine,” Fred said. “Chinese people love to eat food that can give us a lot of nutrition.”

The store was filled with hundreds of jars, each containing ingredients believed to infuse foods with the properties to bring on health and a long life—birds’ nests, abalone, scallops.

The Chinese tend to think of yin-yang as forces of balance, a principle at the heart of Chinese medicinal theory. These components make food whole and, in the end, make right what might be out of balance in a person’s body. It is a long and varied tradition, incorporating ideas that have actually grown up through many parts of Asia. But Fred glumly added that these notions are in danger of being lost over time. “Young people here don’t cook anymore,” he explained.

Hong Kong residents place a lot of hope in their young people. Sons and daughters are expected to care for their parents in old age; the social safety net here is precarious. Parents dote on their kids and invest in them enormous hope. So the parents sometimes go to Man Mo Temple.

Located on Hollywood Road, Man Mo Temple was built in 1848 and is the oldest Daoist temple on Hong Kong Island. Residents can sometimes be found here praying to Man, the god of literature, and Mo, the god of war, on behalf of their children. According to Fred, they hope the gods will bestow their kids with intelligence and discipline.

Approaching the temple, visitors are often overcome by the smell of incense, which practically creates a haze inside. Incense coils hung from the ceiling, while dozens of candles reflected off golden dragonhead urns. Shrines lined with fruit and incense sticks had been set throughout the room. A few locals came in, some carrying their groceries and talking on their cell phones, to pay worship. They scurried around us, lit incense sticks, made their tribute, and left. Before we left, Fred mentioned two other demographics who paid tribute to Man: the Hong Kong police and, in a fine example of balance, the Hong Kong mob.

I had been looking forward to the Mid-Levels Escalator, where commuters living high in the hills make their descent to work in the city. We had to wait until after 10 a.m., when the escalators switched to an ascent.

We stopped on the moving platform and glided past stores and cafes; men and women in business dress hurried past. Suddenly, Fred decided to make an impromptu stop at the fish market.

Housewives rushed about, selecting shellfish that was still moving in the tank for that evening’s dinner. A shirtless man sold fresh vegetables, and another woman cleaned fish. A few souvenir stands peddled ink stamps and postcards off to the side of the street. The place had a rather familiar feeling.

“It’s like Chinatown, isn’t it?” Fred asked, laughing. “Hong Kong is like the biggest Chinatown in the world.” Take away the really fresh fish, and he was exactly right. 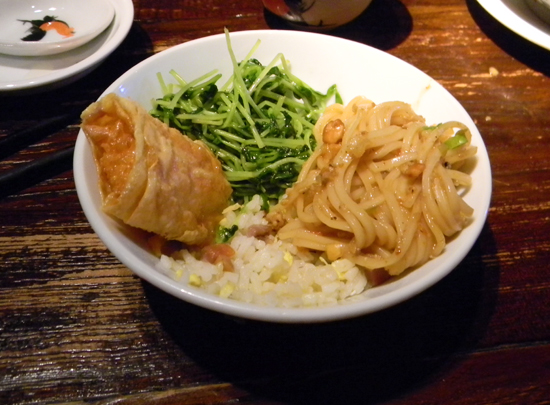 One Key Question: “Have You Eaten?”

That’s usually the third thing someone from Hong Kong asks you, after asking your name and how you are doing. The city is a foodie’s dream, and special occasions are marked gathered around food.

Hotels play a big part in that culture, too. Hong Kong residents usually don’t have the space to entertain, so they repair to hotel restaurants when looking to impress guests or clients. In most U.S. cities, restaurant hotels are an afterthought, usually a breakfast buffet by day and an overpriced steakhouse by night. In Hong Kong, hotel restaurants are a big and dynamic business.

Island Shangri-La showcased their culinary skills for us in a seven-course, evening-long progression through each of their six restaurants. Beginning in the lobby lounge, we enjoyed a glass of Veuve Clicquot and amuse-bouche consisting of lobster medallion and mango bubble as well as duck liver on a melba toast. That was followed by dim sum in Café Too, the hotel’s popular buffet restaurant, which was a bit too frantic for my tastes. Exquisitely beautiful sushi—ball-shaped tuna, salmon, shrimp, sea bream, and avocado temari rolls—came after that in Nadaman Restaurant.

After many hours, and many courses, we were served our entrée, roast Aveyron lamb rack, in the French restaurant Petrus on the top floor. I was enthralled with the dish’s accompaniment, a cabbage stuffed with a delicious, nutty-tasting filling. The menu referred to it as “stuffed cabbage with trotter.” I was letting my guard down in Hong Kong, eating food without asking about it first.

After dessert—rum baba, macaroons, and a cocoa caramel bar with Bailey’s ice cream—I returned to my room and emailed some folks back home about the dinner.

I mentioned the trotter to my mother, a consummate foodie, and she emailed back the next day. “You know that’s pig’s feet, don’t you?” she asked. No, I didn’t, I thought. But I’d eat it again in a second. 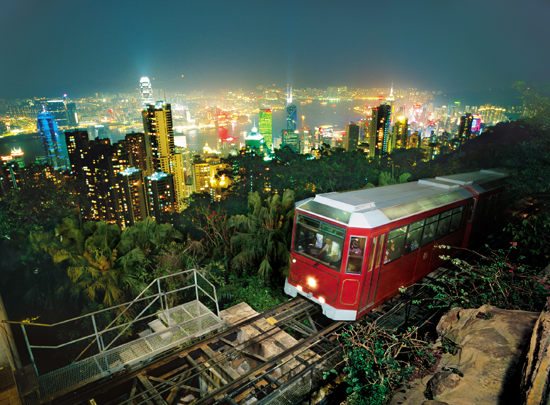 A Peek from the Peak

The rain cleared on the Saturday of our visit, so we finally got to the top of Victoria Peak, which is a must for the first-time visitor. We walked across the street to the park to catch its famous tram. We got there early to avoid the lines, but stopped briefly to enjoy the colorful park, lushly dotted with koi ponds and palm trees. It contrasted impressively with the sleek edifices of Hong Kong’s financial district in the background. The park is also a popular setting for weddings—a marriage registry is located in the park—and we saw several couples posing for their photos.

The Peak rises up to an elevation of 1,182 feet. The tram traverses its steep incline in a manner of minutes, and the ride is fast and rocky. As we rode up, a Japanese tour group was laughing along with their tour guide, who was hamming it up by trying to stay upright for the duration of the trip.

Visitors leave the tram through a cheesy mall that’s safely skipped. Once outside on the Peak’s terrace, they get breathtaking views looking out on Hong Kong Island, Kowloon, and the New Territories. Enormous mansions are scattered across the mountainside; the Peak has historically been home to wealthy European expats, so this is some of the most expensive real estate in the world.

We found a hiking trail that wound its way along the side of the Peak. It led us past thick, green foliage and a small waterfall, all the way to even more impressive views of the skyline and harbor. Numerous locals were out jogging or going for morning strolls. I couldn’t help but think of how perfect and, well, balanced everything seemed. It made for a lovely afternoon.